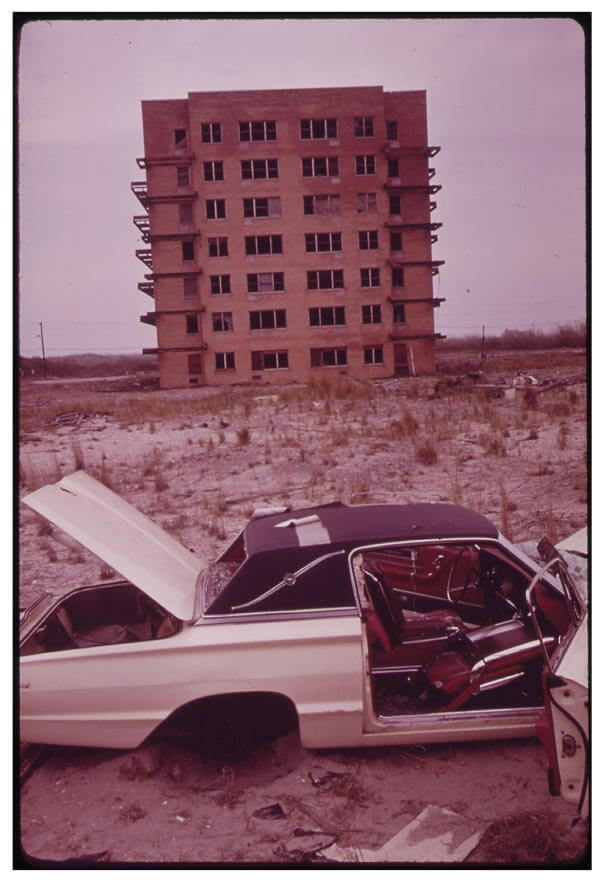 We expected the world to end in fire, or maybe flood. An asteroid from the heavens, perhaps, or a drowning ocean from the melted ice caps. We expected a plague to arrive on every flight that descended into our cities, for our own bodies to rise up against us. We expected something apocalyptic. Something we deserved. We watched the skies and the seas. We watched each other. And we waited.

The first sign we had was when all the people died in that church in Nashville. They went in for morning service in their best clothes and didn’t come back out. Those of us who didn’t love God as much as they did arrived later to pick them up and found everyone inside dead. The bodies were all still sitting in the pews, still holding hymn books, collection plates, cellphones. And, despite what some of us later said, they weren’t all pointing at the Jesus hanging on the wall.

At first we assumed it was a mad gunman or a suicide cult, because it had all the signs of a mad gunman or a suicide cult. Except there weren’t any wounds on their bodies, no traces of poison or chemicals in their systems. The autopsies revealed there wasn’t anything wrong with them other than their hearts had all stopped beating at once. We searched for a reason but there was no reason.

So, as we usually did in those days, we talked of miracles and divine, secret plans. We argued on news shows and comment threads about whether this was the rapture or a freak event, a statistical anomaly. We wanted to know why they were special. We wanted to prove they weren’t.

And then the same thing happened in other churches. Detroit. Little Rock. Houston. That airport church in Toronto. The body count hit the hundreds. We stopped arguing about the existence of God and instead wondered why he was massacring his followers.

And we couldn’t get enough of it. More of us went to church than we could remember in our lives. We watched videos online of people fighting to get into services until the servers crashed, or we were the ones elbowing and kicking others aside to get through those doors before they closed. We prayed—some of us openly, some of us privately—but we all prayed. We prayed we would be next. This was the kind of time we lived in. This was when we thought there was still someone to hear our prayers.

And then it spread outside the churches.

An entire aisle full of shoppers in a Toledo Wal-Mart dropped to the floor in unison, like they were one of those flash mobs. We found the pilots of an Air Canada flight dead in their seats after the plane landed in Vancouver. A squad of firefighters went into an office tower in New York to investigate a gas leak and collapsed in a pile on the cafeteria floor. There was no gas leak.

We didn’t know why they weren’t all taken at once, why instead they died over the course of the summer. Some of us who were experts on the subject—and we didn’t know we had experts until then—went on the news shows to say God was waiting for us to confess our sins before he took us. Or waiting for us to finish our good deeds on Earth. Or waiting for us to finally accept Christ into our hearts. Others of us said heaven was likely a bureaucracy, a government office for souls, and it took a while to process everyone. So we accepted Christ into our hearts even if we didn’t believe in him, and we confessed our sins in the sanctuaries of our bathrooms, and we smiled at each other in the motor-vehicle licensing branches and tried not to get upset about the waiting.

But then it spread to those of us who weren’t Christian. Buddhist monks dropped in the streets in Thailand. An entire parade ground of soldiers fell dead in China in mid-salute. That’s when we worried it was some new disease, a new bird flu. We put on the surgical face masks again, although some of us had never taken them off. Then a hundred men in a mosque in Iran bent to the floor in prayer and didn’t get up again. We ran photos of them in the Iranian state media, row after row of them slumped with their heads to the floor. Forever frozen in prayer. We said it was a Jewish chemical attack. We ran the same photos in the Israeli media. We said it was proof the Iranians were experimenting with chemical weapons. This was back when we still had governments.

But there was nothing wrong with these people who had died either. Our autopsies on the monks showed no signs of bird flu, or any other flu, although many of the monks had undetected cancers related to air pollution. We released medical reports that showed the men in the mosque died just like the others, of failed hearts. We argued about secret weapons and poisons, about state assassinations, until that night when every single person in Jerusalem dropped dead.

We wondered if our gods were fighting and prayed for them to stop, or prayed for them to hurry up and end it all. We prayed to each other’s gods, just in case. Those of us who were still atheist held street celebrations in cities around the world on the same day. We called it Judgment Day. We said the gods were finally taking their own and leaving the world a better place. At last, peace on earth, we said. But when all the atheists dancing around the Burning Man effigy on that Seattle street dropped dead, even the ones dressed like Jesus, we went home and didn’t celebrate anymore.

We grew desperate in our search for a cause, for something to explain it all. We speculated it was a new disease. An AIDS of the new century we hadn’t discovered yet. A new Ebola. We argued about vectors and viral memes. We seized the bodies of the dead, sometimes with legal papers, sometimes with soldiers, and cut open their brains. We couldn’t find anything different in them. Their dead brains were the same as the rest of ours. There was nothing in them.

We were dying and we didn’t know what was killing us. We occupied the abandoned auto factories in Detroit. We cried out that maybe if someone brought the jobs back the dying would stop. We rioted in Paris and burned the Louvre. We shouted in the streets that it was the end of history. We staged coups in Africa and fought border skirmishes in South America. But none of us truly believed some government was responsible for what was happening. Our generals and presidents appeared in the media and apologized for not being able to attack anyone. We launched missiles in random directions into space anyway, in case it was an alien attack. But we ran out of missiles.

A ferry drifted into a harbour in the Philippines with everyone aboard dead.

Passenger jets flew past their destinations and no one responded to our attempts at communication. The pilots of the fighters we scrambled reported no signs of life inside the planes before they went down into the clouds and crashed into the ocean.

Our research bases in Antarctica stopped sending us messages. We didn’t dispatch anyone to investigate. We’d find out what happened to them later. If there was a later.

And then the statisticians and mathematicians among us produced the models that confirmed that whatever was happening was random. We didn’t want to believe the first reports, from the group in Moscow, especially after they turned up dead themselves in their respective apartments. But our autopsies showed there was nothing mysterious about their deaths. They’d been poisoned with radioactive isotopes placed in their tea by some of us who belonged to a security force that was the latest in a long line of security forces. None of us were particularly upset about the killings. We didn’t want to hear the message these dead men had been trying to tell us. We didn’t want all the other deaths to be random. We didn’t want them to be meaningless.

But then the special team assembled by Stanford and Cambridge said the same thing as the Russians did, and Google revealed its Black Lab had come to an identical conclusion. We looked at the patterns and they all said there was no pattern.

It was just random. Nothing we’ve done has mattered. Some of us were taken, but we remain. And now everything is over. We rest in our ruins and wait for a rescue that will never happen. All we can do is relive the past and what might have been. Perhaps we deserve better, or perhaps we deserve worse. But we deserve something.

We expected the world to end.

Peter Darbyshire is the author of Please, which won the ReLit Award, and The Warhol Gang, which will be released in paperback this year. He lives in Langley, B.C., where he is at work on his third novel.
Share Tweet Email Print