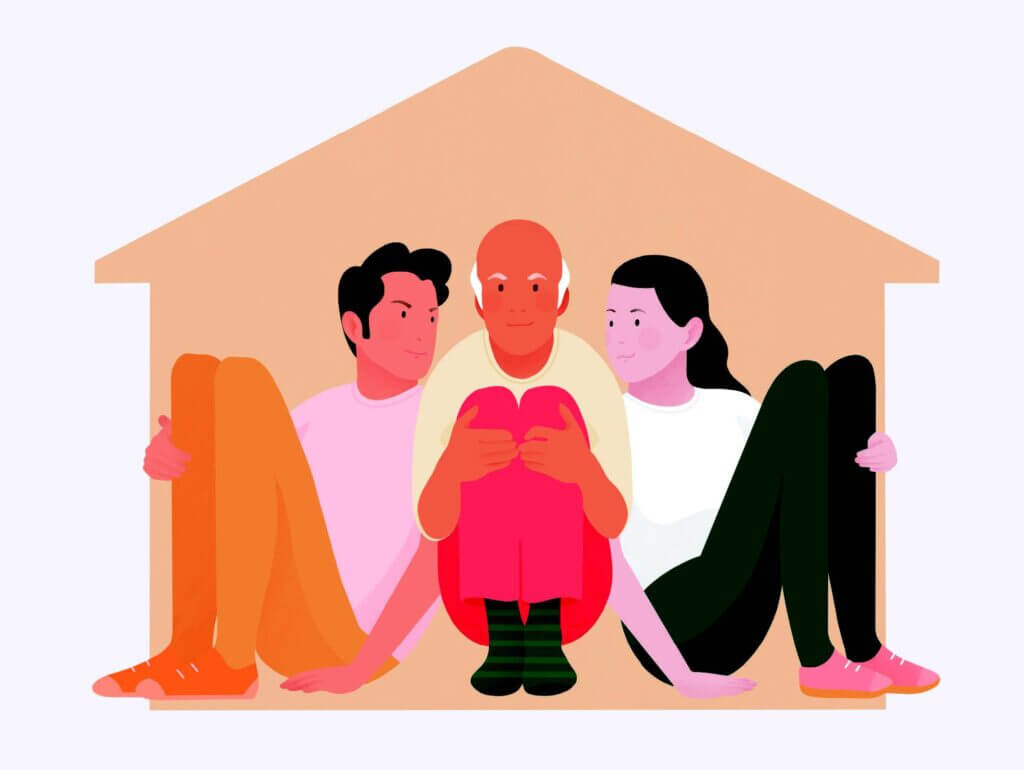 Family has always been complicated for me. My father left when I was three, and by the time I was 10 he had disappeared completely. I left home at 16 and struggled to obtain housing, briefly finding stability in a group home. I moved on to various households with my siblings, partners, and friends. In my early 30s I moved to Hamilton, Ontario, where I met my husband, and over the years we came to the decision not to have children. Witnessing my husband’s relationship with his elderly dad taught me another version of family life, where a parent could be kind and self-contained, always happy to see us, and supportive of our decisions. As the youngest offspring of three marriages, my husband has always been very close to his father. While we have never been certain what shape our future will take, we assured my father-in-law that one day he would live with us.

The pandemic quickly accelerated that trajectory, and what it meant to be the primary companions of a senior. That first spring, my then-87-year-old father-in-law and I began a weekly ritual of playing Scrabble. Prior to the pandemic, we had only played a handful of times. But the routine Sunday game grounded us through the first few months of unprecedented chaos. We watched in shared bewilderment as our lives became smaller and more confined. A soldier in the Korean war, my father-in-law had lived through his share of history-defining moments. It was soothing to know that his world had almost ended before, and yet here he was, teaching me new words on the porch. I kept all of our scorecards, creating an index I intended to work into a poetry chapbook about our deepening relationship.

Twice a week that summer, my husband and I visited his father’s nearby apartment, loaded up with laundry detergent, toilet paper, and groceries. By the fall, it had become three times a week, as we realized that in our absence, he was increasingly eating bread and cheese for dinner. We would visit, make dinner, refrigerate the leftovers, and two days later be back again. For that first year, we didn’t see a single friend indoors, but his dad was at the centre of our fiercely protected bubble. By winter, the constant worry about my father-in-law’s health, isolation, and the effort of stocking two apartments culminated in a shared decision: we would move in together.

Many of my friends watched on in bewilderment, pulling their cellphones out of their toddlers’ gooey mouths as I explained what was happening. The gulf between my friends and I felt bigger than ever, as I recounted the mountain of books, file folders, and trinkets my father-in-law owned, and his determination to move them all. I found us a new rental home that had enough storage space for all of his things, cursing him under my breath as I gave away half of my own books in the process. My husband and I developed a series of looks that flashed between us, denoting our surprise, laughter, or frustration as we shepherded his father through his first move in almost 20 years. Upon his arrival in the new house, after an epic snowstorm trapping the moving truck in the street for hours, he declared that he would never move again. This assuredness struck us with both relief and trepidation. We were so exhausted and stressed out from the months leading up to this day that it was rewarding that he was happy and comfortable in our new home. But, at the same time, there was a finality to his statement that caused us to panic: what would our own future look like now?

Adjusting to living with my husband’s father has been challenging at times, in particular due to giving up the privacy of our marriage. Daily tasks like preparing meals are interrupted by his father’s recitations from the daily newspaper. In the middle of cuddling on the couch with my husband, his dad is prone to walk in, armed with a new fact from a recent YouTube search. I have digested more about world history, war, and nature than I have an appetite for, while my own analyses of feminism, social justice, and popular culture have been met with equal reticence. A retired university professor, my father-in-law yearns for a heated debate on the freedom of speech, whereas any kind of raised voice causes me to shut down, panic, or retreat. This dynamic may be typical of the father-daughter archetype, but having grown up without a dad, the struggles characteristic of that bond remain uncomfortable to me. These entangled feelings of anger, amusement, respect, and love are evidence that I am finally, in my late 30s, learning how to have a father.

Perhaps because of the strain it puts on the younger generation, multi-generational living is not very common in Canada, despite its normalcy in other countries around the world. According to Statistics Canada’s “Housing Experiences in Canada: Seniors in 2018” report, only five percent of seniors aged 65 and over lived in multi-generational housing in Canada. In contrast, 15 percent live in senior residences and long-term care facilities. As the pandemic ravaged long-term care homes, the vulnerability and disposability of elders in Canadian culture was exposed. Disregard for the heightened risks of the elderly was regularly vocalized throughout masking and vaccine debates, while a staggering 34,999 people over 60 in Canada died from COVID-19 by April 2022.

Amidst these figures, seniors face daily accessibility issues exacerbated by the pandemic. My father-in-law is very
healthy, but as an 88-year-old, he has required two emergency hospitalizations during the past two years. Neither experience yielded follow-up care from his family doctor; his attempt at a phone appointment left him waiting all day for a call that never came. Despite his media and technology literacy, he could not navigate provincial COVID-19 websites. Instead, I booked my father-in-law for his vaccines, drove him to his appointments, and monitored his symptoms afterwards. My husband ordered him masks he could breathe well in after he experienced problems with other medical masks. The single attempt he made to go out for coffee under the vaccine passport system left him denied entry to a coffee shop, standing outside in the cold, clutching his clinic-issued proof of triple vaccination in confusion; to be admitted to the cafe, he required a QR code, despite not owning a smartphone. I feel acute rage thinking of all of the individuals and families who have struggled in similar, and more pronounced, ways due to barriers in accessibility, exacerbated by other forms of systemic and individual discrimination.

As the world fluctuates in and out of pandemic waves, my father-in-law’s health, safety, and dignity remains paramount in our lives. While no one can predict what their life will look like in the next five years, my husband and I feel particularly uncertain. Every day, out of step with the majority of our generation, we make unseen decisions that revolve around my father-in-law, and shift our larger life goals in line with his aging.

Each morning, my father-in-law encourages me to notice the birds that frequent the feeders in our backyard. Jays, orioles, and cardinals flash primary colors, swiftly taking flight as my dogs barrel toward them. A year ago, I couldn’t distinguish between their calls, but now they ring out separately. “It’s a nice day today,” my father-in-law says, and means it, peering out over the trees. As he holds fast to what autonomy he has left, my husband and I come to terms with our interdependence. Perhaps this is one of the many lessons of belonging in a family, in whatever shape it ultimately takes.