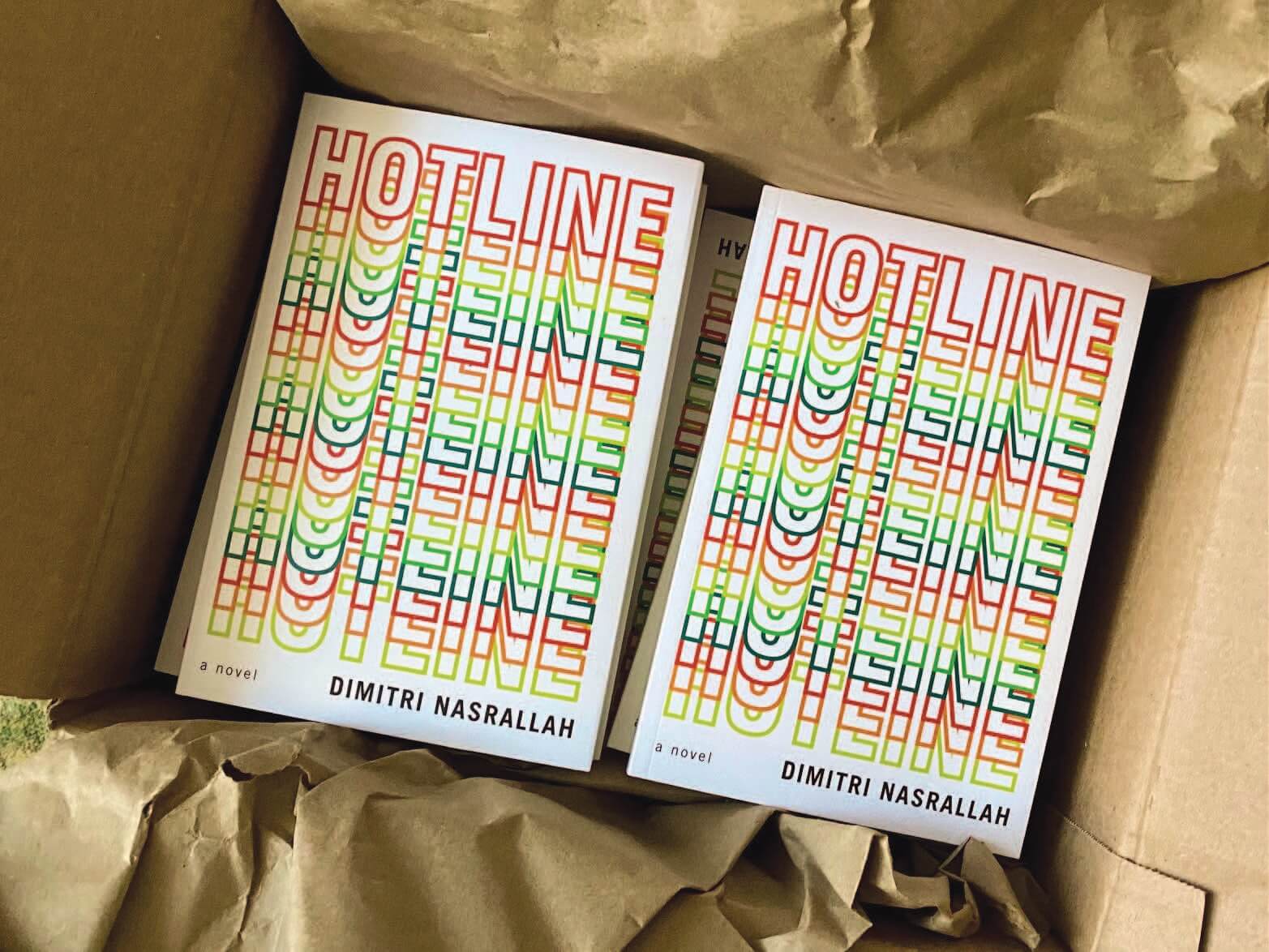 Dimitri Nasrallah’s Hotline (Véhicule Press) transports readers to mid-eighties Montreal when weight-loss centres were a burgeoning industry, and “body image” and “health consciousness” were terms just entering the vocabulary of self-care. Muna Heddad, a French teacher by trade, takes a job as a hotline phone operator at meal delivery company Nutri-Fort when no school will hire her. An immigrant escaping the Lebanese Civil War, she has little alternative if she is to provide a semblance of security for her son, Omar, following her husband’s disappearance from the war-torn streets of Beirut.

Nasrallah, who teaches creative writing at Concordia University, elaborated on his decision to set his novel in the heyday of hotlines.

“There’s always an unsophisticated idealism baked into the possibilities of new mediums,” he says. “A little later on, everyone comes to a consensus about usage and conventions. But there’s a window of time in which people are still figuring [out] what can be done, and that was when this era of the hotline became appealing. It’s an obscure technology now, but in its heyday it spoke to that universal need to connect with others in ways we’ve emulated since with the internet and social media.”

Known for his politically charged writing in books like The Bleeds, Niko, and Blackbodying, Hotline sees Nasrallah taking inspiration from his own childhood, articulating some of his mother’s experiences working as a weight-loss call operator.

“The people who call Nutri-Fort’s hotline and speak to Muna experience the shame that comes with fatphobia,” he says. “They’d dedicated themselves to meeting the many expectations Canadian life was throwing at them, and along the way they gained weight, which set them even further back from where they wanted to be—that consensus ideal of happiness that hangs over all of us,” Nasrallah says.

“For Muna, xenophobia brings a similar shame, of not understanding the way the game is played here and the sense of being manipulated by circumstances [she doesn’t] yet understand. That shared sense of shame makes her sympathetic to the voices she counsels on the phone.”

Muna fears that her Quebecois clients struggling with loneliness and bereavement will sever their ties with her if they discover that she is a French-speaking Arab. This balancing act of appearing sympathetic to callers who would not deign to speak to her outside of a professional scenario is the lamentable if commonplace dynamic at the centre of the novel.

“The anxiety over these two forms of visibility—body image and race—were paired together for me by that situation,” Nasrallah explains. “It was only much later as an adult that I began to see how the two were linked and fit into this larger context of unattainable ideals that are a part of North America’s social fabric.” Nasrallah notes that fatphobia and xenophobia are both fears of the body. “Both come from the same intolerances and are hardwired into the social construct. Both devalue how people see themselves.”

At a time when borders are reopening and immigration numbers to Canada are beginning to rise following disincentives to travel, Hotline documents how social issues newcomers face have root causes that have not been completely addressed four decades later.

“In every historical setting in fiction, there has to be some resonance back to the current moment, something that connects the reader to the material and helps organize the story so that parallels emerge and serve to give the narrative layers of meaning,” Nasrallah says. “When we draw from the past, it’s to understand the present moment, and organize some understanding out of the parallels we see.”