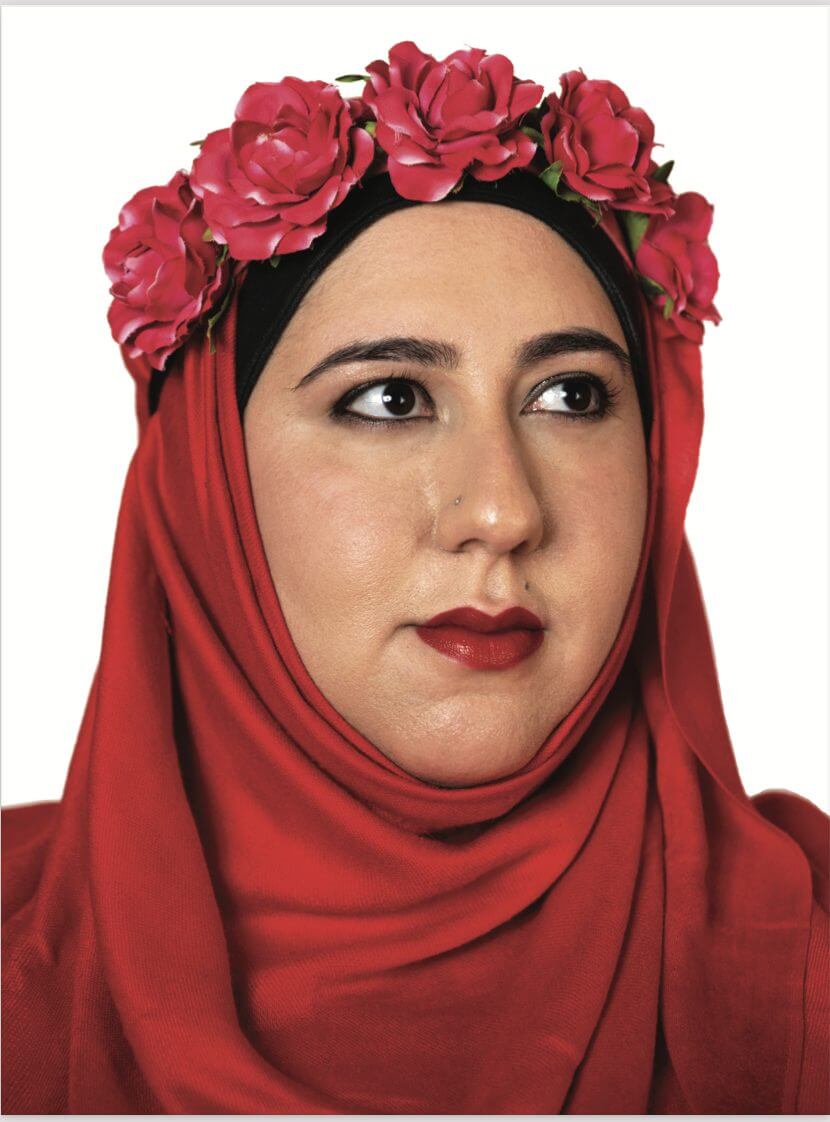 From an early age, Hanan Hazime remembers being immersed in the arts. As a young child, she loved painting, dressing up in costumes, and creating elaborate stories. Now, at the age of 30, Hazime is a multidisciplinary artist whose work ranges from politically charged paintings to nature poetry. As a Lebanese-Canadian, non-neurotypical, and invisibly disabled, Shia Muslim woman, Hazime has had many personal encounters with gendered Islamophobia, racism, and ableism in her life. Her artwork often grapples with these issues and allows others to share and better understand a small part of her lived experiences.

“I wanted to dispel stigmas about Muslim women, about Arab women, about disabled or mad folk, because those are all my identities … My art is trying to show that first of all we exist, and that we matter. And that we can take up space and I think that’s very important to have that representation,” Hazime says.

“Art is the way that I do my activism … I found that people have connected to me more through art, because art affects your soul and your heart and that’s where the change needs to happen,” she says.

While Hazime’s political paintings are important for her self-expression and educating others, Hazime explains that some of her non-political artwork is often rejected by exhibits and collectors as she becomes tokenized for her identity.

She recalls a specific incident where she had written a story about a woman who suspects a mermaid is living in her bathtub. The story was a magical tale exploring women’s sexuality and was rejected by literary publications as it didn’t explore any “-isms” or modes of oppression.

“They are always searching in my story for those ‘-isms’ because they’re automatically assuming that whatever I create is always going to be about these political issues that I’m facing. I can never exist as a human. I always have to exist as this political symbol,” she says.

Building on her passion for writing, Hazime is aiming to have her first novel published this spring. Growing up, Hazime had a difficult time seeing herself represented in mainstream media. She would read two books a day and never saw similar characters reflected in these novels.

“The younger generation, when they look up and they see a Muslim woman creating art, they’re going to think ‘I can create art too. I can write a novel. I can write poetry. I matter. My voice matters,’” she says.

The plot of her novel-in-progress, Unmoored, centres around a Lebanese-Canadian teenager named Zaynab who struggles with mental illness while navigating high school culture. The book is very loosely based on Hazime’s own experiences growing up in a working-class family and not having access to therapy, which she hopes portrays the realities of mental illness for the less privileged.

“It’s basically a book that I would have loved when I was 16. I’m writing it for my past self,” she says.

While Hazime’s work often touches on serious issues dealing with her identity, she explains that she is able to move beyond society’s focus on “-isms” and see people for who they truly are.

“I’m looking beyond race, gender, ability, and class and all those social constructs…. The skin that I’m in is just a shell that I’m in temporarily in this world,” she says.