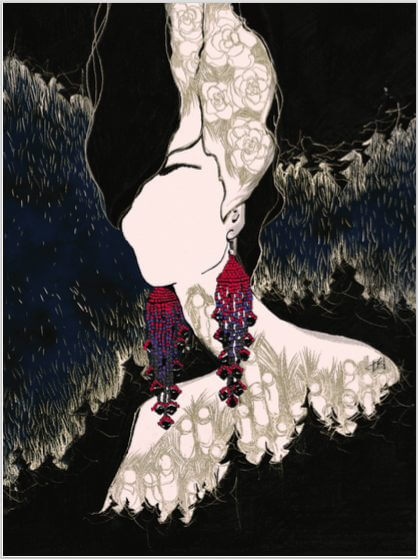 “When are they taking me away?” This was a question I frequently asked my mom throughout my childhood. The first time I wondered this aloud I was three years old. My foster brother and sister had lived with us on and off for two years by then and I didn’t remember life without them. The three of us, close in age, were never apart. They were also Metis but, unlike me, knew their biological family. They spent the first years of their lives with their family and only came to live with us when Manitoba Child and Family Services (CFS) deemed it necessary. They were more than foster siblings. They were my family.

At that age, my world was limited to my parents, foster siblings, stuffed animals, real animals, and extended family. I never fully understood why my foster siblings were able to reunite with their biological family, but I couldn’t. I spent years being told I was special, that I was able to stay with my adoptive family because my first mother loved me so much she gave me to them. Silly girl, I thought, thinking that the parents who wanted their children back were the ones who must have loved them the most. But still, my young mind had a hard time making sense of this. Was I special because another family wanted to raise me? Or was there something wrong with me that made my first family never even want me back for a weekend or a few hours twice a month?

My birth mother relinquished me to the care of CFS as an infant, and I spent the first few weeks of my life with a foster family while my mother was given time to decide if she wanted me back. My birth mother has told me she contemplated taking me back but had been told I would be placed with my new family immediately. She didn’t want to interfere with what she assumed was an already bonded parent-child relationship between the three of us. After this period, my potential new parents, a Mennonite couple from southeastern Manitoba next on the long list of couples registered with CFS, were notified of me, now an adoptable child. They picked me up after having the weekend to decide and I was welcomed by a small party of people revelling in the excitement of a new baby. My new father had 12 siblings, and by that time his parents had dozens of grandchildren and a few great grandchildren. To this day I have no idea where I would fall if we grandchildren lined up by age. Even more, I have no idea where I would fall if those of us adopted into the family, over 30 of us altogether, did the same.

I was the first grandchild on my new mom’s side. They surprised her parents when they brought me home, and I’m told they were elated. Given I was adopted through CFS, they were surprised to find I didn’t even look Metis.

I grew up with foster siblings until I was eight years old. I also grew up with fostered and adopted cousins, aunts, and uncles. All Indigenous, we were raised by our Mennonite adoptive and foster parents. This was my childhood and, in some ways, I considered myself the luckiest child in the world. Surrounded by so many other children like me, I rarely felt alone. We lived within the shelter of our own little community, separated from the rest of the world where children somehow managed to stay with their original families. In our world, no brown child was raised permanently, if at all, by their biological parents. Life was simple. Until it wasn’t. After all, no one is exposed to CFS and simultaneously claims a simple life. I have struggled making sense of a system responsible for introducing much of the pain and trauma my foster siblings and I faced while simultaneously creating such a sense of distorted normalcy in our childhoods. I still cannot decide whether this is something for which I am grateful or something, which utterly breaks my heart. Perhaps it will always be both.

I remember the losses of my foster siblings well, some more vividly than others. I remember sitting at the top of our staircase at five years old, devastated upon realizing I could no longer recall the sound of my one foster brother’s voice and how he pronounced “fries” as “flies.” Fries were his favourite food and he ate them every chance he had. My questioning of when I would ultimately be taken away persisted until I was eight years old. My parents often viewed me as an extension of themselves, a reflection of their achieved goal to ultimately become parents. They were unable to see my adoption as part of how I filtered the world around me, which, I suspect, is partly why they dismissed my fears. This is perhaps also the reason they have never understood my struggle with my identity.

My adoptive cousin, born and adopted 10 months earlier than I was, also grew up with foster siblings. Our siblings came and went, but we remained. He was a constant in my life, a steady presence with whom I searched for toads on my driveway and caught fireflies in mason jars on dark summer nights while our parents played Canasta inside. Afterwards, we would run inside and devour the schnetki our mothers made, delighting in the way the butter melted on the Mennonite biscuit and how it crumbled so easily in our mouths.

When I was seven years old, we dressed up as “nerdy twins” for Halloween. Wearing thick, black-rimmed glasses from the dollar store, we matched our jeans with red t-shirts and baseball caps. (I took the glasses off after 30 minutes when they started giving me a headache.) I had more fun with him than I recall ever having with another living soul. He was the love of my young life. He felt like a part of me, a part of a childhood I always struggled to fully understand.

Something deep in my spirit shattered when we were around eight or nine years old and he was taken back into CFS. By then, I naively thought being adopted meant we wouldn’t be taken away. My parents had stopped fostering children by then, but I spent every night for weeks praying he could live with us. For reasons I still don’t fully grasp, he didn’t. He went into foster care, but even when he returned home years later, our relationship was never the same. We didn’t have our once closeness nor our ability to joke back and forth as we once had. Life was no longer so simple. We never caught fireflies again.

I have faced various losses in my life, including two suicides of loved ones, but the loss of my cousin shaped my life most profoundly. At the same time, there wasn’t the shock that I hear others describe when they encounter similar situations. There was no outrage or confusion at the fact that someone in my life could be taken away so swiftly. I knew by then that this just happened to children like us. There was something about us that seemingly prevented our families, biological or adoptive, from knowing how to care for us. Love alone couldn’t offer us complete protection.

During the Sixties Scoop, from the mid-to-late 1950s to mid-1980s, an estimated 20,000 Indigenous children were displaced from their families. Many of my aunts, uncles, and older cousins were adopted during this time. Both my cousin and I were adopted in the late ’80s, when the system still consisted of closed adoptions and sealed records. It has since progressed to open records, but there is still an overrepresentation of Indigenous children, accounting for 90 percent of the children in care in Manitoba.

My entire life, I’ve heard I should just be thankful. I’ve been told by complete strangers that I must have been adopted into a loving family who spared me the abuse I surely would have encountered had I stayed with my birth family. I’ve been told my experience would be no different if I was Caucasian and that it has “nothing to do with being Native,” although with the overrepresentation of our children within the system, I know being Indigenous has everything to do with it.

Almost immediately after my 18th birthday, the age at which you could apply to unseal your adoption records in Manitoba, I completed the required forms to discover as much of my history as possible. My adoption papers provided basic information about my family, but I had long memorized it all. I wanted more. It took until after my 20th birthday to learn what my name had originally been. It has taken even longer to process and start integrating the complicated layers of my identity. At times, it feels like I am slowly piecing together the broken fragments of a vase without knowing what it looked
like when it was whole.

Recently, I’ve begun sharing my experiences with those closest to me. As a result, my cousin and I have reconnected.
It has been over two decades since we were lost to each other, our relationship forever marred.

I was shocked upon hearing how he related to my struggles with identity. His skin is much darker than mine, his hair much straighter. A near professional at climbing trees and navigating our wooded backyard, he possessed an intuition I never quite had. As a child, I envied him. As an adult, I was surprised to hear of his struggle with identity as an Indigenous man. I’ve now practiced medicine for several years and have encountered many others with similar experiences. I should have known not to be surprised.

He tells me how reconnecting with the land has been invaluable in reconnecting with his Cree culture. I can’t say I’ve found a single entity bridging that gap for me. I’ve reconnected with my birth mother and her family. I was finally able to apply for my Metis card after attaining a copy of my birth records—and although a simple laminated card should not be a factor that confirms a piece of my identity, it did help a little. I found a video of local Metis elders making traditional bannock while speaking Michif and followed along, adding the ingredients to a large mixing bowl. Although similar in taste to schnetki, I have come to prefer bannock. I’m slowly expanding my beaded earring collection, although I still sometimes feel like an imposter when I wear them, regardless of how beautiful they make me feel. I wore a pair of black, red, and purple beaded earrings the day of my graduation from medical school and it helped me feel more grounded as I accepted my degree. My hair hung past my shoulders and no one could see the earrings, but I knew they were there.

My cousin and I continue to walk our paths of integrating our identities, though the feeling of being outsiders remains. At the same time, we both have an unquestionable connection to our adoptive Mennonite culture and are unable to abandon it. I laugh at the irony that I, a Metis woman, continually educate my Mennonite husband around his own traditions and foods. I tell him about schnetki as I shape the bannock dough into a ball on my kitchen counter. I was dumbfounded when he had no idea what I was talking about. I laughed and assured him I would make a few just so he could taste them. It will probably come after a few more rounds of bannock, however.