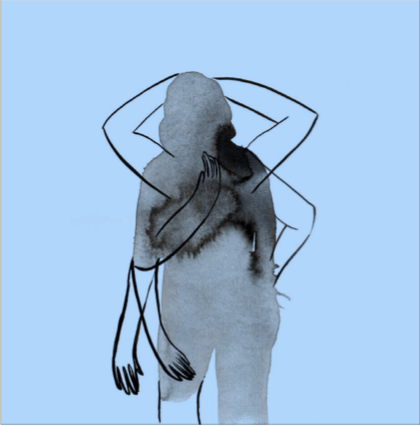 I can’t tell you the exact moment when I went from calling myself “Iranian” to “Persian.” I know that it happened post 9/11 and that the decision was made when I went to a predominantly white middle school. Prior to that, the only time I faced real issues with being Iranian was whenever we crossed the U.S. border. At my new school I went through the unoffcial “being brown orientation,” and within the first week had been called “terrorist” and been offered the Quran a handful of times.

I asked an older student I had been paired up with for peer- advising about this. She was the only other Iranian girl at the school and, in retrospect, that was probably the only reason we had been paired up, since we had very little else in common.

“Stop saying ‘Iranian,'” she advised me. “Say you’re Persian. It makes a difference.”

As a “Persian,” I was part of an ancient, exotic culture that most people did not know to associate with the Iran that was always in the news.

I don’t mean to police people about what they choose to identify as. Being an Iranian in a Western diaspora is a complicated identity to navigate, and every Iranian, of every generation, has their own relationship with their roots.

In fact, someone who is more visibly Middle Eastern than me—someone with darker skin or who is visibly Muslim—may choose to identify as Persian to avoid the blatant racism that comes with being associated with a country like Iran post-9/11.

But I’ve reached a point where I no longer want to think of my identity through a white gaze. Calling myself Persian was the first stop on a slippery road to navigating which parts of my culture and ethnicity were most attractive to my white peers.

I also started pronouncing my name differently and stopped speaking Farsi at home. I straightened my hair and self- righteously declared myself “basically white” whenever I had the chance.

For a country that is always in the news, and was at the brink of a full-blown military conflict with the United States as recently as January 2020, very few Westerners know much about Iranian history. That’s not very unique for the West, of course, and it certainly hasn’t stopped Western invasion and colonization. I’ve been asked if I’ve ever been to Persia. Calling modern-day Iran “Persia” is a little like referring to Italy as “the Roman Empire,” or to Italians as “Romans.”

I grew up in the area known as “Tehranto,” between Yonge and Sheppard and Yonge and Steeles in Toronto. The area is home to the largest Iranian community in a city where the whole population is around 100,000, and is the second largest diaspora community in the West after Los Angeles. It’s impossible not to see the influence of Iranian culture walking down Yonge Street: Iranian grocery stores, restaurants, and businesses sit at every corner, and Farsi is spoken freely and abundantly. I spent my childhood weekends eating in these restaurants and following my father around on errands at these businesses.

I’m privileged to have had access to this rich pocket of diaspora. It allowed me to stay fluent in Farsi, and to know and participate in festivals and activities my cousins, who lived in other parts of the city, could not. I still live close to it, and as an adult it’s an essential part of my relationship to Toronto. But I didn’t always feel good about being from here. As a child it was a burden to feel the community’s gaze, and I felt very strongly that in order to achieve all I wanted to—professionally and personally—I would have to move away from the area. To me, before turning 18, being Iranian meant listening to your parents and never leaving home, and being Canadian meant exploring creativity and new places.

Later, four years at a predominantly white university taught me that white spaces were no place for brown people to be nurtured or have their individuality cultivated. Sometimes being part of a diaspora means having two places that you are attached to, neither of which you can truthfully call home.

Many second-generation diaspora children have always existed in this grey space between East and West. Too many of us have been left to navigate the complex history of our identities by ourselves, and the colonial perspective we get from institutions in the West has done little to encourage us to dig deeper into Iranian history.

It’s worth noting that there are Persians in Iran. Many, in fact. Most population surveys agree that the Persian ethnicity is Iran’s largest demographic, at over 50 percent of the population. You wouldn’t know this by consuming only Western media, but Iran is a very diverse place with many different ethnolinguistic groups. Azerbaijanis, Kurds, Afro- Iranians, Arabs and many other communities call Iran home, with new immigrant communities arriving all the time.

My own family is not fully Persian. My mother’s father is Azeri, a Turkic people who live mainly in the Republic of Azerbaijan and the Iranian region of Azerbaijan. My maternal grandfather grew up speaking Azeri at home, and learning Farsi at school. I do not know any Azeri, though I have been surrounded by pieces of Azerbaijani culture my whole life. Every Nowruz (Iranian New Year), my mother plays Azeri music and watches old films. My identifying as “Persian” over “Iranian” is dismissing my grandfather’s identity—he certainly never referred to himself as Persian.

As with most things pertaining to modern-day Iran, there’s a complicated history that has led to the Persian language being the only language taught in schools. Today ethnic minorities are treated as second-class citizens with limited rights and strict laws that keep them from dressing in traditional garments, and many historical monuments have been destroyed.

The Pahlavi dynasty, the last ruling house of Iran before the Iranian Revolution of 1979, was committed to building a more modernized Iran and credited by many for nationalizing the Persian language and culture. Under their rule, a national ban against minority languages spoken in schools was implemented and separatist movements were effectively suppressed.

The Pahlavi dynasty draws up different emotions for different people. For many middle class and wealthy Persian- Iranians it was a time of important Western-infuenced reforms that allowed women to enter universities and allowed Iran to be recognized as a cultural centre by the world. Many Iranians who live in the Western diaspora—many of whom came from wealthy families—remember a more peaceful and secular Iran.

My grandfather did not have this memory of the Shah. He remembered strict laws that kept Azeri customs away from the public eye, and a forceful hand against anyone who protested the treatment. Iran is not perfect, and the Persian identity is not either. In engaging with a more nuanced understanding of Iranian identity I challenge those of us presently living in the West to move away from white-washing.