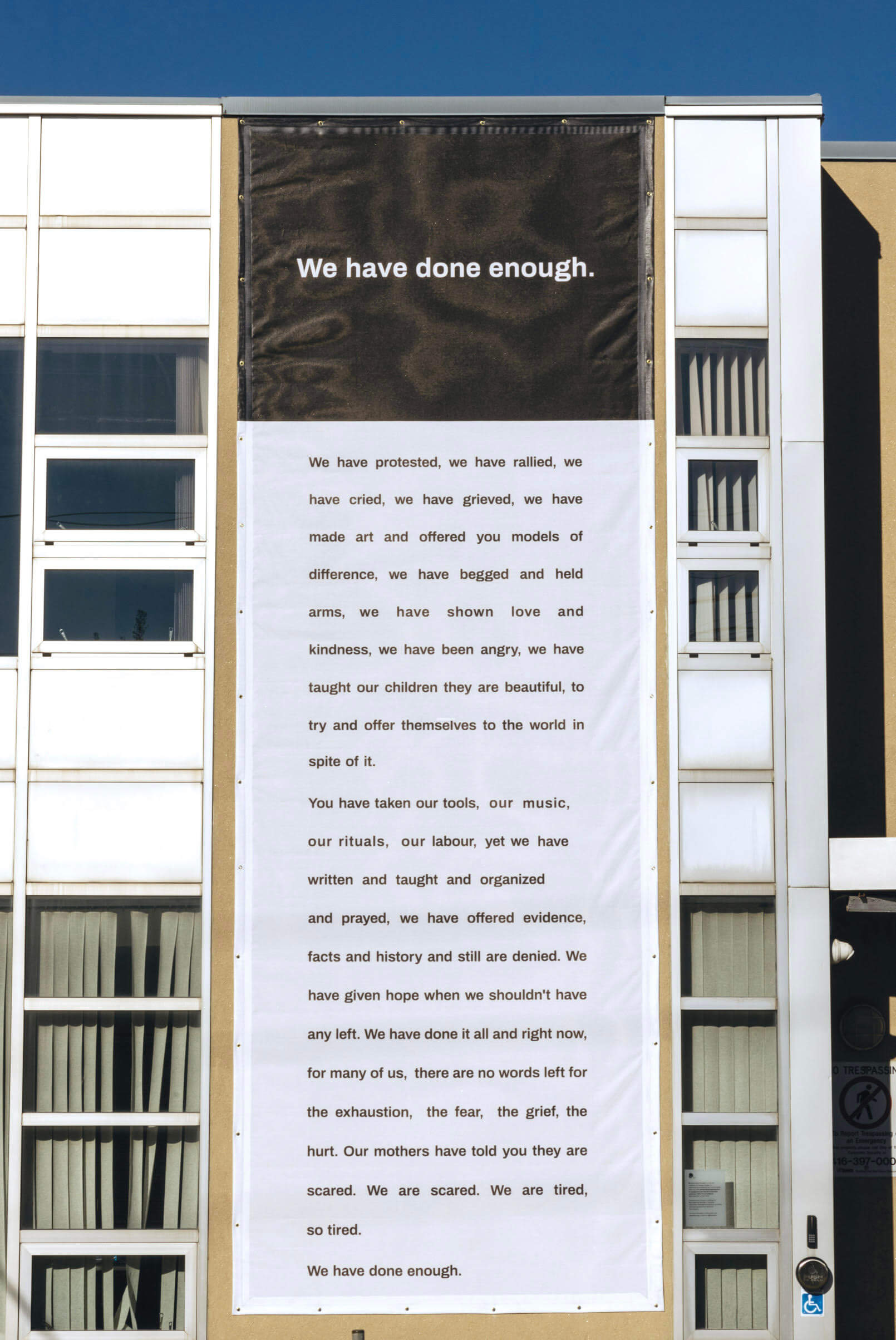 We Have Done Enough by Anique Jordan. Documentation by Nabil Shash.

The energy that fills the room at a book launch surrounded by community is a feeling like no other. Walking into a reconfigured venue with familiar faces, soulful melodies, and warm hugs is one of those experiences I’m grateful to have been a part of before everything changed amid the pandemic. These are the kind of events that remind you just how small a city like Toronto really is. Celebrating a book—an anthology, no less—that weaves perspectives from Black artists, Black organizers, Black parents, Black educators, and Black thinkers was bound to have forged new connections by simply bringing people together under one roof.

That Sunday afternoon in February, Lula Lounge welcomed a number of Black people and allies who came together to hear more about Until We Are Free: Reflections on Black Lives Matter in Canada edited by Rodney Diverlus, Sandy Hudson, and Syrus Marcus Ware.

Until We Are Free is meant to be a book through which Black Canada can write itself, wherein contributors share a balance of personal experiences living across Turtle Island, their own reflections being involved with movements for Black life, and the value of understanding Black liberation as inherently connected to Indigenous sovereignty.

After hearing from most anthology contributors, Pascale Diverlus, co-founder and former member of Black Lives Matter – Toronto (BLM-TO), wrapped up the launch with an announcement of yet another project borne out of the group—the creation of Wildseed: Centre for Art and Activism. Embodying its namesake, a novel by Afrofuturist author, Octavia Butler, Wildseed is a multipurpose community hub conceptualized through reflections on Black histories and hopes for radical Black futures.

It’s eerie to think about how much the book and hub launch once felt like the end of an era. Since 2014, Black people and our allies had been on the ground and behind computer screens, disrupting “business as usual” to demand justice for Black people who are disproportionately killed by police. Through six years of public education and activism, it seemed as though public opinion on anti-Black racism had shifted. For a brief instance, it felt like we had entered a moment in which Black people could catch our breath. In a paper for the Yellowhead Institute called “To Breathe Together: Co-conspirators for Decolonial Futures,” PhD candidate Sefanit Habtom and doctoral graduate Megan Scribe describe it as a moment in which we “conspire to breathe life into something new.” Even as we entered a pandemic in which “communal space” was given entirely new meaning, material like Until We Are Free and spaces like Wildseed gave me hope that Black people could use the brief plateau as an opportunity to reflect upon and learn from what had been a global movement. Wildseed and other cultural sites created by Black people across the diaspora remind us that we can leverage our resources to create more livable futures.

The timeline between the launches in early February and early March 2020, and May 2020 when everything changed yet again, made me think of what possibilities open up when we think critically about time. On one hand, the mere concept of time has become much less linear amid COVID-19, during which every waking day feels like an eternity, while months seem to pass with the blink of an eye. On the other hand, revolutionary ideas are made possible when we shift the terrain and think differently about seemingly catastrophic moments—we may as well work with, rather than against, those blurred timelines to imagine our worlds anew.

Bedour Alagraa, assistant professor of Africa and African Diaspora Studies, University of Texas at Austin, shared her thoughts on texts by Walter Rodney, Frantz Fanon, and Eduardo Mondlane to make sense of those critical shifts. During a talk in late 2019, she asked questions like: what happens when we begin understanding labour as cultural practice? Or when we think of struggle as being borne out of cultural expression, rather than the other way around? As a Black woman who uses artistic curation and activism as mechanisms to support, co-create, and engage with spaces rooted in community care, I can see how this era marks a break in which each of us can play a role in creating more breathable futures.

As anxiety-inducing as it had been to work through the uncertainty that went along with the first few months of COVID-19, it was also a pretty introspective blip in time until the week of May 25, 2020. In the wake of George Floyd, Regis Korchinski-Paquet, Tony McDade, and other Black people killed by police on Turtle Island and beyond, it began feeling like we were living in a time loop of Black death. Not only because it felt like just yesterday that some writers, theorizers, and other creators began speaking about the contemporary moment as a post-BLM era. In a much broader sense, it felt like a time loop because Black people have been sounding the alarm about structural violence in Canada, the U.S., and around the world for more than 400 years.

I submitted my master’s thesis during the pandemic, a project that wove together a review of literature and mixed media alongside my own analysis on a convening of Black artists, Black organizers, and Black people who were neither artists nor organizers. Through my research, I gained a better understanding of how radical creative practice—sit-ins, cookouts, protests, festivals, bookstores, newspapers, and after-school programs alike—help to chart a more livable city.

Among the number of new ideas that came out of our conversations, participants who were Black artists shared their experiences entering activist spaces. One participant in particular mentioned that she is limited to predetermined contributions when she is brought into organizing spaces. As a visual artist, she revealed that she is never asked to contribute intellectual work: “I don’t feel like I’m asked to come in to think of how to live a better life with everyone.”

It’s so disappointing to be reminded how often the work of Black artists is devalued. Particularly because it goes against everything Until We Are Free, the creation of Wildseed, and what Black studies scholars like Bedour Alagraa teach us about culture—Black creative practice is as essential as it is expansive.

I had the chance to speak with Toronto-based multidisciplinary artist Anique Jordan about some of the tensions between artistry and activism. When I told her what the participant had shared with me during a focus group meeting, Jordan explained that she resonated with that experience as well. Jordan shared that work by Black artists is often critiqued in extremes where it is read as either missing political commentary or offering too much. Contrary to either extremity, Jordan interprets Black artists as intellectual labourers. “Our work can be leveraged to create new meaning,” she said. “As artists, we’re constantly fine-tuning those skills…. We’re taking risks and offering real sound ideas toward change.”

When I asked what motivated her own creative practice, she went on to share how much she is inspired by the people who she grew up around in Scarborough. Community workers, youth, and block party organizers who wouldn’t necessarily consider themselves artists are some among many to whom Jordan’s work is indebted. I completely echo her sentiments: even though I moved away from the area some time ago, most of my own curatorial and scholarly work is inspired by Scarborough. The East Side is where I first learned the meaning of community.

Black cultural workers and everyday Black people are the primary audience of Jordan’s newest project—a mural that has been installed in front of NIA Centre for the Arts. “It’s affirming. It’s a reminder. We have done enough, and here are all the things we’ve done.”

Now more than ever, Black artists are moving away from work that centres pleading our humanity to general audiences. Just this past summer, activists and artists came together to paint “Defund the Police” outside of Toronto police headquarters and Hamilton City Hall. What I found most distinct about these two actions was that each volunteer surrounding the disruption faced inward while the streets were being painted. Rather than raising awareness by speaking with people who passed by, the organizers seemed to be most focused on ensuring the painters remained energized and that they were kept safe. Similarly, after an online petition to remove a Sir John A. Macdonald statue was met with inaction by Montreal Mayor Valérie Plante, activists circled the statue and pulled it down themselves during a protest to defund the police.

Jordan’s new mural project and the crowd structure for Toronto, Hamilton, and Montreal’s “Defund the Police” actions remind me of the beauty that comes out of inward-facing imaginative practice. In an article on liberation for Canadian Art, Denise Ferreira da Silva, artist and academic at the University of British Columbia’s Social Justice Institute, writes that “creative work returns to the person and to those who knew and love them.” While contending with violence, Black creative practice offers a place through which humanity is re-centred. Da Silva also reminds us just how expansive Black liberation work can be.

I think a lot about Saidiya Hartman’s writing and the attention she pays to sharing stories about Black women who are most often misremembered. Through its own form of literary creative practice, Wayward Lives, Beautiful Experiments: Intimate Histories of Social Upheaval speaks of “the chorus” as a vehicle that helps us meaningfully imagine otherwise. “Inside the circle it is clear that every song is really the same song, but crooned in infinite variety, every story altered and unchanging: How can I live? I want to be free. Hold on.”

When it comes to creating futures in which we all live more freely, everyday people and Black artists play just as important a part as activists on the front line. Ultimately, magic happens when we simply bring people together within a creative space—whether within an anthology, at a venue, at a block party or within our own neighbourhoods.

Jessica P. Kirk is a cultural curator, researcher, and writer based in Toronto. She holds an MA in Social Justice Education from the Ontario Institute for Studies in Education, where she recently submitted her thesis entitled Mapping Livable Geographies: Black Radical Praxis within and beyond Toronto.