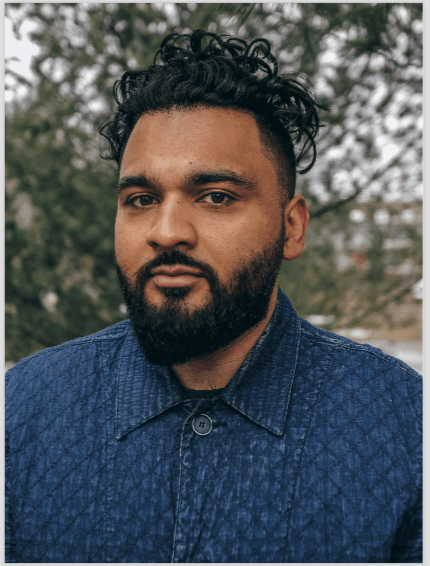 When Omar, a cook working for cash-in-hand at a Toronto restaurant, learns about the suicide of his ex-girlfriend Anna, he becomes caught in his grief and rage and is unwilling to accept what he’s been told: she didn’t leave him a note. He finds some respite from his woes when he meets an attractive and welcoming young woman named Kali. However, his obsession with finding closure continues to grow and, after an encounter with local police, Omar’s choices begin to ripple through all parts of his life, and into the lives of others.

Toronto-based author Adnan Khan began his writing career with thoughtful essays (for which he was awarded the RBC Taylor Emerging Writer Award in 2016) full of careful observations on the lived experiences of people of colour, both globally and in Canada. Khan follows suit with his first venture into fiction, There Has to Be a Knife, released by Arsenal Pulp Press in October. The novel probes into struggles with life, loss, and the systemic frustrations of being a young Muslim man.

Khan doesn’t hold back when it comes to the intensity of his protagonist’s narrative. It is unabashedly sensory and stark. Khan conveys Omar’s markedly youthful life, lived distinctly, through texting vernacular, flurried Reddit posts, and descriptions of the throes of physical gratifications. Omar, meanwhile, tamps down his emotions, which risk overflowing in every interaction.

“What I wanted to do was sit directly on that intersection of [toxic masculinity and misogyny]—that fear of racialized men, mixed with an exploration of empathy,” says Khan about writing a novel in the current, racially charged climate.
“I wanted to see what it looks like to live on that intersection, how that plays out, what that means for the people involved. The challenge was inhabiting Omar’s headspace for so many years while trying to balance the formal questions of the book.”

As Omar navigates through his own personal torments along the streets of downtown Toronto and North York, he is both self-aware and self-destructive. Intelligent and careless. Omar’s anger is palpable, yet his yearning for true and deep affection is ever-present beneath a toughened façade. Omar is apologetic and defiant all at once—to his city, to the people in his life, to the girl he lost, and to himself. When Omar gets into a violent altercation with one of the other kitchen staff at his job, Omar’s thoughts give depth to his fury: “Sorry, my body is out of my control, a ghost has taken over forever. More than I want to say sorry, though, I’m pleased with my disruption to the world, that I could still have an impact on another person, and that my slap proved that the world existed outside my brain.”

Khan cites several notable international writers as inspiring his use of both complex themes and authentic voices to create compelling characters. Khan also lists Canadian authors as his literary precursors.

“I’m happy to follow the path of the Canadian writers exploring this terrain and carving out a path before me: Dany Laferrière, Wajdi Mouawad, Pasha Malla, Dionne Brand, Lee Maracle, Rawi Hage, Djanet Sears—writers and artists of colour who have always been doing work, mentoring younger writers, and adding to the aesthetic and intellectual rigorousness of this tradition.”

“I want what I think all artists want,” Khan says about considering an audience that may not personally identify with Omar’s background and experiences, “readers who approach with a desire to explore, a keen curiosity, and an open mind.”