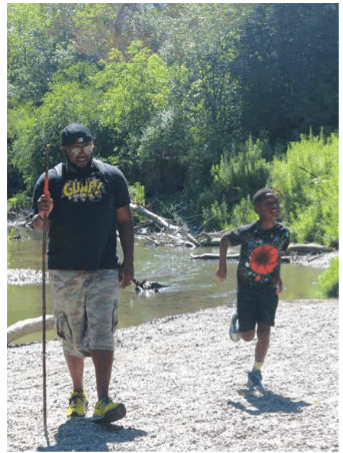 I can’t count how many of my childhood Saturdays included a trip to the barbershop, so my brother could get a haircut. Each trip included a long wait and a whole lot of people locked in Patois-filled debate. So I get why Brandon Hay chose barbershops early on as a venue for the organization he founded, Black Daddies Club. They’re a natural place for Black fathers to wind up with their kids, and animated dialogue is a given.

Hay, a father of three boys, started the club in 2007 to give Black men and fathers an intimate place to share conversations and support. Initially he debated calling it just, “Daddies Club” but he worried the unique challenges Black fathers faced could be washed over.

“I wanted to be able to talk about issues specifically within the Black community. Specifically, that Black men can relate to.”

Hay’s own father was murdered, and he has family members who have been incarcerated, so he knows firsthand he systemic ways Black fathers are pulled from their children’s lives in disproportionate numbers.

When he became a father himself, he thought, “I’m just going to do everything my father didn’t do,” but he quickly realized remodelling fatherhood was hard without examples. Craving community and support as a new dad, he went to a resource centre in Scarborough to get information about their parents’ clubs. “I remember the secretary looked at me confused and saying, ‘We have programs for moms, grandparents and guardians, but nothing for fathers, not to mention Black fathers,’” he recalls. To Hay it sent a clear message that his role as a Black father was not an important one.

Another obstacle Hay saw Black dads facing was the idea that fathers must provide financially for their kids and if for whatever reason they can’t, they’ve failed already. He wanted his peers to realize that nothing beats being present. (For me, one of the most memorable moments I had with my own father was when he took my brother and me on a walking tour around Kingston, Jamaica. And it cost nothing.) To keep the focus on together time and to eliminate financial barriers, the Black Daddies Club organizes group outings for dads and their kids. In the summertime they do hikes, and they’ve also partnered with organizations like Kids Up Front Toronto to get free tickets for cultural and sporting events.

Not only does this allow Black dads to take their kids to museums and NBA games, it’s also a way to claim space en masse, in settings where Black people can feel out of place, like the Art Gallery of Ontario. “It’s this beautiful sight when you see a sea of Black men with their kids taking over the exhibit,” Hay says.

Love is shown and memories are created in intentional moments like this, and that is what makes all the difference in a parent’s relationship with their kids.

“We’re surrounded by anti-Black racism and systemic oppression, so it’s easy for internalized hate to happen,” says Hay. “I think that as Black folks we have to be super intentional about love— loving ourselves and loving others.”