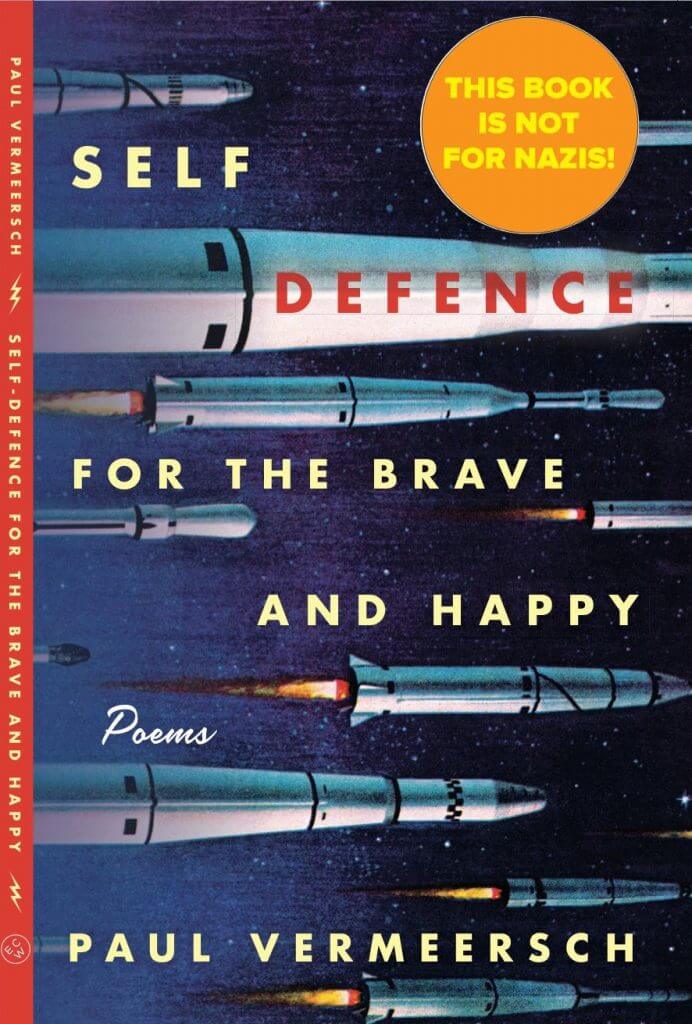 The great French novelist Andre Malraux once declared that “the 21st century will be spiritual or will not be,” a sentiment undoubtedly shared by many who lived under the shadow of the Cold War’s mushroom clouds.

Paul Vermeersch’s beautiful new book of poems, Self Defence for the Brave and Happy posits that the 21st century will be through acts of imagination, dreams and daydreams, creativity, and even dissociation. When you can’t trust anything, the poems argue, your imagination becomes the only valid interpreter of reality. To wit, in the poem “Don’t Wait for the Woodsman,” Vermeersch warns, “Only stories want us to live. The wolf will lie in wait/ to devour us. Do not blame it for doing what wolves do.” And in the titular poem, we are advised “Tell yourself that you are beautiful. Listen only/ to songs that insist it.”

Part inspirational tract (borne of a deliciously playful inspiration, not the usual kind), part prophetic revelation, and all crafted with Vermeersch’s signature elan, Self Defence for the Brave and Happy is a generous chocolate box stuffed with bon(-bon) mots, the perfect gift for your inner visionary. Shine on, you crazy zircon.

This editor-at-large RM Vaughan sat down with Vermeersch to talk about the new book.

RM Vaughan: The book moves effortlessly between prophetic pronouncements and intimate, personal observations. Is it a goal of the book to conflate the two in order to make the reader more keenly aware that we live in prophetic times?

Paul Vermeersch: I think all times are equally prophetic and intimate. The lives of individuals unfold along with the cosmos. But the prophets only seem to get at half the picture, only the grand events. Perhaps one of the jobs of a poet is to be a prophet of the small things, too—to prophesy the taste of lobster, the pang of guilt, the fear of darkness. We can’t put small things on hold when big things happen. I think my poems encompass that spectrum: both the landscape and the figure within the landscape, both the star system and the escape pod within the star system.

RMV: The world has not seemed as dangerous as it does now in generations. But at the same time we have never been able to share our thoughts, worries, and joys more easily. It occurs to me that your book attempts to sort out, or at least guide the reader through, this very strange era.

PV: I agree that the world seems dangerous now. I don’t know that it feels more dangerous today than it did in World War II, for example, with the Holocaust unfolding and the atom bomb about to drop on Hiroshima; but it feels like a different kind of dangerous. A hundred years ago, the world was on the brink of slipping into the Great Depression. Today, I think we’re beginning to experience something I call the Great Regression: a time characterized by fear and greed, a time when fascism is resurgent and the institutions of democracy are under constant attack by demagogues, when misinformation is widely disseminated to drown out the truth and to sew discord, when the impulse to compassion is met with derision and the impulse to acceptance is met with bigotry, and amid all this chaos the kelptocratic class is raiding the world economy to fill its coffers. The Great Regression might be the precursor to a neo-feudal dark age ruled by narcissistic robber-baron billionaires. The effort to bring this about is already well underway. And all this is in addition to the mounting environmental catastrophe. If the world seems dangerous today, it’s because we’ve already seen how all this will end.

RMV: That leads to the next question. You employ classic sci-fi imagery and tropes in the book, but there is no Asimov-like remove on your part, no impartiality—which I love. How have the observational and speculative traditions of sci-fi influenced and/or been discarded in this book?

PV: It’s 2018. Asimov imagined our time, but we are living it. There is no remove because we are already the ghosts haunting someone else’s future. Our era is the dystopian failure of a once hopeful prophecy. We were supposed to inherit Walt Disney’s Tomorrowland or Gene Roddenberry’s post-capitalist utopia. Instead we have a world prophesied by J. G. Ballard and Philip K. Dick. How else can we discuss this? Science fiction has given us the vocabulary to talk about our present era because it has always been about our present era.

RMV: “The future will be old and used. It will leak” is my favourite line. I shouted “Testify!” when I read it. Because, pardon my gloom, but it does feel like we have used up the future. Simone Signoret wrote, “Nostalgia isn’t what it used to be.” Can the same be said of the future?

PV: The used future is an important concept in science fiction. In a lot of science fiction, everything is new and shiny. The idea of the used future is why George Lucas imagined the Millennium Falcon to be a grimy, run-down hunk of junk. Even in the future, there will be old things, broken things. It’s Percy Shelley’s Ozymandias in reverse, the prophecy of future ruins. I wanted to work with that idea for precisely the same reason people want to renovate their kitchen or buy a new car: because we didn’t inherit Walt Disney’s Tomorrowland, because we’re in a race against time, and we’re desperately trying to save whatever shiny parts of the future we possibly can.

RMV: The section titled “Nu Rhymes for Nuclear Children” is a selection of nursery rhymes imagined from a post-nuclear war childhood. They are blunt and scary, and almost read like placards or protest songs.

PV: I started writing these nursery rhymes in 1995, and they never really fit in with anything I wrote until now. I think they were waiting for this book. They’re all about 20th-century tragedies like the Kennedy assassination or the election of Ronald Reagan. I wanted to update the concept of traditional nursery rhymes that were about horrible things like tyrants and plagues. When the rhymes were redacted with thick black lines to hide parts of the text, they were finally ready for the 21st century.

RMV: The poem “The Prophets Want to Know if They Were Close” is, for me, the cornerstone of the book. We all want to know the future, but it is arguable that only prophets want to actually live in that future. In an era when everything can, and often does, shift overnight, in a heartbeat, what is the role of the prophet? Can prophecy even operate in such times?

PV: The job of the runner is to run toward the finish line, but what is the runner’s job when she reaches the finish line? Just so, the job of the prophet is to tell the future, but what is the prophet’s job now that we are in the future? I imagine the prophets lying on the ground, exhausted, wrapped in thermal blankets. The blankets are cocoons—the prophets must metamorphose into something else. When they emerge, they will have become poets. Then, instead of predicting the future, we can create it.

RMV: The book is being positioned as both a warning and a tonic, as something marking where we are and at the same time offering a helping hand. And there is a lot of joyful noise in this book! How do you keep your own spirits up?

PV: When my last book came out, one reviewer called me “the prophetic, post-apocalyptic poet,” and as flattering as that might be, I have no desire to be a prophet of doom. The 24-hour news cycle has perfected that job, and I can’t compete with it. It was a conscious decision to inject a bit of hope into this book, not only as a tonic—an antidote to the 24-hour news cycle—but also as an admonishment. Our imaginations are the key to a new future. We can’t create a better world unless we first imagine it. I wanted that idea to come through. I wonder, are we now living in a dystopian world because we’ve spent the last half-century imagining one? Has it all been a self-fulfilling prophecy? What if we return to Tomorrowland, to Gene Roddenberry’s undiscovered country? What if we spend the next half-century imagining a better society, a better world? What prophecy will we fulfill then?

Meet and hear Paul Vermeersch at the following: