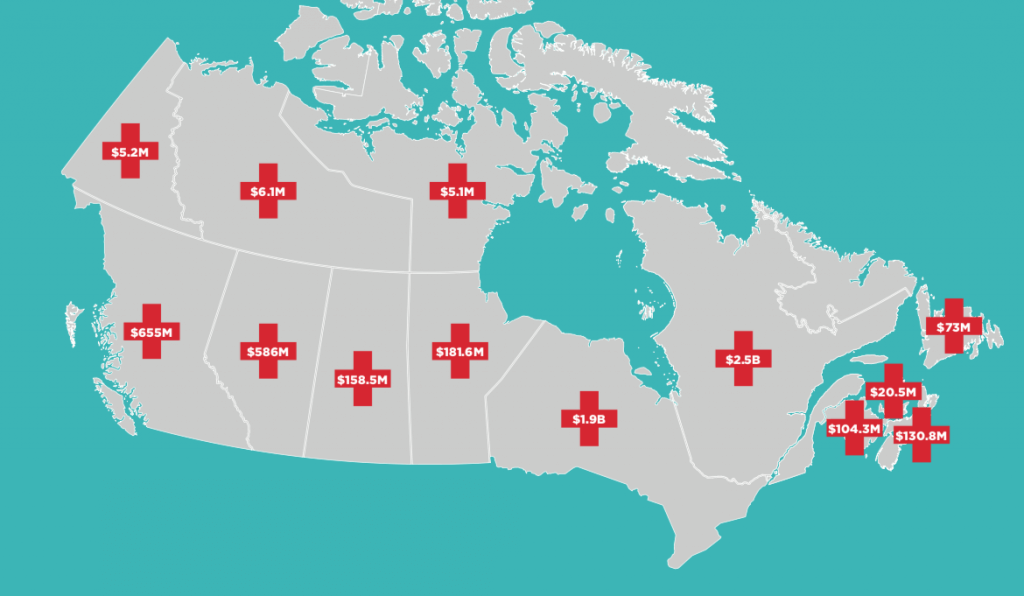 For the first time in the history of Canadian mental health, in 2017, the federal government announced an investment of $5 billion to improve access to nationwide services. The lump sum, which is part of the government’s Health Accord with the provinces and territories, is slated to roll out over the next 10 years. Mental health advocates, care workers, and organizations acknowledge that the investment is a welcome first step in tackling Canada’s growing mental health spending.

But the funding is a “mere drop in the bucket to address all the lack of resources and capacity,” says Chris Summerville, co-chair of the Canadian Alliance on Mental Illness and Mental Health. In 2015, Canada’s mental health spending was 7.2 percent of the total health spending budget. To raise mental health spending to the nine percent minimum recommended by the Mental Health Commission of Canada in 2012, “the federal government would have to release nearly $778 million annually, to reach all of the provinces and territories,” says Summerville—well above the pledged $5 billion.

Just over a year after the investment was announced, we break down how much each province is receiving over 10 years.

Facing an opioid crisis that claimed 343 lives in 2016 alone, Alberta’s Minister of Health Sarah Hoffman received a 3.5 percent funding boost from the federal government, in response to her 5.2 percent ask. In 2018, the province’s budget allocated its own $7 million to improve mental health services. Recently, the province also promised a $5 million grant to hire staff and build school-based programs, extending mental health support to 100,000 students across the province.

At first, Manitoba Premier Brian Pallister held out on signing the federal Health Accord, demanding more money for Indigenous health care and rising rates of kidney disease and diabetes. In August 2017, the province signed the health pact and received an additional $5 million for 2017-18 in health care funding to fight kidney failures. Currently, “mental health spending in Manitoba is approximately 4 percent of its health spending budget. Even though the funding announcements have been made, those funds will not bring mental health into parity with physical health,” says Summerville.

Every year, over 500,000 Québécois aged 12-24 and 430,000 aged 25-64 are diagnosed with depression and anxiety. Up to 50 percent of long-term absenteeism in the province is attributed to mental disorders. The Québec Health and Welfare Commissioner estimates the yearly cost of psychotherapy in the province to $400 million. In 2017, Quebec announced an investment of $35 million in mental health which will support their first public psychotherapy program.

In 2015, Moncton reported 22 suicides. In 2016, that number grew to 40. Suicide rates in northern New Brunswick are even higher, and youth hospitalization in the province is almost twice the national average. Wait times for those in crisis range from six months to a year at mental health facilities in Moncton. Most mental health professionals operate private practices not are not covered under the province’s health plan. But recently, the Medavie Health Foundation donated $360,000 to support mental health research and evaluation.

In 2014-15 Newfoundland and Labrador reported an average of 13.5 percent of citizens who experienced repeat hospital stays due to mental illness, in comparison to a national average of 11.5 percent, according to the Canadian Institute for Health Information. Fatal police shootings in the province are rare, but two out of three that have occurred since 2000 involved people living with mental illness. The province is hoping to tackle this $1.7 million allocated in its 2018 budget toward mobile intervention units. And $6.1 million has been reserved to replace Waterford Hospital, the province’s century-old mental health facility.

In 2017 health services audit, Nova Scotia reported an expenditure of $225 million on mental health services per year. The report by Nova Scotia’s Auditor General, Michael Pickup, found that the government lacks a specific plan on how it intends to deliver mental health services to those who need it the most, delivery is inconsistent based on location, wait times and assessment methods vary, and there are ongoing concerns around patient and staff safety. The province’s 2018-2019 budget has allocated $3.9 million for mental health and youth supports.

In 2015, Prince Edward Island reported a suicide rate of about eight people for every 100,000. The province’s 2018 budget allocated funding for student wellbeing teams, a 24/7 mental health response team, a $175,000 grant to CMHA for island-wide support groups, and more.

In 2015, the Northwest Territories reported a high suicide rate of 24.7 per 100,000. The 2018-19 budget allocated targeted mental health funding of $1.5 million for education and training of child and youth mental health counsellors, and $500,000 for on-going funding for the youth-in-crisis mental health programs and existing community care for Indigenous peoples.

In 2016, Nunavut’s suicide rate of about 86 people for every 100,000 was the highest recorded in the country. The provincial government, Nunavut Tunngavik, the Embrace Life Council, and the RCMP have embarked upon a five-year action plan, Inuusivut Anninaqtuq, by investing $16 million to bring wellness programs within reach of all Nunavut communities.

In its 2018 budget, the federal government committed a separate $200 million over five years for the delivery of culturally appropriate addictions treatment and preventions services in First Nations communities, and $248.6 million over three years for mental health and emotional supports for residential school survivors and their families. But according to Yipeng Ge, Vice President of Government Affairs at the Canadian Federation of Medical Students (CFMS), there’s still a need for more accountability and transparency in tracking the distribution of the funding to the communities that need it the most. Budget reports don’t get conveyed to those working on the ground, Ge said. CFMS has called on the government to adopt the frameworks and strategies recommended by Indigenous peoples to address First Nations and Inuit suicide, comprehensively review current distribution of funding through the National Aboriginal Youth Suicide Prevention Strategy, and more.