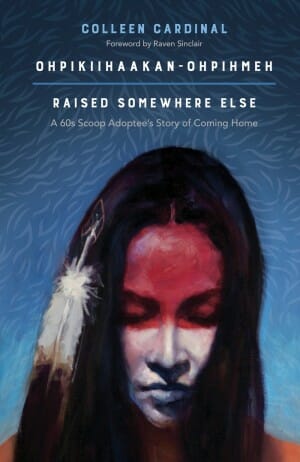 In this excerpt, Colleen Cardinal tells her story of being a child of the Sixties Scoop when she and 20,000 Indigenous children in Canada were taken from their homes to be placed in foster care or were adopted.

There was a huge disparity between how us girls and our adoptive brother were treated. As a child I could not speak out or even identify that my sisters and I were treated differently than our adoptive brother. It’s a hurtful feeling to know you are not valued as much as your light-skinned brother, I thought he must have been pretty special. Scott never knew the sting on his ass after a harsh spanking, nor did he have to change his pants after pissing himself from fear. Scott never went to bed terrified, crying and lonely. Scott never knew the cold outhouse on a late school night or pissing in the rabbit shed because he was locked out of the house. Scott has always known comfort, convenience and the privilege of being born “white,” to “white” parents. A thin wall separated our rooms but a massive wall of privilege separated our experiences in that household.

I watched my parents support and encourage Scott to excel. He flourished while my sisters and I ran from Ronald’s abusive, wandering hands. My brother had a job, lived at home, had his own car and attended college. Was I jealous? No, I was deeply hurt that we were not valued in the same way and not afforded the same opportunities. Instead my sisters and I lived in fear of a father who molested us. I felt angry and helpless. I could not speak out against the atrocities that I witnessed for fear that I would hurt my mother or put her in danger. But it was a torn loyalty I had, and still have, for my mother because she never showed that she cared for me or loved me as a child or even as an adult.

Excerpted from Ohpikiihaakan-ohpimeh (Raised Somewhere Else) by Colleen Cardinal. Excerpted with permission from Roseway Publishing