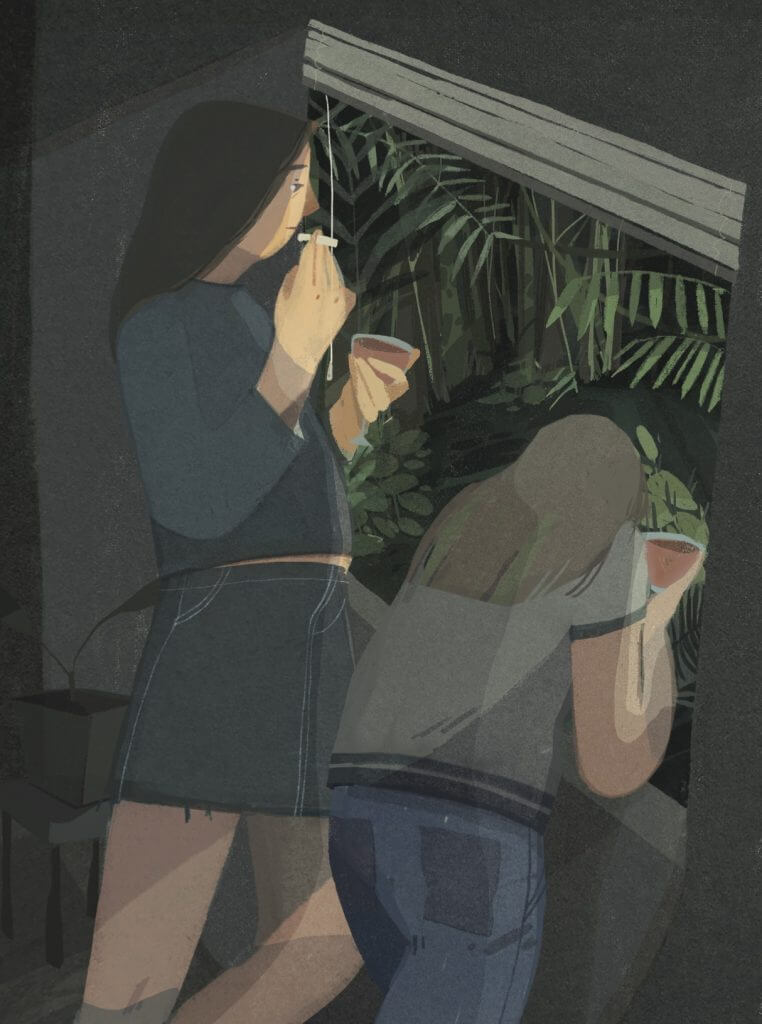 I was writing a quiz in organic chemistry when you texted me. It was the first time I ever missed a test. Technically, I didn’t miss it because there were five quizzes per term but only the four best counted toward the final mark. You thought it was funny that I was there when you arrived, looking crazed with worry and probably just crazy wearing all the scarves I wore at that time trying to look like Erykah Badu—on my head and tied to the hardware of my pleather bag and, of course, around my neck. The hospital was only five blocks from the lecture hall. It wasn’t such a feat. They were trying to abort you at Morgentaler when they realized it was an ectopic pregnancy and they rushed you to the emergency at Mount Sinai. You’d taken the morning-after pill months before, when you’d woken up naked at your boss’ house, but it didn’t take. We’d grown apart since you’d left school and I didn’t realize I was still your emergency person. I had to leave while they examined you because I kept asking the doctor questions like, is she going to be okay? Until you sighed and asked if I could go buy you a bottle of water, even though there was a glass and pitcher in the room already. I also bought you a used copy of Love in the Time of Cholera at the gift shop. They had a library-type cart sitting amidst all the flowers and stuffed animals and balloons and knick knacks, and it looked so out of place. I had to make my $2,000 from waitressing that summer last eight months, so it was all I could afford. The cover art was that Rousseau painting of a nude reclining on a sofa in the jungle and I remember thinking it might be too on the nose. A woman lost. But you were never as literal or as shy as I was. You loved it and you thanked me so graciously, it was shocking to me that you could be appreciative and smile. You were more than three months along and the doctors said you were lucky your tube hadn’t ruptured. Lucky is a word doctors should stop using, you said, it sounds callous.

The day you told me you were pregnant and getting an abortion you’d invited me over for dinner and when I arrived you said, let’s go to the grocery store. We baked the frozen vegetarian lasagna that had called to us because we had a nostalgia for the sliced carrots inside that looked corrugated like cardboard, so bright against the white cheese sauce. You scoffed when I picked up the one that served four to six people and chose instead the one that served eight to twelve. We smoked a joint and ate the whole thing. We drank red wine that came in a jug. Your apartment smelled like cats and garbage but not too strongly. The kitchen table and counters were cluttered with takeout containers and mail but otherwise the house was tidy if not clean. You smelled of hand sanitizer and mint tea, same as always. I was waiting to be able to see how you’d been changed by everything that had happened, but you were the same only a bit swollen and eager to charm, probably trying to make me feel at ease. Your new apartment was less dark and slanted than the old one and it was owned by a nice Portuguese lady with a kid, which was better than the last place on Dundas above the laundromat with the landlord who cut holes in your panties when they were in the dryer. Also you only had one roommate, but she was addicted to multiplayer video games, so I didn’t meet her that night. I only peeked into her room on my way to the bathroom. I remember being disappointed it was just a bed and a dresser and her hunched over a desk, the computer screen lighting the room in a soft glow. In your room there was your normal mountain of laundry piled next to the hamper but sparklier than it had been when we were teenagers and you only wore black. On your unmade bed was an open duffel, black and silver and gold lycra was twined together in a knot of bikini strings and a thigh high black patent leather boot sticking out like a flaccid dick from a pair of boxers—I mean, I felt indecent looking at it. While I peed, I wondered if the love I had for you could still be felt when we hadn’t seen each other in so long. When I had no idea how you spent your time and my attempts to imagine it were too stupid or sinister to be real. I had said, of course, report him, call the cops on that bastard, but there was the matter of time passing, and having kissed him before, and his being in the Serbian Mafia. The last part made me feel I didn’t understand your life more than you dropping out, more than the older men you were always dating, more than the way your laughter had gone from a cackle to a sort of flat honk.

A job is not a fate, we learned that from our parents and our friends’ parents and the shit jobs they had—still, it’s not nothing. I didn’t want to pry about the club you worked at, but I wanted to know. My aunt had told me she used to sell beer there and it was not a nice place. Your candour was so seductive and precious to me I couldn’t bear to put you in the position of having to account for yourself to some absent third party, my stoner aunt, when the only people in the world who mattered were me and you. We clinked glasses and said things like, to not having some asshole’s baby. You were flippant but you were allowed to be because it was happening to you. This careless tone was a concomitant to tragedy. Our hometowns were both shitty in the same ways, so I recognized it. I experienced it as a tightness in my throat that endless glasses of wine would not loosen.

You had to tell the nurses how it happened when he called the hospital to say, what is going on why aren’t you coming to work, and also, I have a wife. When you told me you told the nurses, I imagined them convincing you with their sheer strength and vitality to report him. They simply instructed the switchboard operator not to forward any calls to your room.

You were there a week and I came every day. I met a big, brassy waitress from your job and her wrestler-looking boyfriend one day, she brought you chicken parmigiana from the Italian place on your block. There was an ease between the two of you we didn’t have anymore, an understanding of the circumstances. Where I was fretting, she looked at you like she knew exactly how well-equipped you were to ignore everything horrible that was happening. Her visit gave you an emotionally sated glow the whole night. After she left we watched a movie and you interrupted the film several times to repeat things she’d said during her visit that had made you laugh. I felt that her insight came from some essential female experience and in my dream this experience was represented as an antique bathtub in an abandoned mansion that this waitress invited me to lay in. It was a soaking tub with the faucet in the middle rather than at either end. When I got in I noticed I was naked. When I got in the ceramic was not ceramic at all but rubber as warm as human skin, when I lay back the ledge of the tub shrank to hold my shoulders exactly where I was, like a straitjacket, but furniture.

Madeleine Maillet is a writer and translator in Montreal whose work has appeared in the Journey Prize Stories 27 (McClelland & Stewart) and other places.