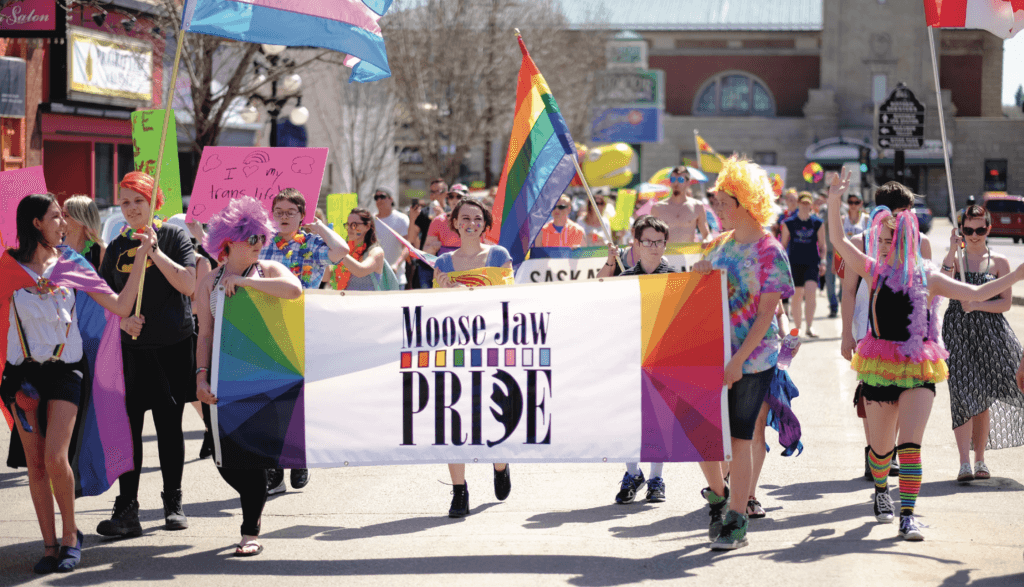 “Hey hey, ho ho, corporate Pride has got to go!”

The chants pierced the hot night air of June 24, 2013, accompanied by tambourines and drums—including a makeshift drum, made from a red frying pan with a wooden spoon for a drumstick. A crowd of protesters flooded downtown Toronto’s streets, beginning in the LGBTQ Village’s Barbara Hall Park, where the city’s AIDS memorial was erected years ago. Some linked hands and arms to protect others and guide cars safely by as the marchers passed.

Hours prior, Pride Toronto participated in an opening ceremony at the Toronto Stock Exchange (TSX). “It made me want to defile everywhere,” one attendee said to a roaming camera capturing the event. While marchers used some of the same chants heard during the official Pride Parade and its counterparts, the Dyke March and Trans March, this was in many ways the anti-Pride Toronto. It was the Night March.

Opening the TSX in 2013 was another drop in the bucket of economically focused relationships that Toronto Pride has fostered over the years, with its TD Bank music stages, Bud Light floats, and free Pfizer temporary tattoos. Organized independently of Pride Toronto, participants have been walking the Night March in protest of the corporatization of Toronto Pride since 2012. The Night March is a return to the grassroots activism of nearly 50 years ago that initiated the first Pride in the city. As one sign from the 2015 Night March read, “Stonewall was a riot,” referencing the protests of a New York gay club, the Stonewall Inn.

It’s why some in the LGBTQ community are pushing to reclaim their platform from corporations. After almost seven years of marching, perhaps their message is finally being heard. While Pride Toronto still lists 13 big-name sponsors on its website—including its “platinum sponsor” TD Bank—its corporate sponsorship revenue dropped to $1,506,804 last year, down from $2,269,180 in 2016. What would Pride look like without these big names and their money? The answer can be found by stepping outside of Canada’s urban centres, where rural communities and small towns take Pride into their own hands, and, often, their own wallets.

The town of Inuvik is located 200 kilometres north of the Arctic Circle, just east of the Mackenzie River before it dumps into the Beaufort Sea. It’s so far north that residents have to “look south to see the northern lights,” according to its tourism website. This year, the Genders and Sexualities Alliance (GSA) of East Three Secondary School is planning Inuvik’s first-ever Pride parade, and the school’s first Pride week.

Genders and Sexualities Alliances—student-run groups for LGBTQ youth to meet, find support, and discuss their experiences—have been integral to community education and organizing Pride events.

East Three Secondary’s southern neighbour, Mackenzie Mountain School in the remote town of Norman Wells, held its first Pride parade in 2015, organized by the school’s GSA, Rainbow United. With a population of just 778 people, Norman Wells wouldn’t otherwise have the community backing or funding for such an event.

The East Three Secondary School’s GSA hasn’t planned anything bigger than a bake sale, but the presence of a Pride event, however small it is, can make a world of difference in a place like Inuvik. As Sarah Kelly, a teacher who helped form Rainbow United, wrote in 2016: “The overall message of intrinsic activities like Pride Week and GSAs is to teach youth how to tolerate and love others who may be different from themselves and be true to who they are as individuals.”

North Bay is a small community on the shores of Lake Nipissing, with a population of 50,000. As the “Gateway to the North,” the city has been privy to some important parts of history—it was an essential route for the fur trade and attracted many missionaries in the late 19th century. Today, North Bay has 28 churches and a large French-Catholic community.

Though larger than Inuvik or Norman Wells, North Bay has few GSAs—in 2012, only two of its six high schools had an official group recognizing LGBTQ students. “It’s not a completely accepting community when it comes to the LGBT[Q] community,” says Jason Maclennan, head of media and sponsorship relations for the North Bay Pride Committee.

The city didn’t have an officially organized Pride until last year, after the president of the North Bay and District Labour Council, Henri Giroux, attended Toronto Pride and decided it was something he needed to bring back to the community. A team was assembled, and the North Bay Pride Committee was born. In planning the first Pride, there were hiccups: Many initial members decided to leave the committee for various reasons, including the underrepresentation of certain groups within the LGBTQ community. With just six weeks to organize the events, which included a march and a picnic, the group scrambled to secure funding, food and space donations, and the necessary permits. In the end, the North Bay and District Labour Council, made up of representatives of different unions including OPSEU and CUPE, covered the costs. Despite some negative reactions from the local community—such as asking why there weren’t “heterosexual straight Pride” events too—over 3,000 people participated in the march and attended the Unity for Pride Picnic. 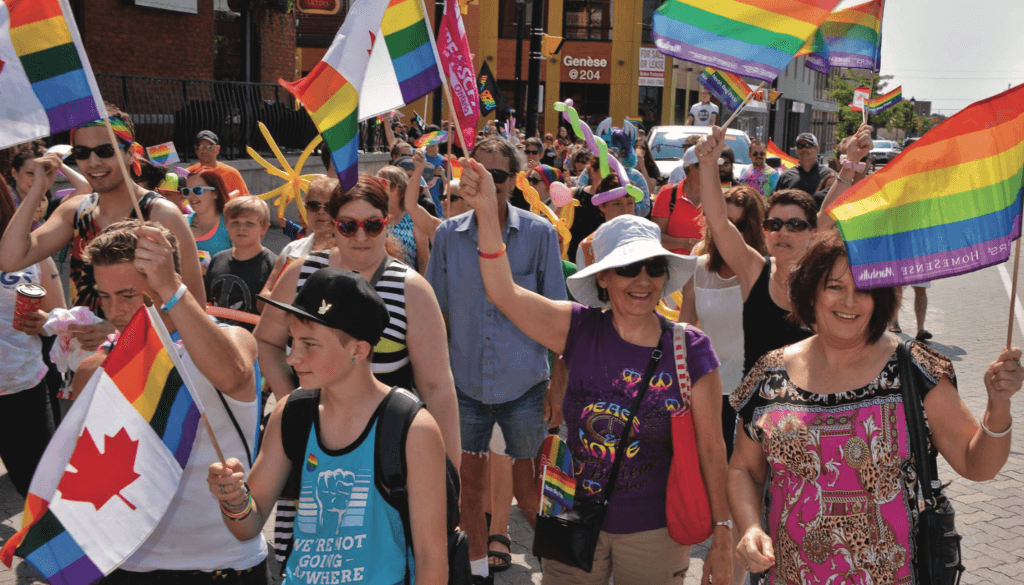 While North Bay Pride was generally considered a success, Maclennan says the committee didn’t have a chance to reach out to many companies for sponsorship. Though the District Labour Council is continuing its support, he hoped corporate sponsorship would make Pride 2018 larger and more accessible by allowing the committee to offer free events. But from a business perspective, a sizeable return on investment is key, which small-town Pride doesn’t deliver. “When you try to talk to the Pepsis and the Cokes and stuff like that, whether they’re just supplying bottled water for the event or something, they just don’t listen to you, they don’t have any interest,” Maclennan says. They instead focus on big cities: Toronto, Montreal, and Ottawa.”

Despite the struggle to secure funding, though, Maclennan emphasizes the importance of continuing Pride events in the community. North Bay still has progress to make when it comes to accepting its LGBTQ residents, which is partly why the city’s Pride is rooted more in activism than celebration. The committee consciously decided to call last year’s event a march, as opposed to a parade, and will do so again this summer. For Maclennan, it’s a chance to educate North Bay residents and promote acceptance and unity.

Joe Wickenhauser, the executive director of Moose Jaw Pride, agrees that education is an integral part of Pride. Last August, the Prairie South School Division, with the help of Moose Jaw Pride, developed a new course on gender and sexual diversity. Wickenhauser believes the course, which is now available as an elective for Grade 11 students in the division, is the first of its kind in Canada.

Though various Pride events have taken place intermittently in the city since 1993, Moose Jaw has only been hosting an officially recognized Pride Parade since 2016. With a population of just more than 30,000, it has been called the “Friendly City” by both visitors and residents—an appropriate nickname for a city whose Pride organization is built to help others create and maintain both LGBTQ-focused and -friendly events year-round.

Moose Jaw Pride as an organization is part of the Saskatchewan Pride Network, providing support for smaller surrounding communities, like Humboldt and Battleford, who want to organize their own events but don’t necessarily have the means or resources to do so. In 2016, it helped organize the first-ever Pride Week in the towns of Estevan and Weyburn, and assisted with the second-ever Pride flag raising on a Canadian Forces base.

Wickenhauser says the organization found support for these events through grants and local fundraising, in large part thanks to relationships built within the community. “A lot of the local businesses support the work that we’re doing because they believe in it,” he says. Being present throughout the year and in different mediums creates a familiarity between the organization and Moose Jaw residents, an invaluable relationship that has allowed Moose Jaw Pride and the Saskatchewan Pride Network to grow and thrive. The organization offers a variety of diversity training programs for local businesses and schools, and often sets up information booths at events in surrounding communities to increase their visibility and provide outreach to the LGBTQ residents there.

Despite the community support, however, the growth of the organization means it does need to look elsewhere for funding. Wickenhauser says it’s sometimes hard to strike a balance between LGBTQ advocacy and sponsorship needs. “I think as each Pride festival gets larger and larger, sometimes the appeal of larger sponsorships becomes harder to ignore,” he says.

Moose Jaw Pride, it seems, has found a neutral middle ground. Since the organization is involved in so many other events across the province as both an educator and supporter, Wickenhauser says it’s important to recognize each community and their differences and adapt the planning of events to meet each community’s needs. Some residents may be ready to have an activist-focused Pride event, but other communities respond better to a less overtly political, more celebratory approach. Especially in smaller towns where visibility is still a challenge for some, building ally relationships and ensuring the events are open to everyone provides protection for members of each LGBTQ community. While the anonymity of big-city Pride isn’t always an option for smaller towns, creating a space that is safer and welcoming to everyone allows some freedom in being known.

If Moose Jaw is the “Friendly City,” then Corner Brook, N.L., can be considered one of the most welcoming in Canada. While relatively young—it just celebrated its 60th anniversary in 2016—Corner Brook has become one of the more progressive cities in western Newfoundland.

This past October, the city celebrated Corner Brook Pride Week. Like many small-town Prides, Corner Brook’s is organized and funded by volunteers and local donations. Among its biggest supporters are students from Memorial University’s Grenfell Campus, who have provided flags to participants in the past. GSAs have also been integral to the education of the community. Corner Brook Regional High has organized two StandOut conferences, which invite students from schools across Newfoundland and Labrador to learn about creating inclusive environments for people of all genders and sexualities.

The city has also welcomed unique efforts to celebrate Pride. In the summer of 2014, Linda Chaisson was visiting her children in Vancouver. Walking downtown, she noticed a brightly coloured crosswalk, with painted stripes of pink, red, orange, yellow, green, blue, and indigo. “I want one of those,” she told her daughter. A city councillor in Corner Brook, Chaisson brought the proposal to a committee, then the rest of council upon her return to the city. It was swiftly approved, and Corner Brook became the first city in Newfoundland to have multi-coloured, rainbow crosswalks.

Positioned at two busy Corner Brook intersections—one directly in front of its city hall, and the other at the entrance of Grenfell Campus—Chaisson says the painted crosswalks are a means of incorporating LGBTQ symbolism into everyday life and promoting acceptance. A seemingly small gesture, it’s helped Corner Brook build a more inclusive community. In 2009, when the city held its first Pride, Chaisson says only about 25 people showed up. But this past October, over 200 people attended Corner Brook’s annual Pride Parade.

Whether symbolic, like painting a sidewalk, or tangible, like incorporating GSAs in school, these are examples of a “gentler approach,” as Wickenhauser put it, to bringing Pride into a smaller community. Recognizing that not everyone may be on the same level of understanding—whether due to a lack of exposure, education, or a mixture of both—Corner Brook seems to have found a good balance, and Chaisson hopes that it will only get bigger, better, and more inclusive as time passes.