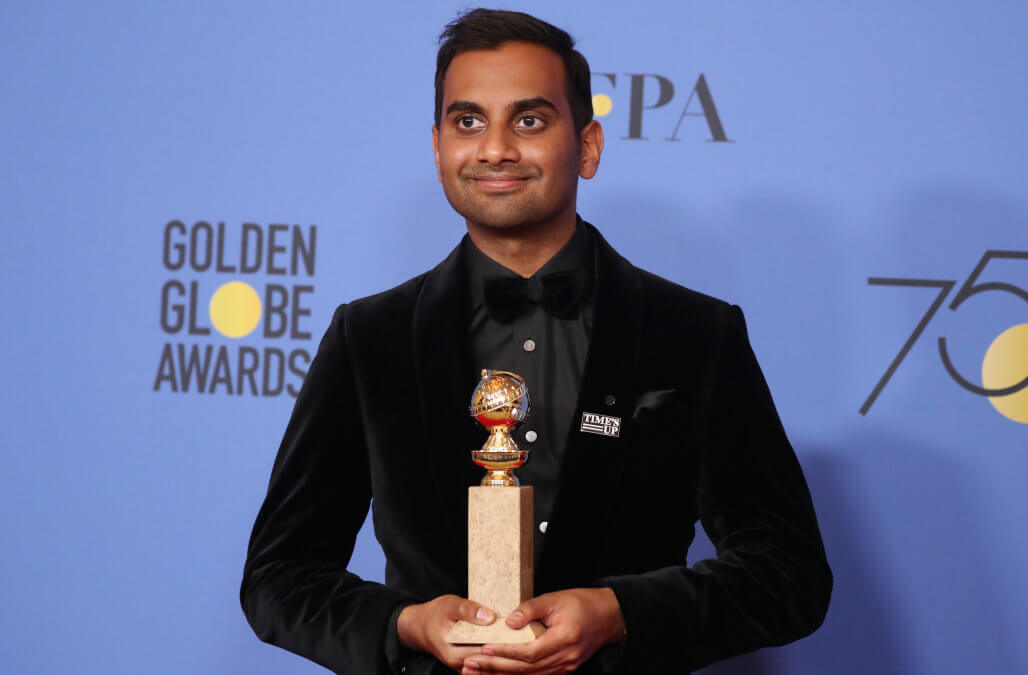 Aziz Ansari at the 2017 Golden Globes. Photo courtesy of Reuters.

On January 7, 2018, Aziz Ansari won a Golden Globe in a black suit adorned with a Time’s Up pin, a symbol of solidarity with women in the industry. Six days later, he was accused of sexual misconduct.

Ansari has spent his career displaying his understanding of nuances—of the dating world, of gender inequality, of racism. Through his acting, directing, and writing, he has shown that he gets the awkward moments and complications that come with living as a young person in the world.

His encounter with “Grace” was not one of those awkward moments. In a piece published in babe, Grace painstakingly details her date with Ansari, where, after bringing her to his apartment and ignoring her multiple verbal and nonverbal cues of discomfort, she left crying. It was not, as Bari Weiss put it in the New York Times, simply “bad sex.” Grace says it left her feeling violated, upset and awful. But it wasn’t illegal or inherently violent; in fact, it sounded more like an everyday, uncomfortable occurrence. However, what’s so insidious about this incident lies in how relatable it is.

For many women involved with men, the feeling of having one’s boundaries ignored is eerily familiar—the feeling that her body does not truly belong to her. It’s knowing that something is wrong, but also feeling like you’d be weak for saying so. Or because it’s not a big deal. Or because you don’t want to be rude. Or any of the multitude of reasons both men and women use to explain away the grey area between consent and coercion. They are not the same, but they have become linked—coercion leads to (reluctant) consent, because it’s romance. Because women should be chased. Because saying “no” makes it a game.

Or because, like Ansari, he’s a “nice guy.” He is known and applauded for his liberal values: he identifies as a feminist, he talks about racism and Refinery29 dubbed him a “Woke Bae” in 2016. The issue with rewarding men for having basic human decency is that it leads to seeing people in absolutes—he’s either a “woke activist” who can do no wrong, or an evil rapist. Public perceptions of sexual assault become limited to one scenario where a woman is violently attacked by an armed stranger—everything outside of that is invalid. And since Grace agreed to go on a date with him—since he’s a feminist and has a Netflix show and is an all-around cool guy—nothing that he did afterward could be wrong.

Instead of being praised for well-intentioned but ultimately performative gestures, men should be expected to re-examine their own behaviour and figure out how they contribute to a culture still so weighed against women. Anyone identifying as a feminist should be educating themselves on the way the movement and its causes are changing—such as the way feminists want to redefine consent.

“Culture changes very quickly, and we are all coming to understand heterosexuality in new ways than we had before,” says Judith Taylor, a women and gender studies associate professor at the University of Toronto. “[The babe piece] is an extraordinary game-changer that enters new possibilities into public discourse and public practice.

The piece sparked even more conversation—feminist author and speaker Jessica Valenti, whose tweets in response to the original babe piece were quoted in the Atlantic op-ed, called Flanagan’s piece “so bad and irresponsible” and “much more dogmatic and singular than the very nuanced conversation happening right now.” It’s a real-time look at the increasing disconnect between older women, who identify as feminists, and the new generation, who also identify as feminists. We are embracing the nuances—that, as writer David Klion put it, sexual misconduct cannot be solely defined legally if we want to change the overall culture around sexual consent.

“One of the marks of social change is that you see that newer generations see that they don’t have to put up with what other people of prior generations have,” says Taylor.

The argument was never about whether Ansari’s actions were criminal or unforgivable, but about why so many women can relate to Grace’s experience, and what should be changed about heterosexual encounters in the future. Perhaps the question now isn’t how a woman chooses to “get away” from an unrelenting man, but what makes that man feel so entitled to sex with her in the first place.