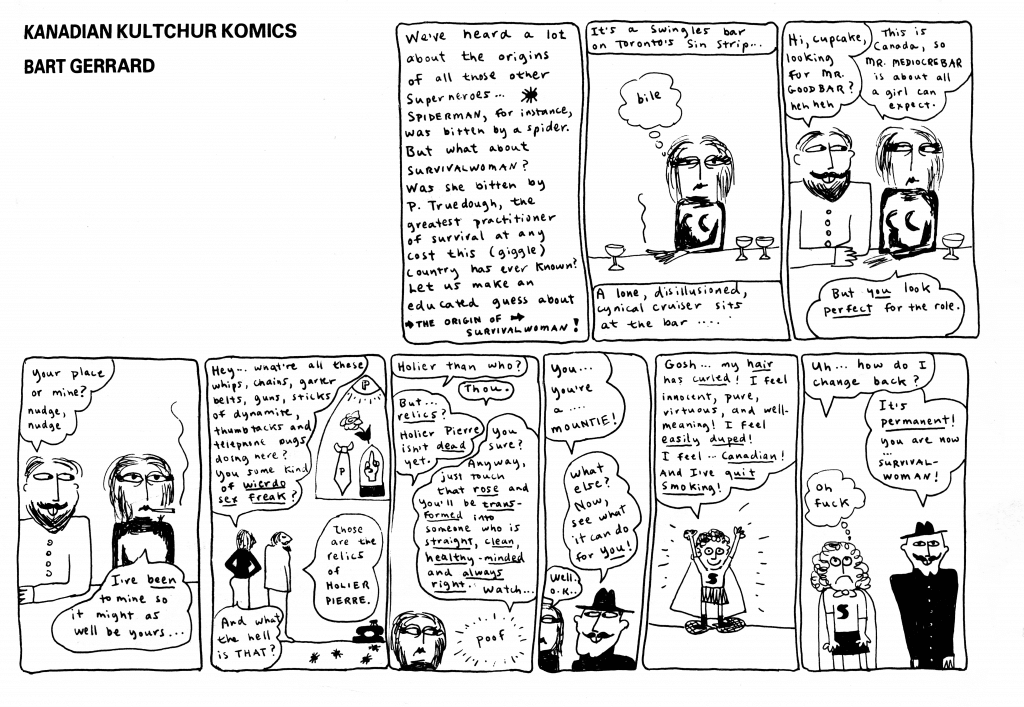 Yes, it’s a blast from the past! Or if not a blast, maybe a small firecracker?

But also the past of Canada, or Kanada, as we sometimes, then, in the seventies, found it clever to say. (Why did we find it clever? I’ve forgotten.) Bart Gerrard drew Kanadian Kulchur Komics for a small populist leftish periodical that had originally been called This Magazine Is About Schools, but had then become more general in its interests, re-naming itself as This Magazine. (“I write for This Magazine.” “What magazine?” “This Magazine.” “What?” “Who’s on First?”) (It is now called simply This, so no longer gets involved in this kind of circular conversation about its name.) Bart started drawing for it through Rick Salutin, an old friend, who thought the sometimes portentous and pulpit-thumping tone of This Magazine could use a little lightening up. Anyway, I’d always drawn stupid comix in private, so was not averse to doing it in public. As you can tell from the drawing, the strip was often cranked out on the fly: I was living on a working farm at the time and running a huge vegetable garden, so KKKomix sometimes had to take second place to slug-destroying and hay-harvesting, not to mention the TV script writing and other forms of scribbling I was doing to make a living and support my poetry-writing and novel-creation.

The central joke of the Survivalwoman comics was this: in 1972 I’d published a book called Survival: A Thematic Guide to Canadian Literature, which had made waves of a sort, not all of them friendly. This book was an attempt to distinguish what people wrote in Canada from what they wrote in the United States and the United Kingdom, in riposte to what we were so often told: that there wasn’t any Canadian literature, or if there was, it was a pale echo of things written in large, cosmopolitan, important places. Survival against the odds—both natural and human—I took to be one of the leitmotifs of such Canadian writing as I could get my hands on then, in the dark ages before the Internet, print-on-demand, and Abe Books.

Pair that leitmotif with the fact that, in the world of comix, Canada did not have a superhero of its own—Nelvana of the Northern Lights and Johnny Canuck and their bros and sisses having vanished with the demise of the wartime “Canadian Whites” in approximately 1946. (King of the Royal Mounted did not count, being American. Anyway, King had no superhuman features, unlike the present-day Wolverine.)

So what more appropriate than Survivalwoman: a superheroine with no discernable powers, who had a cape but could not fly—hey, it was Kanada, always lesser—and came equipped with snowshoes? The visual design was based on me—curly hair, short—as was part of the personality—earnest and somewhat clueless. This figure later did some fundraising for This Magazine, as a set of greeting cards, in which Survivalwoman sits on the curb looking dejected, as was her wont.

As Hope Nicholson has told me that she only understood about half of the references in the strip, here are some interpretations for you. In the Origin Story, Holier Pierre is Pierre Trudeau. We culture types were mad at him because he paid scant heed to us and our efforts: in that dimly remembered era, support for culture came from, guess who, the Progressive Conservatives! The middle finger is the same one Pierre had given some journalists. The rose relic is of course his buttonhole rose. The innocent, pure-minded Canadian was a cliché, and also a joke: we ourselves knew that this was not our real nature or indeed our real history.

The “Amphibianwoman” sequence is about a very high-profile concern in the 1970s: the Quebec separatist movement, then at its height. Why “Amphibian?” After the disrespectful slang applied to French people at the time, which was “frogs.” (I myself do not see why this should be derogatory, as I am an amphibian-fancier and my company is named O.W. Toad. But that is another matter.) Amphibianwoman is portrayed as sexier and more sophisticated than the naïve and flat-chested “anglo” Survivalwoman because we “anglo” gals were often treated to comparisons of that kind. (Why can’t Toronto women dress as well as Montreal women, and so forth and so on.) “René” is of course René Levesque, then the leader of the separatist forces. And as usual, the anglos (squareheads or wooden throats, in Quebecois slang) were told they just didn’t understand. They often didn’t, so fair enough eh?

In the Love Life strip, Survivalwoman has encounters with both Pierre (again), who (again) isn’t forking out for Culture, and Superham from the U.S., interested—as so often—in Canada’s natural resources. The final “Exit, pursued by a bear” animal panel is a reference to Marian Engel’s novel Bear, featuring a love affair of sorts with a bear, which had just rollicked upon the scene.

There you have it, young people of today. Don’t judge me. You will anyway, but wait forty years and see if anyone understands your political cartoons! Plus ça change, eh? Adieu, and bonne chance!

Excerpted from The Secret Loves of Geek Girls: Redux, published by Bedside Press. The book is now available at hopenicholson.com or on Amazon.