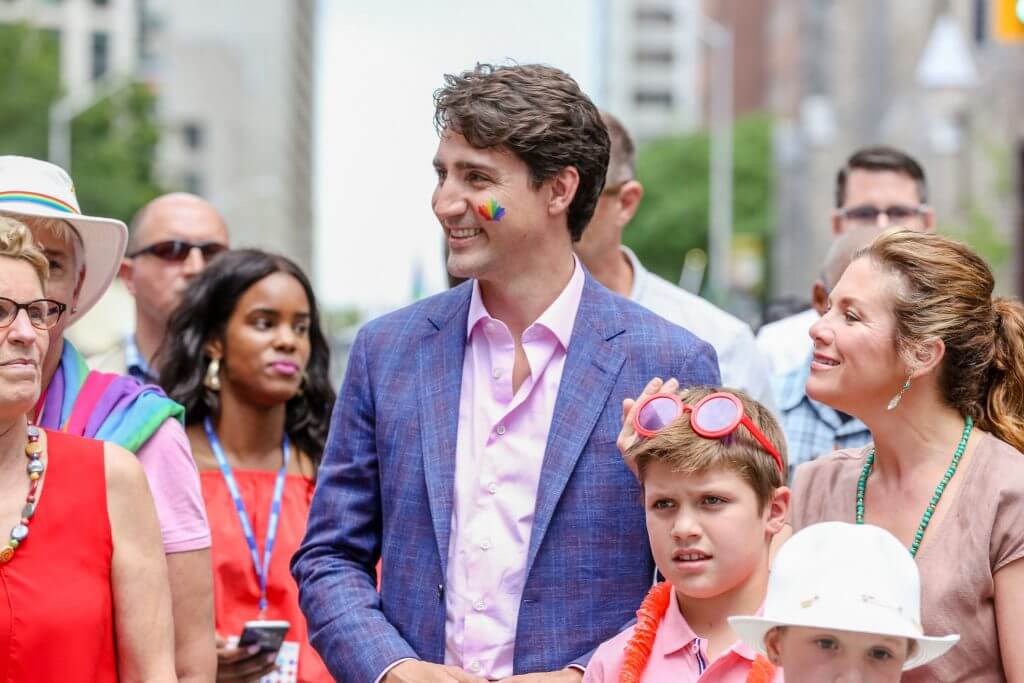 Three women stand in the main reception area of Mississauga, Ont.’s city hall, desperately looking over a crowd holding their phones above their heads. They share a giddiness that’s palpable, even contagious. All three are visible minorities—women of colour with black hair and brown skin. One of them wears a bright blue hijab. All three of them carry white pieces of paper, held as straight as possible as they lean above, beyond, and to the side of the crowd to get a glimpse at him. Just one glimpse.

“WE” reads one sign in the same blue as the woman’s hijab. “<3 U” reads the second paper in a pinky-red, the heart imperfectly coloured. “J.T.” reads the third in purple ink.

It’s the photo that captured how many minorities feel when Prime Minister Justin Trudeau enters a room. There’s swooning, elation, even relief. We have a leader that actively participates with, celebrates, and endorses the existence of minority communities and religion. He was the first sitting Canadian prime minister to attend a Pride parade. During Canada 150 festivities, he entered a First Nations teepee. He declared himself a feminist when he became PM. He was the first to wear socks that said “Eid Mubarak.”

But great photos, socks, and smiles cannot build a foundation for any minority group to survive and prosper on. As Trudeau’s second year in power comes to an eventful end, there have begun signs of trepidation, a hint of hesitancy, and a lot of skepticism.

A closer look at the context behind the photo-ops and colourful socks shows a bleak reality. While Trudeau selected “a cabinet that looks like Canada” with gender parity, there was no one of Chinese or Filipino origin, and no Arab ministers at the time of publication. The PM may support Muslim communities wholeheartedly, yet hate crimes against this community are at the highest they have ever been. Local calls for protection for mosques, after a fatal Quebec City shooting, haven’t been heeded either. But, “Eid Mubarak” socks have gone viral.

In the same spirit, while Trudeau’s attendance of Canada’s Pride parades continues to wow the world, we’re still waiting for his concrete steps of action that strengthen the rights of LGBTQ communities. Later this year, for instance, the Liberal government is expected to introduce legislation to erase past convictions for sexual activity with a same-sex partner. This has aided the discussion surrounding LGBTQ issues, but they’re all still just verbal plans—ideas without an engine.

And then there are the Indigenous and Black populations of Canada, who seem to be a complicated side-thought in Trudeau’s agenda. The police-related deaths of Andrew Loku, Jermaine Carby, and Abdirahman Abdi—all men of colour—have not warranted official word or action. Nor have those serving long immigration detentions. While Trudeau assures Canadians that he respects Indigenous communities of Canada, there is yet to be any official intervention into the lagging inquiry into murdered and missing Indigenous women and girls or the Truth and Reconciliation Commission’s 94 calls to action.

We’re not used to a leader who will take off his shoes and walk into a mosque or a teepee, sit with us, and tell us, “You belong here.” But, with only two years left to go, it’s time for more concrete policy that addresses the underlying issues and fears of these minority communities.

Pull up your socks J.T. There’s a lot of work to be done if Canada is going to become the country you say it is.

CORRECTION: The print version of this story, which appears in our September/October issue, incorrectly states that Trudeau did not have an LGBTQ-identifying minister in his cabinet at the time of publication. This regrets the error.