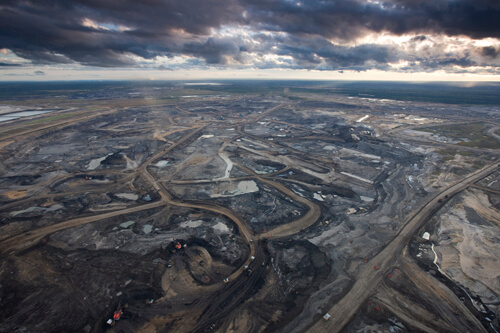 Canada’s oil sands have long been a lightning rod issue in heated debates over national energy futures, economic growth, ecological degradation, and climate change. These tensions are driven in part by the industry’s environmental characteristics: They constitute the fastest growing source of greenhouse gas pollution in Canada, generate significant impacts on boreal forests and species such as woodland caribou, and affect regional freshwater resources.

The Canadian oil sands constitute a staggering 10 percent of technically recoverable global oil reserves. Deposits of molasses-like bitumen—a viscous form of petroleum that is embedded with sand, clay, minerals, and water—underlie 140,000 square-kilometres of boreal forest and muskeg in northern Alberta. Open pit mining operations, where bitumen is found within 75 metres of the surface, are responsible for almost half of current oil sands production and generate severe and potentially intractable environmental impacts that Canadians cannot turn a blind eye to.

For instance, fluid tailings are a byproduct of oil sands mining, where large amounts of chemical laden water are used to extract bitumen from the sands. The fluid waste from this process is then deposited into manmade holding lakes called tailings ponds. More than 1.2 trillion litres of toxic sludge containing cyanide, acids, arsenic, and lead is currently sitting in these enormous open water bodies, posing significant health risks to local communities and wildlife. When oil sands mining first began, companies did not know how to treat and reclaim these tailings, so the ponds were permitted to grow. In 2009, the Government of Alberta finally made an attempt to manage them; however, every single company failed to meet these regulations, and rather than being enforced by the regulator they were simply scrapped.

In 2016 regulations were introduced a second time. But treating tailings remains both difficult and expensive, and all eight existing oil sands mines have since submitted plans to meet the new rules that are largely insufficient. Based on the submitted plans, the tailings ponds can be expected to grow to a peak of approximately 1.5 trillion litres that will not begin to decline for another 20 years. Moreover, almost all the plans rely on placing tailings in the bottom of mined out pits once operations are complete, covering them with water and creating manmade “lakes.” Companies have proposed that it will subsequently take as long as 70 years after mining operations are finished to reclaim these sites and return them back to Canadians. This approach is a microcosm of the industry’s predicament, wherein properly accounting for environmental costs of operations is deemed prohibitively expensive, so they are simply minimized, disregarded, and punted down the road into an ambiguous future.

Adding to the risk that taxpayers might ultimately be left on the hook for billions of dollars in tailings cleanup costs, the economic viability for Canadian oil sands mining in the 21st century is increasingly uncertain. Industry insiders say the 50-year era of multi-billion dollar mining megaprojects has likely come to an end. Oil sands mines are notorious for their exceptionally high start-up and operations costs, and while mega-projects were profitable with oil prices of over $100 USD per barrel, the international oil price crash in 2014 has delivered a painful blow to the industry.

Many operators have struggled to break even since the 2014 slump began. Numerous proposed mining projects have been indefinitely shelved, and international players Total, Shell, and ConocoPhillips sold off almost all of their oil sands assets to Canadian companies. Many investors are growing concerned about what the future holds for the mineable oil sands as an expensive and carbon intensive resource.

With these high economic stakes in mind, governments have undertaken several initiatives to encourage innovation in more efficient and environmentally cleaner oil sands mining technologies. The Government of Alberta’s Climate Leadership Plan (CLP), for instance, introduced an economy-wide carbon price and legislated a cap on oil sands emissions. The CLP provides a mechanism to prevent Canadians from falling off a steep economic cliff in the near future due to a potential financial bubble—or “carbon bubble”—in a world where even baseline International Energy Agency projections suggest decarbonization of energy systems will be inevitable in the 21st century.

But as demonstrated by the consistent failure of industry to adequately tackle tailings cleanup in the last 50 years of operations, reducing the environmental footprint of oil sands mining is a technically challenging and expensive undertaking that extends far beyond emissions management.

Ultimately, the future for oil sands mining is uncertain at best. Companies should account for the true social and environmental costs of their operations now, rather than assuming future revenues will be sufficient to cover them. As the dismal state of the decades-old tailings problem illuminates, current operators must be compelled to bite the bullet and clean up their immense messes while they still have sufficient income to do so. This will protect Canadian taxpayers from potentially having to foot the bill in a world where mineable oil sands produce increasingly marginal barrels and global energy transitions are well underway.

Jodi McNeill is a technical and policy analyst at the Pembina Institute.