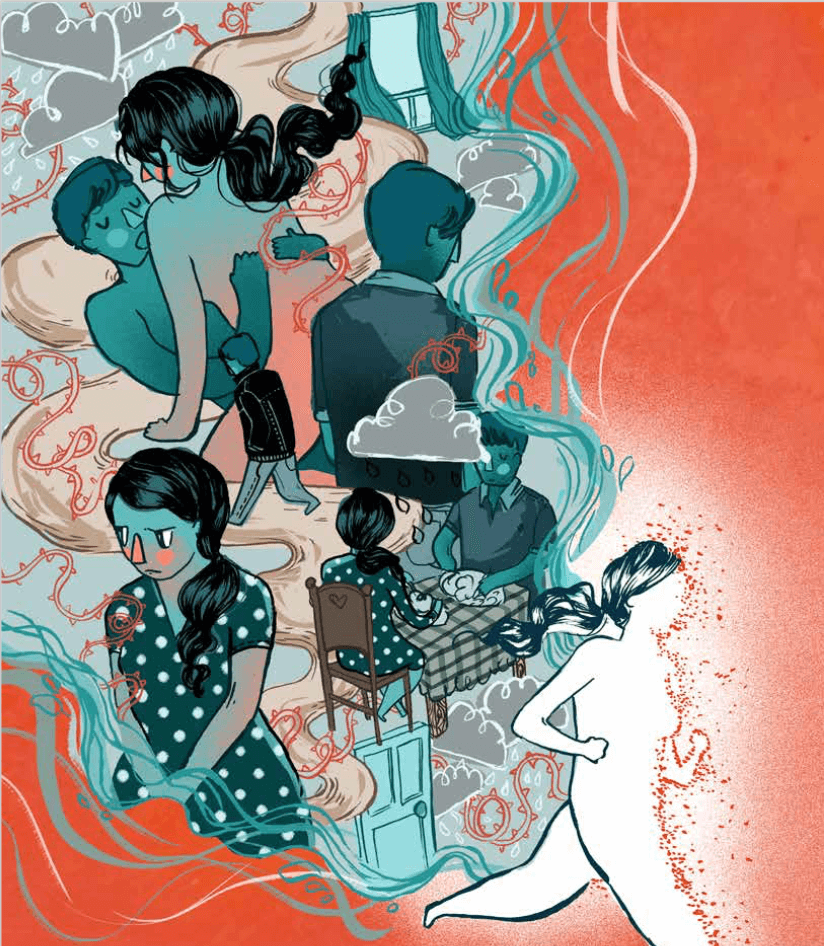 Sex Addict 1 needs sex all the time, but it can be with the same person as long as

1. It’s interesting
2. The person smells good
3. They both come at least once almost every time
4. It is done in many new ways and with a sense of adventure

1. With as many people as possible
2. In as many different ways as possible
3. In unexpected circumstances
4. Without needing to worry about anyone’s feelings

Sex Addict 2 cares about Sex Addict 1’s feelings and is constantly thinking about the lists. Sex Addict 2 also isn’t sure he believes in love – he’s never seen it at least, despite feeling the way he does with Sex Addict 1. Also how can love exist when the lists also exist?

When a Sex Addict dreams of the perfect person to love them, that person is always a Sex Addict. And, of course, at first it is perfect. Sex Addict 2 finally feels that lying does not have to be part of his addiction, that he can have sex regularly with someone he cares about and still be able to nurture his urges and have someone who will try new things, explore his fantasies, and understand his needs. Sex Addict 1 feels that sexual compatibility is probably the way to true intimacy, that the fact that she finally has someone she finds attractive, interesting, good smelling, and funny to have sex with multiple times a day must mean that they are soulmates.

One night when they are out for dinner, Sex Addict 1 congratulates Sex Addict 2 on how decent he is when they disagree—that he never yells or swears at her or even seems to get too angry. Usually, when he becomes angry or upset, he’ll verbalize his feelings instead of acting out. “I’m feeling angry,” he’ll say. “I’m hurt by what you said.” Or sometimes he’ll even break down his feelings further: “I’m not angry with you. I’m just annoyed. I’m frustrated.” Coming from a family of yelling and cursing and emotions that never seemed to go away, Sex Addict 1 finds this trait endearing in Sex Addict 2 and it makes her love grow. Sex Addict 2 says, “Well, I don’t know what we’d really have to fight about. We seem to agree on everything.”

That night they get into a fight. It is the same version of a fight that they will continue to have and that previously was a “discussion” about the fate of their relationship. Each fight comes closer to the inevitable truth: they have different items on their lists. Somehow, in deciding they are perfect for each other, Sex Addict 1 and Sex Addict 2 have fallen back into their old patterns and have been lying.

In fact, if Sex Addict 1 is honest, it isn’t sex that draws her in, or even the intimacy—it’s feeling like her whole body is being erased. She needs to be hugged, she needs to be held, she needs to be surrounded, she needs to smell parts of another human’s body. She might not even be a sex addict at all—sometimes it’s easy for her to think about other things, to let ideas be what hold her, envelop her. Sometimes she dances around the kitchen and that feels almost as good. But if her connection with Sex Addict 2 finds its basis in their mutual sex addiction, then she can never renounce her identity as a sex addict or even be more specific about what it actually is.

It is unclear if we can really frame the situation Sex Addict 1 and 2 find themselves in as being “A sex addict meets another sex addict and falls in love.” This is because if Sex Addict 2 doubts the very existence of love (or at least his own ability to love actively in a way that makes everyone involved feel good), it is doubtful that he has ever allowed himself to exist in the state of “being in love” or that if he has, he has not allowed himself to recognize this state as being in love, or allowed himself to exist within it before rushing off to pursue his addiction.

If Sex Addict 2 has never “been in love” with Sex Addict 1, then it is doubtful that Sex Addict 1 has ever “been in love” with Sex Addict 2. Sex Addict 1 tries to figure this situation out with her friends the way she tries to figure everything out, by speaking. She tells them about the lists. She describes the different positions she and Sex Addict 2 have used. She describes her fear of being alone and her desire to be completely encased. She gives examples of Sex Addict 2’s behaviour and asks for interpretation. She gets almost the same answer, with different diction, depending on the friend: “He doesn’t seem to be a very self-aware person. Whereas you seem to be! I’m amazed by your awareness.” Sex Addict 1 appreciates compliments during times like this, although from the details provided about Sex Addicts 1 and 2, it’s easy to see that this assessment is false.

Sex Addict 1 has not selected her friends according to the trend of picking people whom you admire professionally or want to be in some capacity, who dedicate their conversational power to the discussion of their ambitions and interests and reveal very little of their inner life.

Sex Addict 1, while admiring her friends for their talents and abilities, has chosen her friends for their compassion, creativity, and what she (as much as she can tell, being a generally poor judge of character) thinks is their good hearts. She enjoys the long hours they spend tolerating her as she talks about herself, love, and sex. But since these are fully developed people, they would also enjoy speaking about:

1. Their interests
2. Outer space
3. Animals
4. The existence of ghosts
5. New scientific discoveries
6. The upcoming election
7. Pipelines
8. A new job they may get
9. A movie they just saw
10. Their families
11. The war in Syria
12. Their health
13. A plane that went missing
14. An upcoming event that they have to go to but really don’t want to go to
15. Netflix

It’s hard to say what will become of Sex Addict 2. Some of their mutual friends say they see him going for walks around the city. Some say he’s learning how to be on his own. Some say he thinks about love sometimes, wonders if he’s wrong, thinks that maybe he can do it. He’s always been surprised by the way time moves around him, and maybe it’s a new season now—it’s getting colder. He blows on his hands and pushes them deeper into his pockets.

The world is also changing around Sex Addict 1. Perhaps this is because she is no longer seeing everything through the lens of sex. She always thought she was a pretty decent human being except when it came to sex, and then sometimes she did things that she didn’t quite mean to do. For instance, when she first met Sex Addict 2, she informed him that he was in love with her and then tried to grab his dick through his pants underneath the table, even though they were at the bar surrounded by people and he had a girlfriend. Sex Addict 1 had also been drinking, which of course didn’t help any of that behaviour, but feeling sexual like that felt like being drunk anyway, somehow uninhibited, somehow operating on instinct.

Whenever Sex Addict 1 thinks about this behaviour in isolation, she thinks that this must be the behaviour of a bad person, that it’s the addiction, but then when she turns it around and looks at it another way, it seems like most every person is at least a little like that.

Other times, it’s as if she’s separate from herself in those moments and that there is a real split in herself and that the her who needs sex is there to destroy the her who needs tenderness, the one who needs to be shielded, hugged, cared for. Sex Addict 1 has never understood why she can’t occupy both these spaces at once and thinks something must be wrong with her.

As she runs in the morning, she feels the same thing—the borders of her physicality break up so that the heart that has always been a little too sore in her is released and beating and her brain is quiet and sun is staining the sky all over in pink and purple and orange.

Jess Taylor lives, works, and writes in Toronto. Her first book of short stories, Pauls, was published by BookThug in 2015. She is currently working on a second collection, Just Pervs, and a novel.