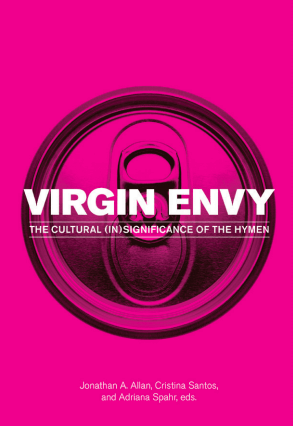 Virgin Envy: The Cultural (In)significance of the Hymen
Edited by Jonathan A. Allan, Cristina Santos, and Adriana Spahr
University of Regina Press, $27.95

Losing your V-card, popping your cherry, your first time: losing one’s virginity is a sacred rite of passage in many cultures—but the contributors of Virgin Envy aren’t buying into the archaic and stereotypical concept.

In Virgin Envy: The Cultural (In) Significance of the Hymen, an anthology of essays about the taboos surrounding virginity, editors Jonathan A. Allan, Cristina Santos, and Adriana Spahr challenge popular myths about abstinence, purity, and chastity.

Drawing on contemporary and eclectic pop culture references to drive their arguments, the authors of Virgin Envy question American culture for its obsession with the hymen. In “The Politics of Virginity and Abstinence in the Twilight Saga,” Allan and Santos analyze Twilight’s virginal protagonist, Bella Swan, and her uncontrollable sexual desires. While the moral issue of chastity is often represented in Bollywood films, an essay titled “Bollywood Virgins” by Asma Sayed illuminates a still-pervasive theme common in beliefs about virginity: its so-called symbolism is entirely patriarchal.

Virgin Envy perfectly equates virginity to air—encompassing our society and surrounding our cultures, genres, and canonical texts of popular culture—as it boldly and unapologetically reclaims the meaning of the term “virgin.” Without giving too much away, spaces to talk about the tensions of “normal” and “deviant” sexual desires are opened. And, determining who is and who isn’t a virgin is fascinatingly at the forefront of this text.

As a culture, we believe in order to be a virgin our hymens must be intact. But Virgin Envy takes this belief to task as “virginity is never one thing.” Today, contemporary television shows like Jane the Virgin challenge our beliefs surrounding virginity without patronizing those who deeply believe in cherishing it. Despite this progress, no one comes close to touching the intimacy of the taboo topic quite like Virgin Envy.