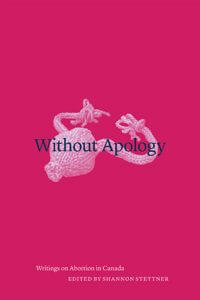 Without Apology: Writing on Abortion in Canada
Edited by Shannon Stettner
AU Press, $29.95

Kristen was in high school. Mackenzie was 23. Jess made a pros and cons list. Each woman had an abortion. Without Apology: Writings on Abortion in Canada centres around a woman’s right to choose. In this five-part series, women share their personal stories, alongside a detailed history of the criminalization of abortion in Canada. Editor Shannon Stettner powerfully tends to the intimate—and sometimes political—conversation first ignited in the 1960s when cis men wrongly dominated and interrupted the abortion debate. The collection is at times grim, harrowing and passionate, but it ultimately solidifies the notion that a woman’s body is solely hers—point, blank, period.