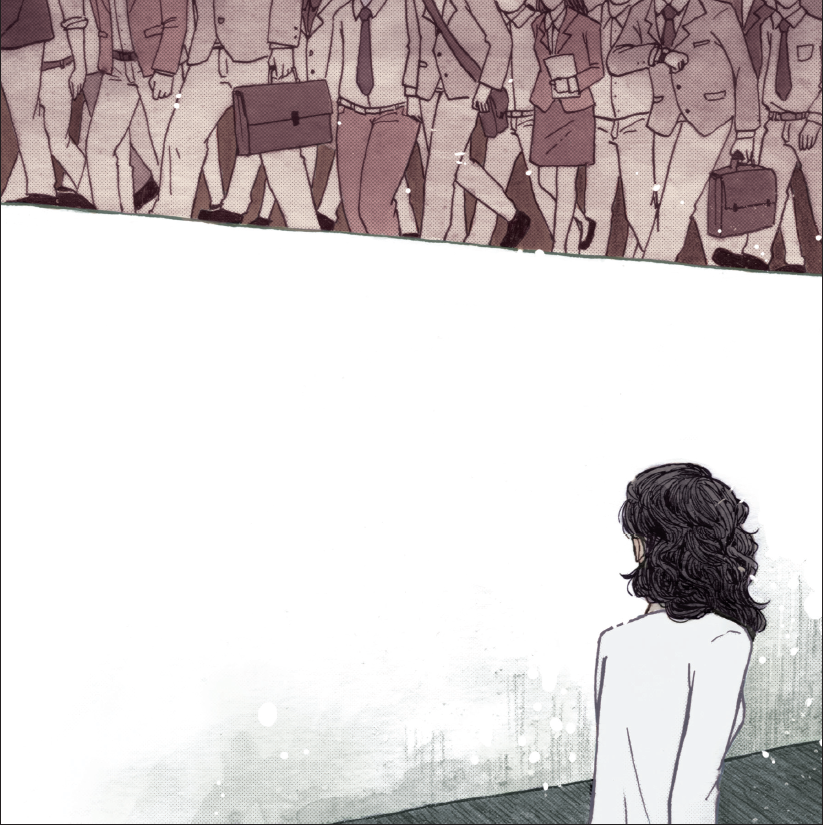 The months leading up to my graduation this spring were a mix of excitement and desperation. Excitement, because after four years of journalism school at Ryerson University my love for academia had turned sour—I was aching to be done. Desperation, because I knew once I was done, my unemployment would be more apparent and stark than ever. I pored through job listings for hours on end, constantly tweaking my resumé, hitting the “apply” button so many times I started to forget which jobs I had actually applied for.

No emails back. No phone calls. Not a single interview. And all of this was made worse by headlines reminding me just how completely screwed I was. “Indisputable Evidence That Millennials Have It Worse Than Any
Generation in 50 Years,” read the Atlantic in February 2014. “Ontario youth unemployment among the worst in Canada,” from CTV in September 2013. “Why are so many of Canada’s young people out of work?” CBC in June 2013. “Recent university grads increasingly jobless, study shows,” Globe and Mail, September 2014.

The statistics were muddled. While one mid-2013 article on the CBC claimed that youth unemployment was at 14.5 percent, another, in Maclean’s, asserted serious youth unemployment was simply a myth, citing a Statistics Canada study that put unemployment in Canada for 25-29-year-olds at 7.4 percent in 2012. “[The] stagnation in the quality of jobs may explain some of the frustration,” the Maclean’s article allows. “Some university graduates are likely settling for lower-rung jobs that they would have avoided in the past.” (Perhaps true—but perhaps also this means that we’re so desperate to avoid unemployment, we’ll take anything.)

But beyond the headlines, there are the actual people of this highly discussed and debated generation—and, speaking as one of them, the employment drought sure feels real. Every time I read one of these articles, mostly written by someone who isn’t a part of my generation, it’s like we’re mice in a lab. We are the Boomers’ and Generation X’s greatest sociological experiment: scurrying through preset conditions, our achievements and pitfalls analyzed by people who are utterly detached.

“I think a lot of older generations are out of touch with the way that education and professional fields have changed,” says 23-year-old Kelsey Leung, “especially those who are comfortably collecting paycheques for jobs that they have had for quite some time.” Leung has a bachelor of arts with honours in history from Queen’s University, and a bachelor of education from University of Toronto. Currently, she’s a barista—a job that doesn’t require two expensive degrees.

Like myself, Leung has been told millennials are simply entitled and lazy. Apparently, our desire for meaningful work after grueling, expensive, and mental-illness inducing degrees means that we are spoiled, ungrateful children. These criticisms, more often than not, come from middle-aged suburbanites who seem to have scored jobs straight out of school in the 1980s and never had to contemplate the possibility of being in their 30s and making minimum wage.

“I think that if being entitled means that I feel upset that I put in thousands of dollars of my own money and in scholarships towards my education,” says Leung, “and have been told that it will be at least four to six years before I get a full-time contract position—minimum—then I am absolutely entitled.” If anything, my generation is not entitled enough: We willingly scrape through terrible jobs, and work for free after years of education. Most of us feel like we can’t afford a sense of entitlement. Pride is expensive. And though we deserve to have some, we know that pride means no exposure, no paycheque, no chance.

I certainly didn’t feel entitled when, after graduation, I was eager to take on a part-time babysitting gig. I never even asked how much it paid. All I saw was a job. Despite receiving my pricey degree, I was in the exact position as I was before I earned it. I was still writing for free, and, eventually, months after graduation, only making a little money for articles. And I was still spending way too much time on job search websites like Indeed and Monster, cursing at the computer screen every time I came across the dreaded “five years experience necessary.” Amidst pages of job postings that, according to the requirements, I was not qualified for, I felt like Major Tom lost in space.

I started to think the only people landing decent jobs were people who were privileged enough to have the right connections. Some of my fellow graduates had connections within their family, others came from wealthy enough backgrounds to not have to worry about unpaid work. My parents immigrated here with my sister and me in 1996 and, because of that, despite their successes, they haven’t been established here long enough to be able to provide those connections for me.

In the end, my babysitting job fell through. Without full access to a car, it was another job that couldn’t work out. And so by July, I fantasized about just packing up and leaving. There had to be a job for me somewhere in this world; and not just any job, one that would actually make me happy.

That’s exactly what 29-year-oldDavid Matijasevich was thinking in June 2013 while he was working on his Ph.D. in political science at Carleton University. In his fourth year, Matijasevich was, financially, on his own. Not wanting to take on more debt, and knowing that the teaching assistant position provided by the school wouldn’t be sufficient enough to pay rent, he made the move to Singapore. He worked on his Ph.D. from there, where he was able to find work as an associate lecturer in social sciences, and an instructor and academic manager at an adult education centre. Matijasevich just finished his Ph.D. in September.

Matijasevich says that it disappoints him to hear Generation Y labeled as entitled. “Entitlement means expecting something without working for it,” says Matijasevich. “Yet young people, particularly during their school days, seem to be working harder than ever.” Matijasevich recalls his days as a teaching assistant at Carleton University, in which all 15 of the students in his class were working part-time jobs during their studies. Some of them were working more than 20 hours a week, on top of schoolwork.

Matijasevich’s solution, however, is not for everyone. Despite my fantasizing, I know I’m not ready for a move like that. Going to an entirely different country, let alone a different continent, is an extreme solution to paying the bills. It means leaving behind the comfort of home, loved ones, and security—just to not become trapped in the exploitative monotony of minimum wage service industry jobs. Getting a job isn’t necessarily the tricky part, it’s getting a job that doesn’t make you hate yourself for ending up in the place that you swore you wouldn’t. The hard part is getting a job that makes you feel proud, that allows you to comfortably move out of your parents’ house, that makes it possible to pay off your Visa bill without your chequing account looking like a wasteland.

I’ve been told I ought to go back to my old jobs—I worked as a cashier at Indigo for two years, and then worked four semesters and one summer as a part-time shelver at the Ryerson University library. (My last job ended when the library no longer had enough work for part-timers.) I wonder if I should. After all, is working for free any better than my days of asking people whether they wanted their receipt in the bag? Yet, it pains me to think I might have to stand behind the same cash register I stood behind when I was 17. “But I have a degree now!” I think to myself.

I sometimes feel like my resumé is one giant “but I have a degree now!”

At family functions, I seek out any distraction and avoid all relatives so I won’t be asked that dreaded question, “What are your plans now?” If caught, I mumble the usual “Looking for better work; freelancing; doing my best.” This answer has never impressed any of my relatives.

But is it even polite to ask that question anymore? It’s hard to chew my food when I’m thinking about how much money is in my bank account, and whether there was a typo in the last resumé I sent out. There should be a new rule that you should never ask a young adult in a terrible economy what their plans are. It’s just bad etiquette. I see the generation gap present in the apathetic nods of my relatives when I explain my mish-mash of ways to make some money, practically pocket change compared to their salaries. They seem painfully out of touch when they declare I ought to go to New York; I’ll get a job right away. If only it were that easy.

I don’t regret going to university. And I don’t feel like it’s useless. Education is important and it does make a difference—my career in journalism would not be even close to where it is now without my degree—but it would be disingenuous to say the strenuous journey to find good work hasn’t made me question whether it was all worth it. I can’t be the only one. Now that university degrees are the norm, I bet many have trouble seeing the value in a bachelor’s degree. There are so many of us with degrees, after all—currently, 1.7 million students are enrolled in degree programs across Canada. Degrees are something you have to acquire to get ahead, yet getting one doesn’t guarantee that you will.

For now, Matijasevich, Leung, and I are all doing the same thing. There’s one common thread between going to Singapore, working as a barista, and picking up odd freelancing jobs: we’re all doing what we feel we have to do to make it to the place where we are financially stable and happy. Say what you will about the flaws of my generation, but there is no doubting that we are a perseverant one. Maybe I’m entitled, stubborn, or just another foolish kid part of an underemployment statistic. Maybe I am the quintessential millennial being analyzed in some think piece written by a Generation Xer with a good salary. Maybe. But mostly I like to think of myself as just another person who works hard and wants the best for themselves. I’m one of the mice in the social experiment that older generations have subjected me too, hoping to escape the maze.

Hana Shafi is a journalist and artist in Toronto. She spends her time ranting online, doodling, and re-watching Lord of The Rings.