OCAP image for the July 16 rally and march.

The Ontario Coalition Against Poverty (OCAP) led a rally and march last weekend in protest of Toronto’s Pan Am Games. As the event page description reads, “If there is money to spend on circuses, then the resources can be found to end the need for food banks, tackle the mounting problem of homelessness and ensure that everyone has decent, affordable and accessible housing.”

It’s a reasonable point—especially considering whenever there is a demand for shelter and livable wages, the counter argument is always the excuse that there isn’t enough money. Yet, more than $700 million was spent on the athlete’s village and another $10 million was allotted for the province’s Pan Am secretariat. Neither of these costs are included in the games’ $1.4-billion budget.

So, just so we’re clear: Our governments didn’t have enough money to put services in place to mitigate against 18 reported deaths from amongst Toronto’s homeless population, but Pan Am execs will receives $7 million in bonuses. (But hey, they have to split it.) Oh, and let’s not forget the unnecessary infrastructure added to the public’s bill, or the $3.8 million that was spent on lighting up a bridge. 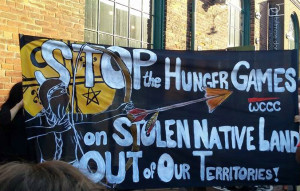 Photo taken at the rally and march July 16.

In Toronto, insufficient shelter, unlivable wages, and empty food bank shelves are all issues that have been shoved under the rug during the games. Instead, we get the Ontario Provincial Police (OPP) working alongside Pan Am games security to protect tourists from, well, the homeless, apparently. The attack on the poor—like dislocating low-income families and the homeless or making arrests for petty crimes—happens years in advance. “People don’t want to see unsightly people on the streets when they’re trying to sell an event,” as Sophy Chan, an activist and community engagement co-ordinator at SPORT4ONTARIO told Now in March.

And yet, all this is not what city officials see as embarrassing. Concerns are directed on more important matters, like pretty floors for the housing in athlete’s village. “Unfinished floors and ragged walls without baseboards would reflect poorly on our region’s reputation as hosts. Quite simply, the village wouldn’t look finished,” TO2015 spokesperson Teddy Katz tells The Star.  And here was me thinking that an embarrassing host was someone who couldn’t take care of their own residents. But, Ontario is “helping” students who volunteer for the games—the population who the province makes poor. So that makes up for it (but not really). 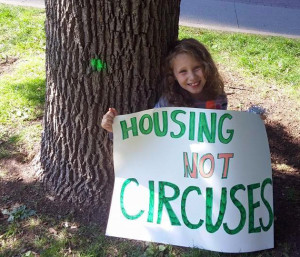 My daughter attends a city-run daycare which received an overabundance in free tickets for the games. When I attended an event I saw overpaid security (police are making $80 an hour) thoroughly check daycare children, in unorganized line-ups, leading to under-attended games. Public money could have been spent better elsewhere, but that’s just my hunch.