It was an emotional mid-June week. On the 13th Maggie’s, Toronto’s Sex Workers Action Project, hosted a Sex Worker Solidarity rally. That afternoon, a crowd, mostly women, gathered at Toronto’s Allan Gardens to celebrate sex workers. There were theatrical and dance performances, as well as food and childcare. Bubbles were blown through the air—as well as positivity that carried the chants of “Sex work is real work” and “Rights not rescue!” 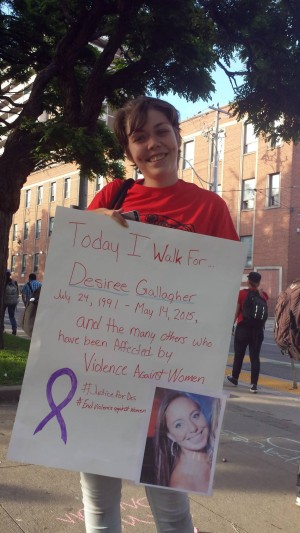 Four days later, a majority of women joined again in solidarity, to march in Toronto’s Downtown East neighbourhood. Reclaim the Streets was about remembering victims of gender-based violence, like Carolyn Connolly, whose 2008 murder inspired the march. It was also a celebration: last year’s march organizers, like the Ontario Coalition Against Poverty, won their demand for 24-hour women and trans drop-in centres.

SlutWalk Toronto also walked as a contingent in the Dyke March. This reminded me of last year’s march when I was surprised by the barrage of questions asking me why I participated. They asked me: How does a march accomplish anything? 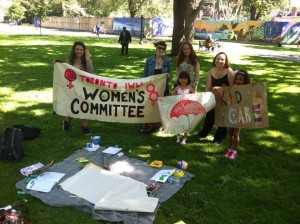 “The problem is what happens after the march. Sometimes it ends in violent confrontation with the police, and more often than not it simply fizzles out,” Moises Naim writes in an April 2014 article Why Street Protests Don’t Work. Naim argues that using social media in the organizing process may skip the more tedious steps, but it also skips the solidarity built in a movement’s infrastructure: “Social media can both facilitate and undermine.”

Yet, the aforementioned example regarding OCAP’s gain of drop-in centres is proof that things don’t always just “fizzle out.” There is also the argument that these rallies, marches, and demonstrations bring awareness to a cause. Still, I’ve struggled—is this enough? Shouldn’t energies be spent on direct actions? That feeling, though—that feeling experienced at the march—is so worth it. When I was marching at Reclaim the Streets, what I was experiencing was not feel-goodism, but community. How refreshing it is to hear, as a survivor of domestic violence, that despite what social and legal places may have said: “You are not crazy. What has happened to you and what is happening to others is wrong.” 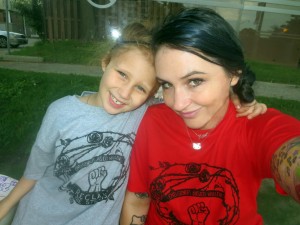 My daughter and I after the march.

Building community is very important, and so is taking care of one’s self. Feel-goodism is a superficial, shallow thing; something that requires no sincere effort. Feeling good is different. Sharing joy and taking care of yourself is critical, as the old saying goes, “you can’t take care of others without taking care of yourself.” In a world full of issues and systems that need to be dismantled, it is easy to get tired and down. If something is uplifting and connects like minds, it is just as important as the gritty hard work.