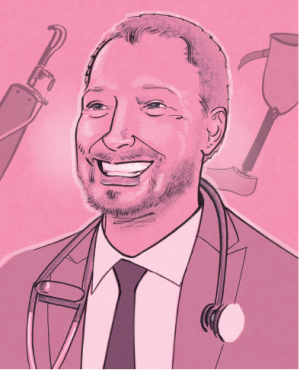 IN 2010, RYAN MEILI STOOD in the medical clinic where he worked, on the west side of Saskatoon. A girl named Maxine walked in. She was a 20-year-old from the streets who moved as if she were 91. She wanted antibiotics, but really needed a hospital. With a case of full-blown AIDS and a drug addiction, she was getting weaker. Meili remembers the sound of her lungs through his stethoscope, like a rubber boot being pulled from the mud. There was only so much he could do—the damage was done. Maxine’s life had been tragic, full of poverty, dysfunction, and abuse of all sorts. He finally got her to a hospital, where he visited twice a day, but she came and went, often scoring drugs in between.

Meili says stories like Maxine’s are much too common in Canada, and the 39-year-old Saskatchewan-based family doctor is fiercely determined to break the pattern. “What we can do in response as health care providers is really limited,” he says, “because we’re not really able to impact the root cause of illness.” But Meili decided to try anyway and in 2013, he created Upstream, an organization that seeks to address the social determinants of health, such as poverty, nutrition, education, and housing.

In just a few short years, the movement is already making strides: sparking conversations on social media via Facebook, writing blogs and articles for national news outlets, and creating partnerships to deliver awareness on determinants in powerful ways. In 2013, Meili learned that Saskatchewan and B.C. were the only two provinces in Canada without a poverty reduction strategy, so Upstream helped spearhead the recent Poverty Costs campaign, working with the Saskatoon Anti-Poverty Coalition, Saskatoon Food Bank, Saskatoon Health Region and other groups keen to implement a plan.

Through sharing hard facts (the economic cost of poverty in Saskatchewan is $3.8 billion due to increased health and social services), a fierce letter-writing campaign, and asking disadvantaged men and women to share their stories online, Poverty Costs turned out to be a big win, with the Saskatchewan government committing to a poverty reduction strategy in October 2014.

“It’s about taking what we know, getting people aware of it, turning that awareness into real policy change and, ultimately, improving the health of Canadians,” says Meili, who realized he wanted to work with under-served communities when he started practicing medicine. He felt it mattered more to service patients most in need. Then, during his first year of medical school in 2002, he met Dr. William Albritton, professor of pediatrics and then dean of the College of Medicine at the University of Saskatchewan, who further inspired him with the idea of social accountability—that doctors should be mindful of growing social concerns.

The following year, Meili and two friends approached Albritton with the idea to start a student-run clinic in Saskatoon’s inner city. “When he first got started, I told him the problem is not going to be setting up the clinic, because you’re committed and have that ambition,” remembers Albritton. “The success of the clinic will depend upon attracting people who will follow you, who will maintain that same degree of commitment. And he’s tenacious; he’s done a very good job of finding
people with those same world views.”

Eleven years later, Meili is now a supervisor at the Student Wellness Initiative Towards Community Health (SWITCH) clinic that sees about 50-plus clients every shift, three times per week. “Some days are tougher than others. Some days you take a story home, you get touched by people. It’s really hard,” he says. “But it’s even tougher to not be there. It’s tougher to walk away. Once you’re aware that there are these injustices and people who are struggling, you want to be there to help.”

Meili would surprise a lot of people if he ever did walk away. “He’s always had this intense, clear vision of the world that he believes we could have, with no sense of exhaustion in pursuing that,” says Liz James, a longtime friend who met Meili while the two were involved with the student activist network at the University of Saskatchewan. “Things seem possible to Ryan that not everybody believes are possible.”

Take, for instance, the time he was living in Halifax in 1999. He was working at the Big Life Café as a cook and server and heard about an initiative out of the Falls Brook Centre, a local community hub. People were casually tossing around the idea of delivering prosthetic limbs to poor communities in Central America as part of the Limbs to Light campaign. That summer, Meili tore out the seats of an old yellow school bus he rented, strapped himself in and drove from Saskatoon to Halifax, collecting unwanted limbs along the way. Loaded to the roof with arms and legs, he drove down the east coast of the U.S., until he reached Nicaragua. In local villages, victims of landmines had been fashioning scraps of homemade material into limbs. Meili dropped off his stash to the Red Cross and, one month later, headed back home.

Travelling back and forth between run-down areas of Central America, and disadvantaged communities in Saskatchewan, Meili witnessed the same kinds of injustice, gaps between rich and poor. So began the shift from a direct hands-on, people-helping person (which he still is) to thinking more in terms of the system as a whole, rethinking not only about health care, but how we make decisions as a society.

In his early days with the SWITCH clinic, in 2006, Meili was invited to speak at a New Democratic Party (NDP) Convention where he challenged the ruling government to do a better job of balancing resources. “I think from that experience, I realized if I wanted politics to work that way, I needed to get more involved.”

So he did. He ran twice for leadership of the Saskatchewan NDP, first in 2009 when he finished a close second, and then in 2013 when he lost by 44 votes. He’s not sure he’ll run again, but it’s possible. “It would have been an excellent place to bring these ideas forward, but right now, what I’m able to do with Upstream in practice and research is valuable,” he says. “The challenge now is to try and accomplish something dramatic. What we’re really trying to do is apply a new lens to our political decision-making and to do that is pretty ambitious.”

Meili hopes to steer what he calls “an issue that cuts across political lines” and move away from a system that “flounders from crisis to crisis” to one that presses societal concerns—such as the life circumstances of young girls like Maxine.
Maxine never had chances, and her fate isn’t difficult to predict; it’s right there in the first chapter of Meili’s book, A Healthy Society, published prior to his second political run. Meili had been working with a First Nations community in rural Saskatchewan when he got the news. Maxine ran back to the streets she’d known since she was 13 and was hit by a car that shattered her pelvis. Back in the hospital, she contracted pneumonia. She never recovered and died just before her 22nd birthday.

“What often escapes our attention when considering the tragic story of one individual is how intimately it is connected to all of us, to the collective decision-making process that is electoral politics,” says Meili. “It is politics that decides whether young women like Maxine live or die.”