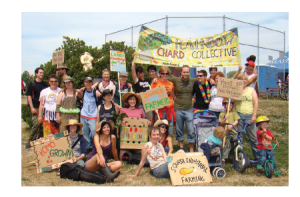 All the queers I knew were leaving small towns for the city. And here I was, along with a small handful of others, living in Victoria, B.C. and working on a farm—all of us tending dreams of being out on the land. We got to do it part-time; transitioning between the worlds each day.

I was lucky. As I set foot on that south-facing slope every morning that led gently up to the wood-panelled farmhouse through dewy rows of beets, carrots, lettuce, edamame, raspberries—I knew I’d found a kind of home. There was something brewing on that farm in Central Saanich. And it wasn’t just the fierce love of healthy soil and food, or the warm sense of community shared between the three women who ran their farms together. It wasn’t only the intoxicating beauty and abundance of Southern Vancouver Island. It was something deep, something political. And it was something that had the space to be queer.

It was this soil that gave the Rainbow Chard Collective root.

Let me back up a little.

International Women’s Day, 2007, Victoria, B.C. I told a woman at a bar I wanted— needed—to work at a farm. I told her I missed it; that I had experience. I’d spent two years farming all over Britain before moving to Victoria. She walked me over to her partner. The farm in question was run by a straight woman, but had what could be called a burgeoning lineage of queer women apprentices. I joined the crew. My first week on the job, I changed my name to a male name. Without knowing it at the time, I represented the first in a line of queer trans farmers who were going to become involved.

There’s a lot of time to talk while you do farm work. One day, the year before I joined the farm, too hot and delirious in the greenhouse, and thinking about their unique situation in farming with other queers, a couple of soon-to-be friends of mine laughed and joked. “We should form the rainbow chard collective!” It stuck.

The first year I joined the farm, we were reaching critical mass. The dreams and schemes got bigger. We decided Victoria Pride should be our first target. All the clean gays with tight bodies and corporate floats were about to get a taste of filthy, dirty working queers of all shapes and genders. With our newly-painted banner proclaiming: “Rainbow Chard Collective: redefining the family farm,” we stood in line waiting for the parade to begin. My painted T-shirt said, “gender modified not genetically modified,” with a big trans pride symbol beside it and “fag fresh” printed on the sleeve. Other collective members in dirty work pants and plaid, rolled-up-sleeved shirts raised signs high declaring “Homo Grown,” “Squash Industrial Farming,” and “Lettuce Rise Up.”

We were ready. With our wheelbarrow and pre-mixed mud bucket we ventured into the crowd offering mudspankings (and demonstrated freely on each other). Playfully irreverent, we celebrated our lives as queer farmers publicly, whipping each other with garlic scapes and offering bunches of rainbow chard from our wheelbarrow to the crowd.

Our function was twofold: to show the world queer farmers existed (despite popular conceptions of the farmer as a straight, white, married man in his 50s) and to show the queers and gays too where their food comes from—or has the potential to, anyway. Our hope was to model an exciting queer alternative, one where connection to the Earth and our food is primary, and just as important as our queer identity in making up who we are. The farm owner was with us that day, along with two of her kids and a handful of straight farmhands, one of whom sported a pink tutu and rainbow suspenders, and nothing else but his straw hat and work boots.

Speaking of attractive farmers, that year Rainbow Chard published its first queer farmer calendar, both because it was fun and to raise awareness and make connections. “Farmer Tans” featured many of southern Vancouver Island’s queer farmers and allies, photographed with strategically-placed sunflowers, corn leaves, tools and more. The calendar was a huge success: were heard from queer farmers all over Canada and the world—so excited to discover they were not alone.

It’s not easy being a queer and a farmer.  Farming collectives like Rainbow Chard, where queer farmers can be themselves and flourish, are sadly rare. Too often queers have to choose between their deep-seated desires to be on land and a community that accepts and understands their sexualities and genders.

We all know how queers leave small towns because it’s dangerous. Amplify that by the ratio of straight-versus-queer in rural areas and you’ll understand how limited queers’ access to rural life can be. And sometimes those small places can feed other parts of a person that a big city just can’t. Not all gays were built to survive encased in concrete. I know this one wasn’t. I’m still working on how to be on land in this country that’s affordable and where I can be at ease as a trans gay man.

After nearly a decade dedicated to farming and gardening, my focus these days is on learning about wild foods, herbalism and wilderness living. Food and social justice remain central to both my own and Rainbow Chard’s vision.

Another calendar, a queer youth workshop on food, and a couple of zines later, Rainbow Chard is still going strong. In the coming year we’re starting work on a queer and queer-friendly farm directory to help direct apprentice farmers to spaces that will be supportive to them. If you’d like to be in touch with the group you can visit our website rainbowchardcollective.wordpress.com.

Here’s to queers finding space in the places that feed them, wherever those may be.

Larkin Schmiedl is a freelance journalist living in Vancouver, B.C. who loves to write on issues of social and ecological justice. You can find more of his work at larkinschmiedl.wordpress.com.