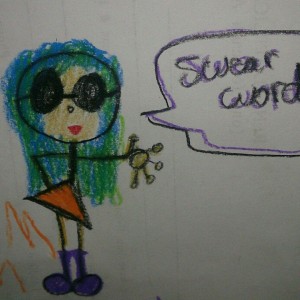 Swearing—using words decided offensive— is ugly and trashy, if you’re female. Online dating advice calls it “trashy” and “nasty.” One really sage poster offered this: “I believe that, among females, sexual promiscuity and a foul tongue may be related … when one prostitutes themselves sexually it seems that, in many cases, they adopt the tongue of a prostitute.”

But that’s the internet, where everyone is an expert and all personal thoughts are published. Surely the offline world isn’t so self-righteous when it comes to women and their language. Right?

Perhaps not. In February 2013, for instance, female students at a US high school were told to take a pledge to not swear, something a resource room teacher at the school described as a really sweet and innocent treat for its lady folk. Guys were allowed to speak as they wished. A unique situation, maybe, but it points to a general sentiment that women and girls should watch their mouth.

In the blogosphere, some come down on both sides of the issue: “When a man swears it’s annoying. When a girl swears it’s ugly. Plain and simple,” writes one blogger signing off as “Mom.” And recently, on Eyewitness News Rebecca Davis shared a story in which she Tweeted “Fucking hell” in response to a man raping his sister. She was quickly chastised for her use of profanity—drawing arguably more public heat than the rapist.

I’ve been there too. I’ve been told that when I swear I am uncreative, that I am bastardizing the English language. This is despite the fact that I’ve received academic awards since childhood for my extensive vocabulary and firm handle on the language that I am apparently bastardizing.

A few years ago, a psychology professor at England’s Keel University named Richard Stephens led a study that found swearing can help with pain relief. “Swearing is such a common response to pain that there has to be an underlying reason why we do it,” he tells Scientific American.

If this is the case, women and girls should restrain from this relief because it isn’t pretty and ladylike? I should lie about “Fuck” being my favourite word because it makes me a less than nice girl? Really, being female already makes me dirty to society in so many other ways, I’m not going to worry about it—though I know a few choice words to respond with.