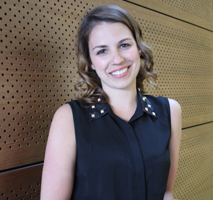 Photo of Anne-Marie Roy from the University of Ottawa Student Federation website.

“Locker room boy talk or the perpetuation of rape culture?” Has been the debate since the student body president of the University of Ottawa spoke out about a sexual conversation where she was made the topic.

In a statement released yesterday, March 2, through Facebook Notes Anne-Marie Roy writes, “The fact that the five men could so casually discuss and joke about me and the position students have elected me to hold in such sexually violent ways points to how normalized rape culture, misogyny and sexism are on our campus and in our society.”

The Belle Jar has published the screenshots which include comments like, “Someone punish her with their shaft,” and “Well Christ, if you fuck Anne Marie I will definitely buy you a beer.”

Roy told CBC News that after confronting the men, they sent her an apology via e-mail. “While it doesn’t change the inadmissible nature of our comments, we wish to assure you we meant you no harm. Content of our conversation between friends promotes values that have no place in our society and our campus, on top of being unacceptably coarse.”

They made sure to include “between friends.” It was a private conversation, so why the persecution? First, because it was published. We are constantly told to be careful of what we publish on the internet, it is Internet 101. This goes doubly for anyone who opts into public life.

Upon being elected to represent a group of people, one forgoes  “Regular Joe” status and takes on all the responsibilities that come with the position. That is why I am not the mayor of Toronto. If I want to get offensively drunk at the Danforth I can do it without making the news. If I did want the responsibility I would trade that privilege.

Time will tell if the law agrees with this thought process as four of the men are threatening legal action against Roy for speaking out. The fifth conversation participant, Pat Marquis, resigned from his VP position this past weekend: “There was some conversation with some pretty violent, like, some pretty demeaning words. I didn’t say much in that conversation, but I didn’t stop it either.”

Marquis called it a life lesson , and it was refreshing to read the following from him:

There’s a lot of boys’ talk and locker room talk that can seem pretty normal at the time, but then when you actually look back at it, it can be offensive. I would never say that kind of thing out in the public but when it was a private conversation I guess it slipped my mind that that’s really not acceptable.

If what Marquis is saying comes from a sincere place, positive results from Roy standing up are already being shown. Still in an ideal world talking about degrading women wouldn’t happen; it also wouldn’t be the norm. Yet, as the online conversation about has Roy shown us, it’s way too normal  to have such conversations about women, and not see it as wrong—even if the woman is a person’s professional peer or even superior. It has become so normal, we don’t even question it until it’s made into a “big deal.”