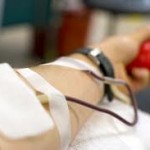 Canadian Blood Services is now accepting blood donations from men who have had sex with men—but only if they haven’t done so in the past five years.

The change took effect July 22, and marks a drastic departure from the organization’s previous policies concerning blood donation from the MSM category of donor, a blanket term used to describe gay men and other males who have, at any point in their lives, had sex with men.

Before the policy change, if a potential male donor had had sex with a man since 1977, he couldn’t give blood. Now, the deferral time is five years—a donor who falls into the  MSM category can give blood if he has had absolutely no sexual contact with another man for at least five years.

This can be interpreted as a step in the right direction. Certainly, Canadian Blood Services would like us to think so. In a press release announcing the change Dr. Dana Devine, VP of Medical, Scientific and Research Affairs at the organization said: “It’s the right thing to do and we are committed to regular review of this policy as additional data emerge and new technologies are implemented.”

In fact, we are still smack dab in the middle of the spectrum—the National Blood Service in the U.K. has a deferral time of one year. In the U.S., if a man has ever had sex with a man he can’t give blood, though the American Red Cross and other U.S. blood donation services have called for a change to 12 months, saying there is no reason why those who fall under the MSM category should be banned from donation while those with similar sexual practices are not.

Canadian Blood Services tests all donated blood for HIV and other transmissible illnesses before it becomes available for transfusion, and HIV testing can detect the virus as early as three weeks after infection—so why the five year deferral?

While these statistics can give pause, they’re still not enough to justify the five-year wait period. The U.K. blood donation service changed its policy to one year in 2011, after a review of blood donor selection criteria determined a lifetime exclusion for men who’ve had sex with men wasn’t medically justifiable.

What’s more, in Canada the deferral time is only one year for those who engage in heterosexual sex with someone who is HIV positive.

Let’s put it this way: if a woman had sex with an HIV positive man, she could potentially give blood 12 months later. In Canada, if a man has had sex with any man, HIV-positive or not, he can’t give blood for five years. That, to put it bluntly, is discrimination, not protection.