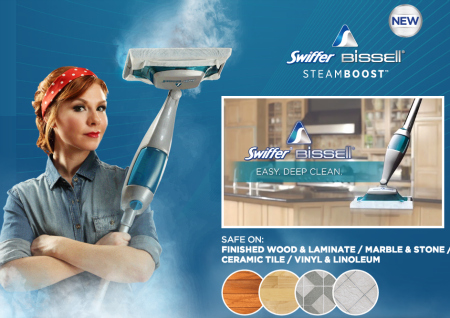 "“We can do it! Because cleaning kitchens is a woman’s work. #swiffer #sexist” Heather Beschizza @hbeschizza

Cleaning commercials have always been crystal clear on whose job it is to keep the family home sparkling. It is a pretty standard formula to show women on the brink of orgasm, dancing over their whites getting their whitest, high on the fumes of the chemicals responsible for their Martha Stewart castles. It’s been a blatantly sexist depiction that consumers have accepted (a problem in and of it’s own.) Swiffer, ever the revolutionaries, took it one step further: Rosie the Riveter is getting back in the kitchen.

The Rosie image became popular during World War II. After the widespread enlistment of men, the American workforce was lacking bodies. Thankfully, someone high up in the American government remembered that lady-people also existed! To get women out of the home and into the factory, a government campaign was released, showing off a hard-working, but still glamorous, woman encouraging us that, “We can do it!” And we did. One in four married women worked outside of the home by 1945.

The symbol lived on in becoming a feminist icon. But alas, it wasn’t good enough to dehumanize the “every day” woman to an obsessive cleaning maniac, Swiffer needed to spit right in the face of this powerful image.

The print advertisements feature a modern day Rosie the Riveter wearing a blue worker’s shirt and red bandana. Her powerful arms are crossed, there is no arm muscle flexing here, because she needs to hold tight to the real power—a Swiffer! The marketing geniuses behind this ad are lucky Rosie hasn’t jumped out and popped ‘em one.

We are aware of the concerns regarding an image in a Swiffer ad. Our core purpose is to make cleaning easier for all consumers, regardless of who is behind the handle of our products. It was not our intention to offend any group with the image, and we are working to make changes to where it is used as quickly as possible.

How did no one, not one person, not think about the blatant offensiveness in this ad? Not one. Who at that marketing meeting was too shy to speak up?

It isn’t wrong to say women clean, it is wrong to say women exclusively do so, or that laundry is what little girls’ dreams are made of. This tells men they are either too stupid to tidy up, or too important. Women are told this is not only their number one job but the most important role of their lives. Few actually enjoy cleaning to that extent. Women, like other people, are tired from the  million other things they have to do and clean more begrudgingly and less like they and their cleaning product are co-stars in a Broadway show.

Shouldn’t women, the demographic behind the purchasing of 80 percent of household products be treated with an ounce of respect, if only so they will be persuaded to put money in your corporate pockets? It makes sense that, according to She-conomy, only three percent of advertising agency creative directors are women. Perhaps we need more ladies applying to Swiffer manufacturer Proctor and Gamble.

Until then, call me a witch, I’m sticking to a broomstick.