Labour rights were in the spotlight this week after a clothing factory in Bangladesh collapsed killing 400 employees—a timely tragedy for International Workers’ Day, or May Day, as it’s known. May 1 is an official holiday in 80 countries (Canada not included) and it’s celebrated with varying degrees of unrest just about everywhere else. May Day’s traditionally big in Europe where strong unions support mass demonstrations. But the movement is growing in developing countries where wages and conditions threaten workers’ lives. And though activism isn’t always our forte, even us North Americans get out to practice our democratic right to protest. Here’s a look at some May Day demonstrations in Canada and beyond. 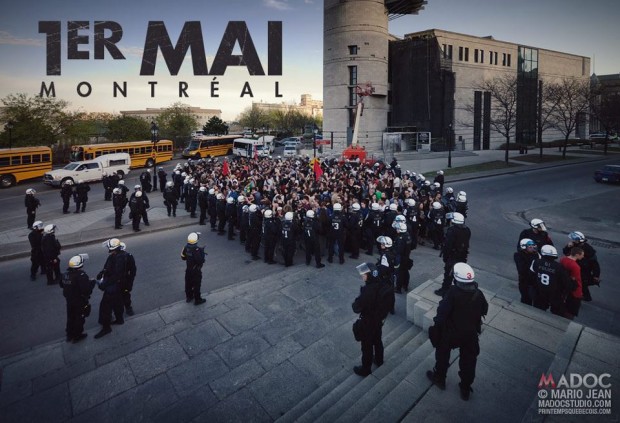 Montreal Anti-Capitalism Convergence rallied demonstrators across from Montreal’s city hall. The group planned to denounce corporate corruption and protest its way to the super fancy, super elite club—357c—the meeting spot that was popular among businessmen and politicians conspiring in the Quebec construction scandal. But police derailed the plan, arresting 447 protesters on the way to the club and slapping them each with a $637 fine for unlawful assembly. Most people were arrested for wearing hoodies, scarves, or masks—violating Quebec’s bylaw P-6.

Outside Loblaw’s on Queen Street, the wrath of at least 1,200 protesters  forced Joe Fresh to shut down early on Wednesday. The company is recently black listed by labour activists for selling garments made in the Bangladesh factory that collapsed last week.

By May Day’s end, just three people were arrested for re-Occupying Alexandria Park, because what’s a protest without police doing their job, right?

Seattle What started as a peaceful demonstration for workers’ and immigration rights turned into a full-on violent feud. Police set off “flash bangs” and pepper sprayed the crowd after protesters pelted cops with rocks and bottles. Seventeen people were arrested. This is the second year in a row Seattle got aggressive on May Day. Last year, protesters smashed the Niketown and American Apparel storefronts. Check out the video of this year’s May Day bedlam. 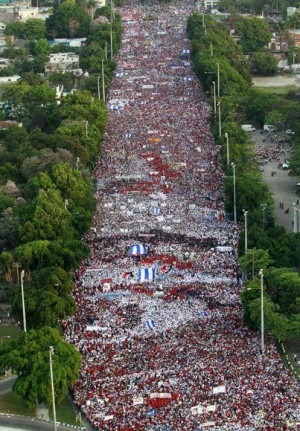 Jakarta Tens of thousands demonstrated in Indonesia’s capital Wednesday. The country is in the midst of an economic boom, growing by about six percent annually. But low income workers aren’t seeing the evidence. Protesters in Jakarta demanded higher minimum wages—a promise the government keeps retracting. Right now, May Day isn’t officially a holiday in Indonesia, but President Susilo Bambang Yudhoyono promised Wednesday that next year it will be. Meanwhile, Minister Dahlan Iskan joined in on the protest, who, by the way, is running for president in 2014—shall we say…politicking?

Dhaka In the Bangladesh city where a clothing factory collapsed last week, and estimated 10,000 protesters demanded the death penalty for the man who owned the building and for those who ran the factory. The Guardian posted this video of the demonstrations:

Istanbul Taksim Square, a massive pedestrian street in Turkey’s cultural capital, is a hub for protest on any given day. But activists of all causes banded together on Wednesday with not so peaceful results. Some busses and ferries were shut down to block more protesters from reaching the square and 22,000 police trolled the streets to maintain order. Check out this video and see how they did: