My roommate has this hilarious—and, uh, brilliant—idea to rid the world of war and conflict: Put all of the world’s leaders in a room full of puppies, she says, and everybody will suddenly get along. Aptly dubbed Puppies For Peace, the program would, she argues, solve all of the world’s problems because, like, PUPPIES!

World peace aside, the idea of putting people in a room with puppies to make them happy and help them relax is awesome, and it’s being done for real at Halifax’s Dalhousie University. 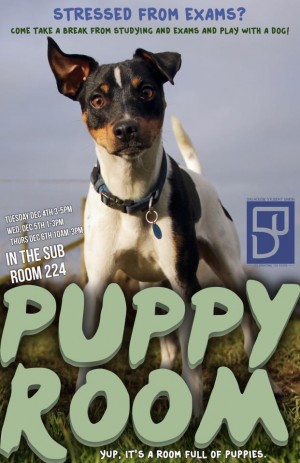 To help students get through final exam/project crunch time, the school’s student union has organized a three-day puppy room. On Dec. 4, 5, and 6, students will be able to—for free—relieve their stress by playing with some sweet little pups.

What makes the program even greater is that it’s done in conjunction with volunteers of Therapeutic Paws of Canada, an animal therapy organization that works to bring cats and dogs to places such as retirement and nursing homes, hospitals, libraries, and, of course, schools. “The medical establishment recognizes the benefits of therapy dog and cat programs,” it says on their website. “Connections with pets helps to calm agitated residents and stimulates wonderful conversations.” In order to be part of the Therapeutic Paws of Canada, animals must be at least one-year-old; a large crowd would be too stressful for the newborn cuties. Still, Dalhousie students can look forward to playing with all sorts of dogs: there’s a Labradoodle, Sheltie, Golden Retriever, Papillon, St. Bernard, and a Dalmatian. Arf!

I can attest first-hand to the power of the pup. When I was going through a bad break-up last April, another roommate happened to be dog sitting for one of her friends, and I ended up spending a good chunk of the weekend with that little white ball of fluff named Ella. It was like she knew I was sad. At one point I was siting on my bed, not really doing much else, and she walked over to me until she was literally standing with her hind legs in my lap and her front paws around my neck. She was giving me a hug! Looking back it was actually kind of surreal. How did she know??? I haven’t seen Ella since then, but I still consider her a pal for life.

And the positive effect of cute animals goes beyond comfort; it can actually help us be more productive, too. A few months ago a study by Japan’s Hiroshima University found that looking at pictures of cute animals could actually make people work harder and improve their concentration (by 10 percent!). Experts believe this is because things that give us happiness or joy actually motivate us, and that includes that adorable video of a puppy attacking a dandelion. SO. KYOOT.

Dalhousie isn’t the first university to bring baby dogs to campus to help de-stress students, though. As the Huffington Post Canada reports, both the University of Ottawa and McGill University have produced similar initiatives. According to the Dalhousie student union Facebook page, their puppy room idea came from a student who suggested it to their soapbox—an online forum where students can suggest ideas and voice their opinions. That in itself is a really great idea. So, all in all, it seems like Dalhousie is doing some really awesome things, and that’s, well, awesome.

You know what else is awesome? This sleepy puppy right here. *Number of cute images I looked at while writing this post: at least five. This puppy playing with a lemon is particularly cute.

Now get back to work!