On Tuesday, the UN agreed to set some standards on the 70 billion dollar arms trade. Right now, weapons-trading is an unregulated business, where illicit dealing gets lost in the same grey market as government trading. But with the first ever global arms trade treaty (ATT), that’s about to change.

Theoretically, the treaty will stop the free-flow of weapons to human rights abusers, with hopes of reducing the number of people (about 2,000) who die every day from arms violence. 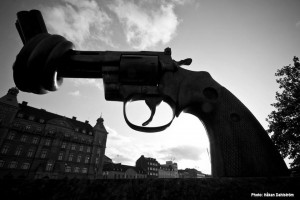 The ATT is a huge victory for human rights groups Oxfam and Amnesty International, which, for the past two decades, have been lobbying for arms regulation. Desperately, they’ve been feeding us stats such as, “every year, we produce two bullets for every person on the planet”, and “bananas and MP3s are more tightly regulated by international laws than weapons”.

The push for regulation really gained momentum in 2003 when a group of Nobel Peace Laureates backed the effort.

So when 154 of 193 UN states voted yes for the treaty, benevolent leaders and humanitarians everywhere rejoiced. Amnesty tweeted (after a series of anticipatory updates): “We did it! 20 years of work for the Global #ArmsTready pays off.”

For sure regulating the deadliest business in the world is a good thing, but first, a few factors have to line up.

Before the treaty is even ratified, 50 countries have to pass legislation in their own states agreeing to play by the rules.

The other problem, as you may have guessed, is that some of the top weapons exporters aren’t interested in regulating the trade. China and Russia, both among the “big six” arms exporters, didn’t show up to vote. We can bet neither will adopt the treaty, which is bad news, seeing as both are big dealers to the bloodiest conflicts in recent history. Russia, for example, is the top supplier to Syria, where anywhere from 62,000 to 120,000 have been killed in conflict since March 2011.

The idea, though, is that the arms trade treaty would prevent future disasters like Syria. That is, if all goes as planned.

At this point, exactly how the UN will keep weapons away from corruption is vague. The rules state that governments can’t ship arms if there’s a “substantial risk” of human rights violations or if shipment would provoke instability, hamper development, or support organized crime or terrorism. Governments will report details of their weapons trading to an “implementation support unit”—a watchdog of sorts—meant to keep governments in check via … penalties? fines? The enforcement method is yet (if ever) to be defined.

Although I’m not as optimistic as many treaty advocates, I won’t say the ATT is completely useless—it’s not. By documenting how governments trade arms—to whom and how many—we can red flag weapons that make their way to war lords. It creates boundaries between the black market and legitimate trading, which is essential for catching illicit dealers.

Sure the treaty is riddled with loopholes, but it sets international standards. Violating the standards could shame a country, hurt their reputation, and ostracize them from the global community. Is the treaty enough to stop genocide and instability? No. But it’s more than we’ve ever had.