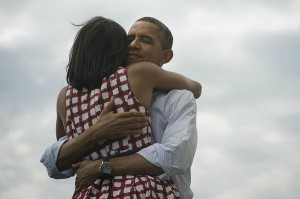 American politics have always been of serious interest for Canadians. Not only does the American President affect Canadian politics and procedures, but American elections are also just a heck of a lot more interesting to watch than our own. There’s something incredibly exciting about sitting around with your friends and watching the votes come in, as Wolf Blitzer and his associates furiously tap screens that zoom in and out on the states (CNN went very high-tech this year). Last night’s Barack Obama vs. Mitt Romney battle was no exception—and as always, in and amongst the surging patriotism and mountains of hope, there was absurdity. Here, we bring you some of the election’s biggest WTFs.

1.)  Mitt Romney, on election day, tells reporters he only wrote a victory speech. That worked out well.

2.)  Mitt Romney takes forever to concede, finally addressing the public early this morning. He was scrambling to write his defeat speech, okay?

3.)  Donald Trump calls for a revolution when Obama wins. Tweeting things like, “We can’t let this happen. We should march on Washington and stop this travesty. Our nation is totally divided!” and, “This election is a total sham and a travesty. We are not a democracy!” business mogul Trump made it pretty clear that he was upset with the night’s results. Some tweets were deleted, including the outrageous, “More votes equals a loss…revolution!” Trump’s strong dislike for Obama is no secret (remember when he insisted that the President wasn’t American?), but this is ridiculous. What exactly is Trump hoping to gain? Being upset with the election’s outcome is one thing; deciding that it’s proof of an unjust system (and thus cause for revolution) is entirely another. At least NBC’s Brian Williams commented on its preposterousness.

4.)  Karl Rove says calling Obama’s victory in Ohio is premature. Even as CNN, CBS, ABC, NBC, and even the Conservative Fox News said the state was Obama’s, Romney advisor Rove said, in an interview with Fox, that with 991 (20 percent) of the state’s votes still uncounted, it was too soon to know. This caused anchor Megyn Kelly to address the network’s number crunchers directly and find out if they, given Rove’s assessment, stood by their projection. They did. And, turns out, they were right. Woo!

5.)  Richard Noyes alleges that the liberal media was biased against Romney. The Media Research Centre’s Research Director Noyes wrote an editorial, published today by Fox News, which listed five reasons why this supposed bias was a major cause in Romney’s loss. Among them were accusations that the liberal media defended biased debate moderators (who were in favour of Obama), tried to hide the truth about America’s poor economy, and attacked “Republicans as liars for statements that were accurate.” If I’ve learned one thing in journalism school, it’s that no media establishment is completely without bias—it’s literally impossible to be 100 percent neutral, in any circumstance—and that goes for both political camps. Also, Noyes should give America more credit than that: it’s a smart country, and its people can tell when they’re being fed nonsense. Plus, the media is an overly used and very easy target when pointing the finger. Why is only the liberal media to blame?

7.)  People think Justin Bieber is American and urge him to vote. This caused the Canadian (HUZZAH!) pop prince to take to Twitter, saying, “im 18…but i cant vote…im Canadian.” Sorry to crush the hearts of 14-year-old girls everywhere else, but he’s ours.

8.)  Obama beats Justin Bieber for the most retweeted post on Twitter of all time. Shattering Bieber’s record of over 220,000, Obama’s “Four more years.” tweet (featuring a heartwarming photo of Mr. and Mrs. Obama in a sweet embrace) has been retweeted over 680,000 times. Confession: this is actually a total FTW. Obama FTW!