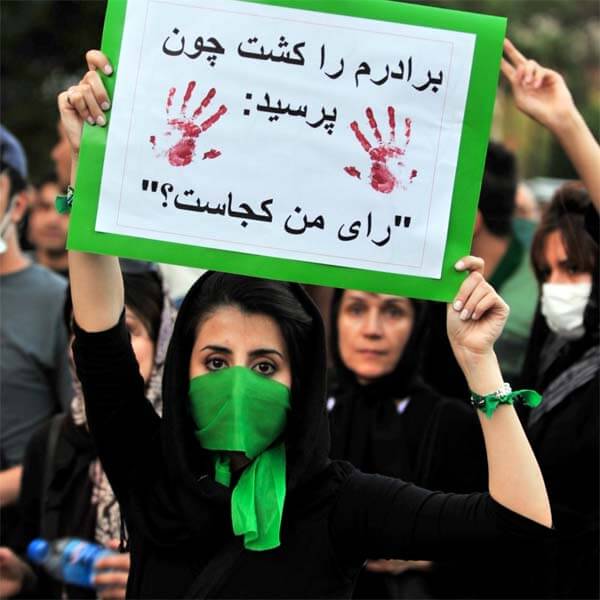 A protester on the streets of Iran, June 17, 2009. The sign reads "They Killed My Bro Koz He Asked "Where's My Vote." Creative Commons photo by Hamed Saber.

Not really. One victim became a world icon, while the other barely registered on the books of the international media. Such are the divergent post-mortem fates of Neda Agha Soltan and Zeina al-Miri. The former was shot in the streets of Tehran during post-election disturbances in June. Her story made headlines, and her name became the household kind for those who follow world news. The latter was shot in the streets of Beirut barely a week later, after clashes between supporters of two of Lebanon’s political factions following parliamentary elections. Locals barely remember her name.

Al-Miri’s anonymity is not unique. Videos of Israeli soldiers shooting unarmed pro-Palestinian protesters, in some cases fatally, surface regularly on the internet. North American mainstream media is hardly moved or concerned. Israel is on the good books of Western governments—those who demonstrate against its policies cannot be pro-democracy activists. Not so for Iran, where any opposition to the theocratic regime is cheered on, even if it is backed and led by the mullahs themselves.

The coverage of the Iranian crisis was a lot more than another case of double standards. It was a missed opportunity to understand the political dynamics at work in Iran after decades of bias and demonization of that country. It was also a missed opportunity to create genuine links of solidarity with the Iranian people that outlive the euphoria of mass street action. But instead of understanding, with a few exceptions, we got sensationalism. Instead of grassroots, long-term solidarity, we got sensational vows of support and government-driven initiatives of interference.

During Iran’s disturbances, the social networking site Twitter famously went so far as to move a planned maintenance blackout to correspond with nighttime in Iran, at the request of the U.S. State Department. Researchers at the University of Toronto who had developed an online censorship avoidance tool jumped into the fray and urged Iranian activists to use it to reach websites banned by the Iranian government.

Where did all these efforts go when Israel banned all journalists from entering Gaza during its bombardment of the strip last January?

Instantaneous solidarity with ordinary Iranians seeped all the way to the higher echelons of power. North American and European heads of state, the same ones whose countries have imposed sanctions and waged proxy wars on the Iranian people for decades, were suddenly touched by the fate of Neda and felt compelled to express their support. Dozens of protestors killed in China or Honduras or Yemen around the same time simply did not tickle the right solidarity glands. When the Iranian protests started dying out, the voice of cold realism, The Economist, wondered whether the “dream” was over.

Whose dream of change was it, anyway? Shouldn’t it have been the Iranians’? The highly romanticized and superficial coverage of events exposed two key things. First, a deep-seated belief that Iran wants to be “just like us”—democratic, liberal, civilized—and that a shadowy force called the Islamic revolution is stopping it (the fact that Islamic rhetoric dominated both sides in Iran’s conflict seemed to fly right above the heads of North American and European media analysts).

Second, the coverage demonstrated the continued, powerful influence of Western governments and political elites over the tenor and content of news from foreign countries. Without a serious overhaul of how this coverage is conducted, North Americans will continue to receive a largely skewed and one-sided portrayal of events, one where pro-Western forces of good are battling anti-Western forces of evil. You would hope this cartoon notion had been demolished along with George W. Bush’s silly decree that “you’re either with us or against us.”

Around the same time, Bush’s successor, President Barack Obama, remained conspicuously vague on the question of a possible strike by the Middle East’s only nuclear power, Israel, on alleged Iranian nuclear facilities. Such a strike would spark another conflagration in the Middle East, and the security repercussions would be felt worldwide.

Shouldn’t Western mainstream media be just as worried about that scenario? And in light of such possible escalations, shouldn’t that drive them to make better sense of what happened in Iran? Crucial questions are going unasked: What is the long-term impact of the Iranian crisis on the nuclear file? Who are the power groups mobilizing both camps? Why did the protests fizzle out the way they did? How can an influential man like Iranian politician Ali Akbar Hashemi-Rafsanjani, accused of corruption, be leading a “democratic” movement of change?

Even if media outlets wished to make better sense of events affecting millions of people, they would have had little airtime or space to discuss these secondary matters at hand. After all, the King of Pop had died.