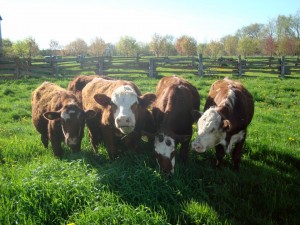 Ian McCormick is one of the new generation of Canadian farmers.  Thanks to programs like FarmStart and CRAFT (Canadian Regional Alliance for Farmer Training), new farmers — young people and folks who often didn’t grow up farming — are trying their hand at small-scale production.  FarmStart helps develop a new generation of farmers by leasing small parcels of land and facilitating training.  CRAFT is a well-developed network of Ontario organic farms that offer comprehensive internships to aspiring farmers.

McCormick has been raising grass-fed beef cattle for just three seasons in southern Ontario, and is now looking after a small herd of 18 cattle that he keeps on host farms.  He’s also finishing a Masters of Science at the University of Guelph, having completed a BSc in Environmental Biology at Queen’s.  He’s 26.

So why did he start farming?  “Environmental studies can be a bit of a downer at times,” he explains.  “A lot of the jobs I was looking at after school were in the consulting world and involved telling people what they could not do.”

I asked McCormick if he could weigh in on the Alberta beef recall from his perspective as a newbie beef producer.  “The recall is obviously big and sad news for beef farmers.  I expect there will be some herd liquidations going on as people try and get out of cattle. Beef cattle make little money in a good year, in a bad year you lose quite a bit.”

When asked whether small beef farmers are immune to the XL-type disasters, McCormick replied:  “E. coli 157 and other pathogens don’t discriminate between big processors and small processors. No food is 100 percent safe from contamination, whether it be carrots, lettuce, pork or beef.  That being said, small-scale farming and processing significantly lowers the risks.”

So what’s the difference?  “When you have a plant like XL that’s processing thousands [4,000] of cattle a day all it takes is for one animal to be sick or infected and you can contaminate all the beef processed with the same knives and other tools.”  At a small abattoir, though, the smaller volume of meat allows inspectors to be so thorough they can examine each side of beef, McCormick explains.  Furthermore, small abattoirs are usually family run, says McCormick, so “maintaining quality is crucial and failing to do so could ruin the family business.”

Even with his own small herd, McCormick has had a tough year.  “My experience with the drought this year has been painful. The pasture’s produced half as much grass as last year so I had to feed more hay (dried grass). As you can imagine everyone was doing this so the hay price more than doubled. Just when everything looked like it was going to calm down we get the news from XL.”

Would he like to be a full-time farmer?  Well, yes, but he explains “that’s a hard reality to achieve in your twenties unless you are born into it or win the lottery.”  In the meantime, McCormick is going to finish up his masters in soil science and keep working as the start-up farm coordinator at FarmStart until he can meet his 10-year goal of working as a full-time, self-sustaining farmer.

Recent news suggests that the XL plant is set to reopen Monday, under the new management of Brazilian-based JBS USA and under the watchful eye of the Canadian Food Inspection Agency.  Fully  2,000 employees were laid off in September and it is unclear how many will be rehired. Tragically,  in one load 500 to 600 tonnes of beef — wasted animal lives — were sent to a local landfill as a result of the recall, with more to come.

For more on beef, check out my last post, “A rare treat: The perks of local beef.”