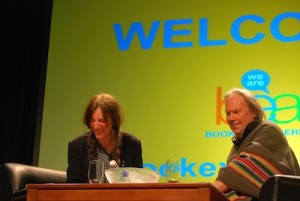 If you enjoy seeing authors paraded around like show ponies, visit Book Expo America, the annual publishing tradeshow taking place this week at the Javits Center in New York City. Just as celebrity memoirs and how-to books dominate bestsellers lists, the longest lineups I saw at the show were not for big-name authors (and they’re there: Joyce Carole Oates, Richard Ford, Zadie Smith), but for toothy TV stars like Rachael Ray, who was there schilling a burger cookbook. I admit I’m not immune to the celebrity allure—I tracked down Project Runway’s Tim Gunn and spent way too long at the Guinness Book of World Records booth where two towering Harlem Globetrotters wooed the crowds with their ball-spinning skills.

Occasionally though, art does intersect with celebrity. BEA scored a big one this year by inviting the iconic Patti Smith to interview fellow music legend, Neil Young, who has a memoir, ‪Waging Heavy Peace‬, coming out this fall. I admit I was worried as I sat down in the packed room of publishing industry people. What if this turned out to be a case of kill your idols? I’ve been a huge fan of Smith’s since I learned how to properly lace up my Docs, and Young, well, that’s like holding court with the King of Canada.

In rock style, the event started 20 minutes late. But as soon Smith stepped out wearing braids and Young a striped wooly poncho, I was a goner. Smith—whose own memoir, Just Kids, was a critical success—was a warm and engaging interviewer with a heart-melting giggle, who effortlessly guided the conversation from music (the story behind the writing of “Ohio” was chilling, even though it involved “smoking weed and grooving”) to Young’s disdain for digital technology and engineering (“it’s like reducing Picasso to wallpaper”) to trains (both are fans; Young is a stakeholder in Lionel, a classic toy train company).

One of the most touching moments was when Smith relayed a question from her own daughter about whether Young felt connected to his father—who was a sportswriter and novelist—when writing. Young revealed that his father called him “Windy because I talked all the time,” and waxed nostalgic about his father’s old Underwood typewriter.

Near the end of the hour-long talk, Smith articulated what she believes to be the connections between their memoirs, and what I think sets them apart from the glut of Bieber-esque books on the market. Smith said: “Our books are very different, but I think there’s something about them that’s similar. Neither was written vindictively or to settle a score. Both were written humanistically.”

Young took a second and mused: “I think they actually are quite similar. I’m a highway and landscapes. You’re a city and bricks, lots of bricks, painted bricks and lots of people. I’m travelling and you are, too, but I’m on the prairie highways and you’re travelling down streets. We’re on similar paths but different geographic places.”