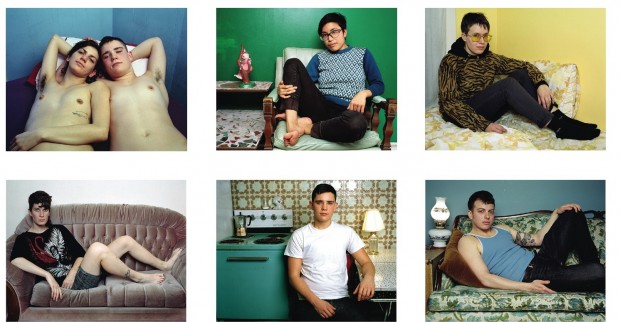 The fate of JJ Levine’s unconventional hair salon, Lesbian Haircuts for Anyone was in jeopardy this past winter. Levine’s salon has operated out of Bikurious cycle shop in Montreal for the past six years. In 2008, Bikurious owner Danielle Flowers sold the shop, which was then called Révolution Montréal, to two of her employees, on the condition that Levine could continue cutting hair out of the space indefinitely without paying rent. Unfortunately, indefinitely turned out to be a matter of years.

After being approached about being charged for the space, Levine moved out. “The agreement was made as a means of acknowledging the immeasurable contribution I made to the store over the previous years,” Levine says, “and that I would continue to make by giving the store a caché, and by helping to maintain the feel of a queer community space.”

Levine has now teamed up with bow tie design label GrannyB. The latest incarnation of Lesbian Haircuts For Anyone operates out of GrannyB’s sewing workshop in a storefront on Ontario and St. Christophe, three blocks closer to downtown Montreal than the previous location. “I’m so happy to be able to continue my project in the same neighbourhood and in a space where I feel comfortable and my clients feel welcome,” Levine says.

Levine (who prefers the pronoun “they”) assures that their lesbian haircuts are for anyone and everyone—queer, transgender, gay, lesbian or straight. But despite the queer connotations of the hair salon, Levine is more interested in focusing on a queer lens in art.

When not snipping and clipping, Levine is a portrait photographer whose work focuses on marginalized expressions of gender and sexuality. Levine—who has a BFA in Photography and Interdisciplinary Studies in Sexuality from Concordia University—has exhibited nationally and internationally at artist-run centres, commercial galleries, art festivals and academic conferences. In June during Toronto’s Pride Festival, Levine’s work will appear in the annual 10×10 photography exhibition of LGBT community portraits.

The diverse relationships surrounding urban Montreal queers is of particular interest to the artist. “I think the way that queerness and community interact in our lives is so important,” says Levine, who cites friendship and Montreal’s queer community as a deep source of inspiration for their ongoing series, “Queer Portraits,” an intimate look at friends, lovers and siblings. Levine’s subjects look intensely at the camera, their gaze intentional and pose purposeful.

“As a queer artist whose work deals with self-representation, the categories queer and art are inextricably linked for me,” Levine says. “My work is so connected to my queer identity that my own gender and sexuality influence every aspect of my art practice.”