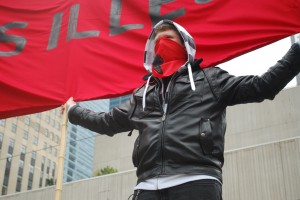 More than 1,500 people gathered at Nathan Phillips Square yesterday to rally and march down Queen Street for May Day—and to rejuvenate the Occupy movement . The co-event was organized as part of International Workers’ Day, in a joint effort between No One Is Illegal, Occupy Toronto and the May 1 movement, which is a coalition of organizations from around the city.

I arrive at the predetermined location at 3:30 p.m., about a half hour before the event was slated to start. (I am habitually early to just about everything.) When I get there, there are only a few small clusters of yellow clad police officers standing and waiting; others circle the premises on their bikes. Major news networks are parked out front. Camera crews wander aimlessly around the vacant demonstration area. A women who appears to be a regular tourist, snaps pictures while other pedestrians carry on with their own business.

As it turns out, the tranquil and quite nature of the square is really the calm before the storm.

Patiently waiting for things to kick start, I find myself seated next to a woman and her young child. The young mother, named Angie, is holding a small homemade sign: WE ARE WORKERS, NOT COMMODITIES. “As workers we are people and we should be compassionate towards each other,” says Angie. “People should care about making sure everyone has enough to eat, everyone has enough resources, where as commodities are just things. I mean when you are just a little number on the balance sheet in the cost section, who cares about that?”

As the minutes slipped toward 4 p.m., more and more people began to gather in the front of the square. These ever growing factions, I think, may be a sign of the growing awareness of the issues at hand. I begin to notice more flags, and a growth in the number of signs poking out of the crowd. There is a young man moving along the walking bridge writing “CAPITALISM WORKS FOR THE RICH”, with chalk. 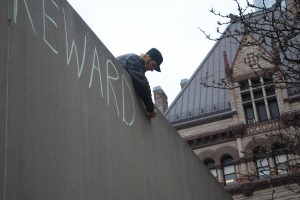 A man writes out a message in chalk for the entire crowd.

I hear a faint drumming off in the distance. This sparks a kind of energy within the growing crowd: Something is about to take off.

Not long after the arrival of the drummers, No One Is Illegal sweeps in with a sea of black and red. A massive roar rips through the square. It has begun.

The goal of the event is to join in solidarity with people throughout the world in a fight to draw attention to the problems within our society. Workers rights for undocumented workers, documented workers, migrant labours, for refugees, for people who are out of work and looking for work, and those who are under employed—to name a few. 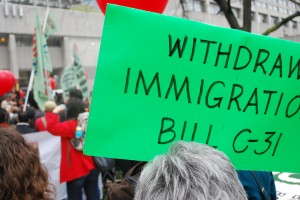 One of the many signs seen throughout the square.

At about 4:30 p.m, people begin to step up to the generated powered mike to address the crowd. Each speaker represents a different group involved with the movement, but every message centres on the same demand: a need for change. The engaged crowd listens contently, then joins in with various, rotating chants including, “Harper is a criminal, Kenney is a criminal and Ford is a criminal.”

A middle aged man named Armando makes his way through the crowd with his bike in order to gain a better vantage point of the speakers. He wears a red bandana around his neck in support of No One Is Illegal. “This is a very important historic day,” says Armando. “So it’s good to share in the movement that started last year and today maybe is going to restart Occupy Toronto.”

A similar sentiment is prevalent with many of the demonstrators. Katie Berger, who works with Occupy Toronto, is excited about the group’s direction. “We’ve been super active over the winter. Just not so much visible.” Since the group ended their occupation of St. James Park in late November of last year, a great deal of planning and education has been taking place. “This was part of the direction we wanted to take,” says Berger. “A lot of people involved in the occupy movement are very new to activism and one of our goals is to unite and learn from the people who have been doing this and working for these struggles for years.”

Berger was not involved in the planning around the initial occupation.  She believes this time around they are better prepared. “We really took this time to regroup and try to outreach to more people and look within our own group and figure things out.”

With the closing of the rally the hundreds strong crowd took to Queen Street for a march to Alexandria Park for a cultural celebration led by a small group of indigenous peoples. Police lined the middle of the street separating the crowd from the disrupted rush hour traffic. Onlookers stood in awe of the massive crowd flowing through the downtown, chanting dozens of different messages. 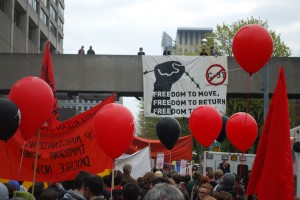 Following the cultural celebration, Occupy Toronto set out to their final location for a 24-hour reoccupation of Simcoe Park.  Occupy intends to start 24-hour occupation at various locations throughout the city.

Prior to heading to the demonstration yesterday I was reading “Among the Rebels”, by Lia Grainger in the most recent issue of This Magazine. I came across a quote that made sense when looking back at the event yesterday and where this movement is going. The quote read,“Action. Reflection. Action.”

We have now reached the point of action. Like most movements everything takes time, nothing happens over night. We learn from history and therefore we can engage the future better prepared. I think that is where we are headed this summer. People are taking the lessons they acquired and implementing better tactics with a more focused cause. The cause is still not perfectly drawn out yet, but I’m sure it’s waiting to erupt and when it does, more people will grab hold, not because they are band wagon jumpers, but because they finally see themselves in the movement. A cause, a concise cause can bring more people together.

This should be the focus. In order to gain public support, I think, you need to appeal to them, find the common link. If they can see the direct impact on their own lives it’s only a matter of time before the movement is full blown and the governments, banks, or whoever it may be, will have no choice but to listen.