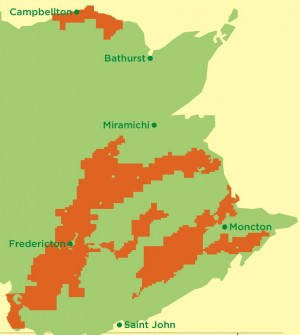 When the New Brunswick government granted Southwestern Energy its first natural gas exploration permit in March 2010 hundreds of angry citizens set up blockades and held rallies on the lawn of the Legislative Assembly. Two years later, the debate is just as explosive. In fact, a survey released in December by Corporate Research Associates shows a province in complete divide. Of the 400 New Brunswickers surveyed, 45 per cent are in favour of natural gas exploration, and 45 per cent are opposed. The remaining 10 per cent are not sure what the government should do.

The New Brunswick government, meanwhile, continues to heavily support the industry. There are already 71 oil and natural gas agreements in place, spread between nine companies who pay rental fees totalling more than $1 million annually for their piece of the more than 1.4 million hectares allocated for exploration. The government predicts annual royalties will reach $225 million once the wells are fully functional – and the province’s proximity to the United States suggests promise for exportation. All that, it argues, will help pay for numerous social programs and to create new jobs in side industries from construction to accounting—a persuasive argument considering the December 2011 unemployment rate of 9.4 percent.

No, we need to know more about what fracking can do to the environment

In December, the New Brunswick government voted to move forward with “responsible” and regulated development of natural gas. It did little to dampen the furor. That same month, the U.S. Environmental Protection Agency released a high-profile report that found hydraulic fracking had severely contaminated water at an Encana company site in Wyoming. While the Calgary-based natural gas giant has angrily disputed the findings, the study cast even deeper doubt on whether the industry was being properly regulated—or honest about fracking’s potential to damage the environment.

Currently, about five per cent of natural gas wells in Alberta are leaking—and there is potential that number could grow to 15 percent in the coming years. This has convinced many anti-fracking advocates that more non-industry research is vital before the province reaches a full boom. As program coordinator for the Shale Gas Alert Campaign, Stephanie Merrill educates New Brunswickers about the industry’s dangers. There are guaranteed negative effects, she says, such as rural industrialization and threatened water sustainability. But there are also risks: contamination of drinking and ground water,  respiratory illness—it’s hard to say how far the list goes on without the right research. “We really need to know a lot more,” says Merrill. “We’re not willing … to be the guinea pigs for this experiment.”