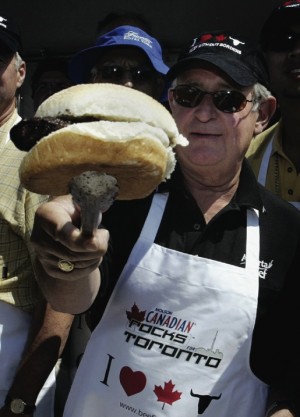 When the first Canadian case of Mad Cow disease was discovered near Wanham, Alberta in 2003, sensationalist news coverage sparked widespread fear over the safety of Canadian beef. Forty-one countries closed their borders to our beef, and in the following 18 months producers suffered $5 billion in losses. To date, only 19 cases of mad cow have been discovered in Canada; the most recent was in February 2011. By then, Canadian beef exports had dropped to approximately $1.42-billion from the pre-crisis approximately $2.14-billion high. Cattle ranchers in Alberta were hit hardest. “For every outfit that expanded in that period of time,” says Alberta cattle producer Travis Toews, “three or four others have shut down.” Were they victims of overreaction?

Certainly, Mad Cow, or Bovine Spongiform Encephalopathy (BSE), comes with some scary symptoms: nervous or aggressive behaviour, difficulty walking and eventually an inability to stand.  In humans the disease appears as variant Creutzfeldt-Jakob Disease (vCJD) with similar symptoms. Although vCJD is linked to ingestion of disease-carrying cow parts (brain, spinal cord, and nerves), there has only been one confirmed case of vCJD in Canada — and that individual was likely infected in the U.K. Even so, the organs were banned from the human food chain in 2003. Four years later, the federal government also banned at-risk parts from animal feed, pet foods, and fertilizers.

The move was a cause for debate within the industry, says John Masswohl, director of government and international relations for the Canadian Cattlemen’s Association. What was once a source of income is now a disposal cost. “It’s something that we felt that we needed to do to gain recognition at the international level that we are controlling this disease,” says Masswohl, “By enhancing the feed ban, we can eliminate the number of years until we can declare we’ve virtually eradicated BSE.”

This is key to the industry’s survival: 50 percent of Canada’s beef is produced for export, and 76 percent of beef and 99 percent of live cattle exports go to the United States. “When things are good in the U.S.,” says Masswohl, “They’re good here.” Of course, it helps if they’re good elsewhere, too.

“It was a very significant disruption that we faced,” says then Minister of Agriculture Andy Mitchell. Most countries have reopened their borders to Canadian beef since Mitchell’s time, but not all: Japan, China, Taiwan, Mexico, and South Korea remain restricted. South Korea imported $60-million worth of beef in 2002, but nothing since 2003. While extensive trade talks have resulted in a promise to reopen South Korean borders this year, as Mitchell says: “There is still some ways to go.”