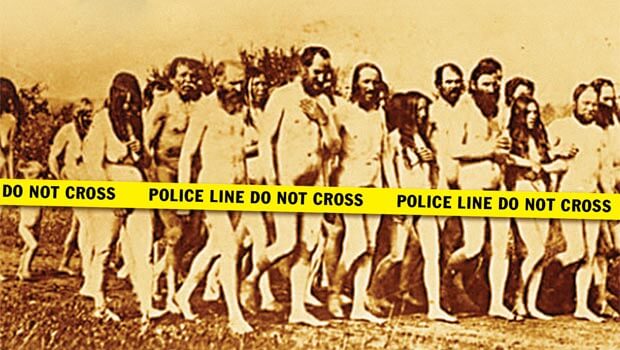 Doukhobors stage a mass nude protest in Langham, Saskatchewan, in 1903.

In Canada, public nudity is allowed so long as you don’t “offend against public decency or order.” In fact, nudity is considered a political crime, one of the few offences that requires the Attorney General’s approval to lay charges. So, letting it all hang out among thousands of like-minded souls at the Pride Parade? You’re probably safe. But going for a naked jaunt to your local A&W—not so much. Brian Coldin, of Bracebridge, Ontario, currently faces five charges for his repeated clothing-free visits to fast-food restaurants located near his naturist resort. Coldin is fighting the charges, calling Canada’s nudity laws unconstitutional. A judge is expected to rule this fall. Until then, here’s a full-frontal look at our country’s long history of public nudity.

1931 The Criminal Code first defines nudity as an offence in response to mass nude anti-conscription protests by radical Doukhobors, a Russian pacifist religious sect. The following year, 118 Doukhobors are arrested and sentenced to three years each for their naked protest.

1939 The Van Tan Club is founded in Vancouver by Ray Connett, the self-dubbed “Father of Canadian Nudism.” Today, it’s the oldest nudist club in Canada.

1947 The Canadian Sunbathing Association is formed. This and similar euphemisms are employed to make advertisements acceptable to newspaper and magazine publishers.

1953-54 The Criminal Code is amended to remove Doukhobor-related “parading” references. Criminal charges remain rare, however, as Attorneys General prove reluctant to prosecute. Those going clothing-free are instead usually charged with mischief or indecency.

1991 Gwen Jacob, 19, takes off her shirt in Guelph, Ontario, and is charged with indecent exposure and fined $75. In a recent interview with The Naturist Living Show, Jacob reflected on the episode: “With my hands shaking furiously, I took my shirt off and jammed it down the back of my shorts and I can’t tell you the freedom that entailed in that moment … I was scared to death, but there was a nearly euphoric sense of taking control of my own body.”

1996 The Ontario Court of Appeal rules that Jacob’s “indecent exhibition” did not pose a “risk of harm” as defined by the Supreme Court of Canada and therefore could not be the subject of criminal charges. The conviction is overturned and Jacob gets her 75 bucks back.

1998 Evangeline Godron swims topless in a Regina pool. After she declines to either leave or put on a top, police are called and she is charged. Godron is convicted of mischief a year later, and subsequent appeals are thrown out.

2011 Brian Coldin challenges the constitutionality of Canada’s nudity laws. His case is pending.