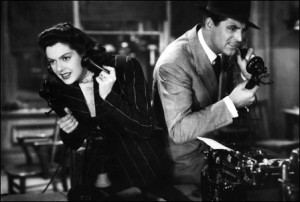 Rosalind Russell and Cary Grant in 'His Girl Friday'. Newsrooms still have a long way to go toward achieving gender equity.

[Editor’s note: On a semi-regular basis, we survey a sample of recent back issues of This to analyze the topics we cover, how truly national our scope is, and the makeup of our contributor roster.  See the last survey here.]

The new documentary Page One focuses on the state of journalism, its new technologies and decreasing revenues. And if you look closely, the trailer also reveals the struggling industry’s sweeping bias. The reporters and editors interviewed at the New York Times are mostly men (and they’re all white):

It’s old news that American print media is running a deficit on female contributors. Last year Elissa Strauss conducted a survey of major magazines in the U.S. The New Yorker had 27 percent female bylines. The Atlantic, 26 percent. Harper’s Magazine, 21 percent. And that’s just to name a few. You can view a more extensive list by VIDA here. And last February, CBC Radio followed up on the story, interviewing Canadian magazine editors about the same problem north of the border.

So when my editor asked me to survey a year’s worth of This magazines, I jumped at the chance to uncover our biases. Where did our stories take place? What topics did we write about? How many of our writers, and their sources, were female versus male? The results surprised me.

My survey may not be 100 percent replicable at home. You can view the whole spreadsheet on Google Docs here, or download it as a CSV file. And you can check out the previous year’s stats (which tracked geography and topics, but didn’t track gender).

I kept track of every article that had a byline. I assigned each of these a location (e.g. Vancouver) and a general topic (e.g. environment). I also noted each contributor’s name and gender*. Then I took note of every person who was quoted. I chose to do this because a direct quote conveys the person’s voice to the reader. I also took note of each source’s gender. Quoted sources are very often referred to as “him” or “her” in an article. When they weren’t, I asked the writer or Googled names to find out.

As I surveyed the first magazine, an unexpected trend emerged. There seemed to be far more male sources than female sources. So I retraced my steps and added each source’s profession, title or expertise. I kept it up, hoping this would give me more insight if the trend continued.

We haven’t changed much since last year in terms of geographic distribution. Ontario, particularly Toronto, appeared frequently (though we haven’t determined yet whether it’s disproportionate to Canada’s population). British Columbia, with particular emphasis on Vancouver, was a close second. This year it was the Yukon, Nunavut and PEI that went unmentioned (last year, it was New Brunswick that was non-existent between our purportedly national pages).

When it comes to our favourite topic, the environment is still number one. We also love technology and politics, as per the usual. Freelancers take note: we didn’t have nearly as many stories about racism or homophobia in this sample as we do about women’s rights. Transphobia was invisible between our pages.

This Magazine is a lefty indie not-for-profit with a male editor and female publisher, and our bylines are also pretty egalitarian: 53 percent of bylines over the year were female (76 out of 142). Compared to the male byline bias in the mainstream media, This Magazine constitutes a fair counterpoint.

However, when it comes to sources we’re not doing so well. Only 72 out of 256 sources quoted were female. That’s 28 percent. Suddenly we look a whole lot like those other magazines I mentioned. Are our writers biased, or are the numbers reflective of the status of women?

Both. Male writers were less likely to quote female sources (22 percent of sources quoted in their articles were female). By contrast, sources quoted by women were 33 percent female. This disparity suggests that credible, accessible, female sources exist—but men aren’t quoting them. Another factor could be that men tended to write more for our technology issue (13 out of 23 bylines), which acknowledged a lack of women experts in the field. Conversely the most female bylines (17 out of 23) could be found in “Voting Reform is a Feminist Issue.”

If our journalists are quoting people of the same gender as themselves and over half our bylines are female, shouldn’t we have a more even split of sources? Sadly it doesn’t appear that personal bias plays a strong enough role to account for the disparity. I have to conclude that the lack of females quoted reflects the status of women in society.

Think about it. Journalists quote people who hold positions of authority. As I read down the list of sources’ titles, I can say pretty confidently that our reporters interviewed the right people. Some of their sources are politicians, CEOs, judges, police officers, people of high military rank. In Canada, these positions are occupied by men and women—but women are decidedly the minority in those cases. In 2007, according to the Status of Women in Canada, 35 percent of those employed in managerial positions were women. According to a one-week old worldwide survey by the new UN agency for women, 44 percent of Canadian judges are female. Only 18 percent of law enforcement workers are female, says a 2006 StatsCan report. According to StatsCan the Department of National Defense, only 15 percent of Canadian Military personnel were female. It’s no wonder that our feature on Canada’s involvement in Afghanistan quoted no female military sources, and that our reporters interviewed few females involved in law when researching our “Legalize Everything” issue.

The best thing journalists can do to eradicate bias is to be aware of it, which is why we do this kind of analysis in the first place. Without this first step, we can’t ever hope to challenge our points of view. Acknowledging bias includes direct and indirect bias. The first type includes journalistic and editorial perspectives. The second type includes structures that perpetuate the unequal status of women, such as advertising bias, media ownership, and hiring practices in the wider world. So although it’s a great start, seeking out female sources in law enforcement, engineering, politics and technology is not going to cure the gender gap. Those in positions of power must attempt to correct gender, race, sexual orientation and class biases when they hire and promote workers. Voting reform would help, too.

Don’t lose heart — there are also positive signs in the numbers. The equality of male-to-female bylines and the greater female tendency to write without using as many direct quotes (often considered a sign of reportorial confidence among journalists) challenges Strauss’ guess that women may be meek or passionless about politics and critical journalism. For a magazine with the slogan “everything is political,” this is simply not true. It could, however, still be correct for the magazines Strauss surveyed. After reading a year’s worth of This, I can safely say our writers (female and male) are unapologetically critical in their approach — and nowhere near shy.

We want to do better in terms of bias, and we welcome any and all suggestions on how to improve our coverage of underrepresented topics, locations and communities.

*I don’t believe gender is necessarily fixed, but it certainly has a binary status in our language. Whether the sources actually identified as one of two genders or not, our magazine certainly identified them as male or female; no articles used “s/he” or mentioned any other gender. Due to the superficiality and time constraints of this survey, it’s not possible to tackle the language problem right now. However, I would love to hear your thoughts on how this might be possible in the future. Email [email protected].