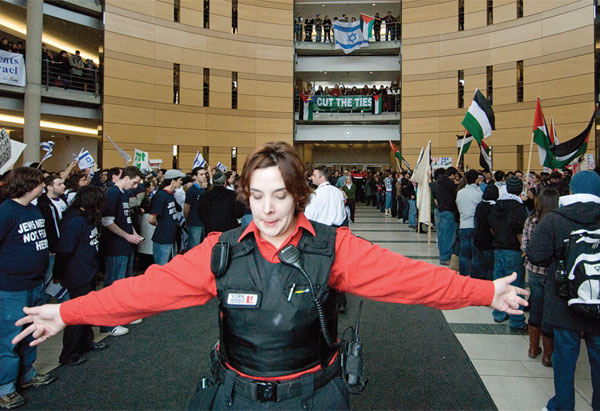 It started out on a hopeful note. To kick off the second hearing of the Canadian Parliamentary Inquiry into Anti-Semitism, Dr. Manfred Gerstenfeld, director of the Jerusalem Center for Public Affairs, flew to Ottawa at the committee’s request to testify [PDF]that Canada is a “pioneer” of university-campus anti-Semitism. Faster than you can say “Oy vey!,” his statement became the headline on a press release [PDF] issued by the Canadian Parliamentary Coalition to Combat Anti-Semitism.

Jews are special—we now have our own parliamentary coalition devoted to protecting us from Jew-haters lurking in the ranks of Canadian liberals and leftists. Seriously: Lawrence Hart, of the Canada-Israel Committee, wrote in 2003 that we should identify “the forces of anti-colonialism, antiimperialism, anti-racism and pacifism as major facilitators of today’s anti-Semitism.”

The CPCCA, established by Conservative Minister Jason Kenney and Liberal MP Irwin Cotler, is designed to combat the growing anti-Semitic menace—especially in universities. They want to expand the definition of anti-Semitism to target any “unfair” criticism of Israel and Zionism. The headache for the CPCCA? Their handpicked witnesses are totally lame.

The CPCCA invited 22 Canadian universities to send representatives. Sadly, only a few actually showed up—it was snowing that day. Dr. Fred Lowy, former president of the infamous Concordia University in Montreal— where they had a riot when Israel’s former president, Benjamin Netanyahu, tried to speak there—deflated their mood with a bummer of a statement [PDF]: “By and large, Canadian campuses are safe and are not hotbeds of anti-Semitism of any kind.”

Undaunted, the CPCCA scheduled additional hearings and eight more universities testified. They, too, failed to expose the anti-Semitic peril brewing under their noses. Dr. Jack Lightstone, Brock University president, Concordia veteran, and scholar of Judaism, brushed aside the entire premise of the hearing [PDF]: “Criticism of any government’s policies, by anyone, must be acceptable, and in universities is to be encouraged,” he said. The CPCCA did not bother with a press release for that one.

Doron Horowitz, director of community security for Toronto’s United Jewish Appeal, an umbrella organization for several major Jewish organizations and charities, perked things up for the coalition members. After listing his Israeli Defense Force counter-terrorism bona fides and elaborating on his connections to various police and intelligence agencies, he testified there is proof of a demonstrable rise in anti-Semitic incidents: Toronto’s February 2009 York University fracas between students representing Israel and the Palestinian rights movement. [PDF]

Considering the fact that the swarm of news reporters, campus security guards, and university administrators present at the event failed to document any anti-Semitic insults, threats or actions, Canada’s Israel lobby showed considerable chutzpah by entering uncorroborated incidents from that day into the country’s record of anti-Semitic acts. Voila! York University is the current official hotbed of Canadian anti-Semitism. Finally the CPCCA asked a group of Canadian police chiefs to testify. They all reassured the committee they work closely with major Jewish organizations to investigate and prosecute hate crimes. But they had no evidence to indicate Jews live under exceptional threat from hate crimes. (Or perhaps the chiefs’ suspicious downplaying of the danger could prove how vast this anti-Semitic conspiracy really is.) The Toronto Police reported that while Jews do report a large number of hate crimes directed against them in the form of mischief, like graffiti, it is lesbians, gays, bisexuals, and trans people who suffer the highest number of assaults and physical threats among all reported hate crimes. No mention was made of starting a parliamentary coalition investigating homophobia.

Fortunately, our elected politicians are here to save the day for the Israeli government. They are voluntarily targeting Canadian public activities critical of Israeli policies and Zionism. Provincial and federal politicians publicly denounced Israeli Apartheid Week, which took place on Canadian university campuses in early March, as “anti-Jewish hate fests.” Schools were pressured by the Israel lobby to ban the “anti-Semitic” event. A “biased” photo exhibit of Israeli soldiers and Palestinians was hastily removed from a library by the mayor of Côte St-Luc, Montreal. The federal government’s minister of science and technology threatened to defund an academic science organization for holding an “anti-Jewish” conference on the “two-state solution” for Israel and Palestine. The government says it is showing “zero tolerance” for “anti-Semitism” and “Palestinian terror” by cutting off funding to human rights organizations that endorse the “Boycott, Divestment and Sanctions” campaign directed at pressuring Israel to change its policies toward Palestinians.

The problem is that just like the CPCCA, these individuals and organizations are unable—despite investing serious time and effort—to show that criticisms of Israel’s policies are, in fact, rooted in bigotry against the Jewish people. That, of course, is because the origin of these critiques is not anti-Semitism; it is the conduct of Israel’s government. But that doesn’t stop the CPCCA from crying wolf.

Israel is desperate to improve its sullied image while muzzling its critics. The latest “Re-brand Israel” tourism effort is the “Size Doesn’t Matter” campaign. It was introduced by a video parodying the double meaning of Israel’s small size and an Israeli man’s penis. What were they thinking? Did Howard Stern design the campaign?

And there was more bad news for Israel: a parliamentary motion to denounce Israeli Apartheid Week was defeated on March 11, and the Bloc Québécois recently quit the CPCCA, declaring it “biased” in favour of Israel and against the Palestinians. Will the NDP stay in? Or will they, too, wilt under pressure from Canadians opposed to the new Jewish censorship and attacks on civil rights?

Anti-Semitism is real and it is always wrong, but the Israel lobby does Canadians no favours—nor Jews, frankly—by hysterically hurling accusations of “anti-Semitism” at Palestinian rights supporters and inventing trumped up anti-Semitic incidents.

From overcoming vicious crimes against my people, the fight against anti-Semitism has been hijacked to protect Israel from actions to end its illegal occupation and the expulsion of Palestinians. It’s cynical and— like the misguided “size doesn’t matter” ad campaign—it’s become a joke.