[Editor’s note: Heat has been out for some time, but given it’s Earth Day, and also given the recent shutdown of so much air traffic after the Eyjafjallajokull volcano eruption, we thought it wasn’t a bad time to revisit it here.] 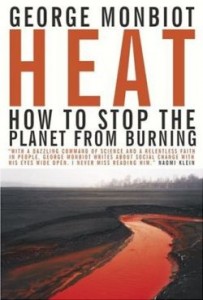 Few issues require as much research as climate change science. You have to know a whole lot about the biosphere, about energy, about the politics of adapting to climate change and investing in mitigating tools. It’s a confusing, and daunting, mass of information. George Monbiot, however, appears to have done a good job getting through what appears to be all of it, and he shows it in his book, Heat: How to Stop the Planet from Burning.

In a chapter discussing the incredible damage done to the environment by our growing penchant for traveling by plane, Monbiot states the case—both for and against—for practically every alternative. He steers us through the pros and cons of planes using, say, hydrogen; of supersonic planes which travel in the stratosphere rather than the troposphere (apparently a very bad thing); and of taking trains across great distances instead. His conclusion: we have to dramatically—perhaps by about 96 percent—reduce our flights. There’s simply no alternative fuel and no way of making our current fleet, or any conceivable one, efficient enough to carry on the way we do.

And this recurs throughout this dense and informative book. Monbiot’s essential claim is that by 2030 we must reduce our carbon emissions by 90% if we hope to preserve something resembling our current ecosystem. This is possible, he says, if we can muster the political will. He even says it wouldn’t alter our lifestyles by very much. We can still enjoy comfortable, modern lives.

But, of course, it’s difficult to imagine the political will being there when it counts. His chapter “The Denial Industry” displays with great force the extent to which oil industries and others invested in making money off damaging the planet have gotten their foot in the door of the media and government in order to misinform the public about the seriousness of climate change. The task of getting our public officials to think beyond upcoming elections and towards the overarching responsibility to our environment is immense, but Monbiot believes it’s one we can still achieve.