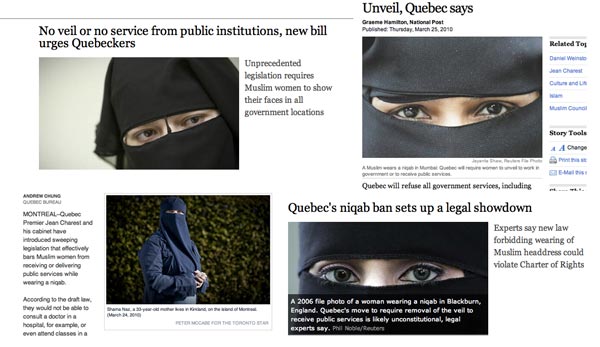 Newspaper photo editors show their creativity when selecting images for this story. Bottom left is from the Star, that actually dispatched a photographer instead of using the file-photo cliché of "eyes peeking through veil"

Quebec is going ahead with its ludicrous ban on religious head-coverings like the niqab and the burka on provincial government property. It’s an astonishing piece of legislation that manages the improbable feat of being baselessly arbitrary and obviously xenophobic. The whole law is crafted to be targeted at a single identifiable—and extremely tiny—minority, but Premier Jean Charest swears up and down that it’s simply intended to ensure that everyone has to show their face to get government services. But everyone understands that the real point of the law is to get a handful of observant muslim women to take off their niqabs—just Google “niqab ban,” and it’s pretty obvious that everyone knows the score. It’s a creepy piece of social engineering, with added bonus dashes of Islamophobia and paternalism.

Constitutional experts called up by newspapers are pretty unanimous in their opinion that this is unconstitional and will be challenged right out of the gate:

“This legislation will probably be considered a breach of human rights,” said Lorraine Weinrib, a leading constitutional expert and professor with the University of Toronto’s law school. […]

By cutting off access to such services to health care and education to women who are following Muslim dress codes, Ms. Weinrib said Quebec is “discriminating” and “disadvantaging” people on the basis of their religion and gender.

“Denying people health care or other government services is such a draconian result, it seems extreme,” she said.

The Law is Cool blog has an extended post today on the niqab law and why it is both legally and ethically untenable. I would encourage you to give it a read — it gives a lengthy primer on some of the core principles of Canadian charter rights, and how they apply specifically in this case. And it goes deeply into the complexities of religious and cultural accommodation: It’s perfectly reasonable to query the religious, social, gender, and cultural dilemmas posed by the niqab. The reasons that some women wear them are numerous and complex—I even believe that quite a few of them are not good reasons, but it’s not up to me.

Cynically, I think the Charest government knows that the law is unconstitutional, and is introducing it to stir the electoral interest of a (depressingly large) segment of society that mistrusts immigrants in general and muslims in particular. There’s nothing like a manufactured bogeyman to spook the base into action.