We must protect women from religious coercion… 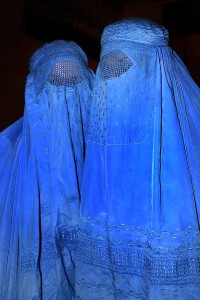 Banning burkas has long been a popular idea among immigration hardliners on the European right, who claim that the head-to-toe woman’s garment is a matter of national security. Canadians may scoff at such paranoia, but the idea is gaining some momentum here, and the push is coming from an unexpectedly liberal source. Last October, the Muslim Canadian Congress asked Ottawa to introduce legislation outlawing both the burka and niqab, calling them “political symbols of Saudi-inspired Islamic extremism.”

While MCC senior vice president Salma Siddiqui argues the ban is needed to address possible security risks posed by citizens who can’t be easily identified, it’s not the organization’s only concern. Indeed, second to security, the MCC has some underlying (and more compelling) feminist goals. Just ask MCC communications director Farzana Shahid-Hassan, who accuses Islamists of pushing back the equality clock, telling media: “It is of utmost importance that the Canadian government take the lead and end this medieval misogynist practice once and for all.” Both she and Siddiqui dismiss the notion that burkas are protected by the Charter’s right to religious freedom. For proof, they point to prominent Egyptian imam sheik Muhammad Tantawi’s edict declaring the garments a cultural tradition—not a religious duty. “It cannot be argued anymore that [wearing the burka] is a religious right,” says Siddiqui.

…but banning the burka is not the answer

Last June, French President Nicolas Sarkozy slammed the burka during a joint session of parliament: “In our country, we cannot accept that women be prisoners behind a screen, cut off from all social life, deprived of all identity.” Though Sarkozy might find it difficult to imagine anyone choosing to don a burka, not every woman who does is forced to. “It’s insulting to the intelligence of women who wear the burka to say they oppress themselves by making this choice,” says Alaa Elsayed, Islamic Society of North America-Canada’s director of religious affairs. The key word here is choice. In Canada, there are no reasonable grounds to ban any form of religious or cultural clothing, and though sheik Tantawi’s liberal interpretation of Islam is laudable, no one person can determine how every Muslim must observe their faith. Telling women what they can and cannot wear will not address root causes of misogyny and oppression. To do that, we must ensure all Canadians understand their rights while providing recourse for women who feel shunned or threatened by elements in their religious and cultural communities. Anything less amounts to little more than grandstanding.