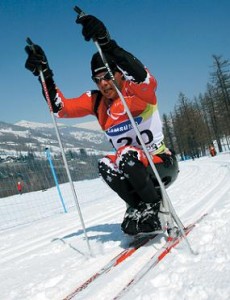 Brian McKeever qualified for the Paralympics and the Olympics, too bad his team started someone else.

Most people think that the ‘para’ in Paralympics means paraplegic, but it actually means parallel. Ironic, since for much of its history, its treatment has been anything but. In fact, the Paralympics has always been that thing that you’re vaguely aware is supposed to come after the regular Olympics, but is never seen, nor heard from unless you really are grinding it out to look.

Most audiences really get into disabled sports when they see them live, or they’re marketed with the right approach, (Remember, Murderball?) but when you combine a lack of coverage with an international community that has largely just begun to realize they should probably let their disabled citizens out of the attic, you basically get an event that looks like it was put together just to save the IOC from a potential human rights quagmire.

Yes, most able-bodied people see the paralympics as an athletic aside. The part that literally no one has energy for after the immense production of the Olympic Games, but I hope now that for the first time — things will be different.

The tickets to Paralympic events are still appallingly cheap, costing between $15 to $175 for the closing ceremonies in Whistler, as opposed to the $800 my family paid for the Olympic closing ceremonies.  A monetary value judgement that says nobody cares. With this information, what can possess me to think that this games will turn a corner?

First, the coverage. This year’s Paralympics features 57 hours of Canadian coverage. (30 in french and 27 in English)  Sure, it seems utterly disparaging when compared against the 2,200 hours of Olympic coverage, but those 57 hours, of mostly replays, tape delays and highlight packages, are the most ever for a Paralympic games. Don’t forget the 150 hours of online coverage.  Plus, packaging Friday’s opening ceremonies with Saturday’s Canada vs, Norway sledge hockey game will give the games almost a day of exposure.

“Is it good or bad? Well, it is better than what they’ve had in the past. There wasn’t anything for the last two [Paralympics], I think, in this country,” Terry Wright, Vanoc’s executive vice-president of Games operations told The Vancouver Sun.

“We’ve certainly had an improvement. I think in general broadcasters see the importance of showing something.”

Exposure is most important because from that comes demand and from demand comes the raising of the overall international profile of the games, which allows the IPC to raise the price of broadcast rights and feed the resulting cash back to further Paralympic development.

Just to get two dozen broadcasters to come out for the games is a victory, since none will make any money from their efforts.

But broadcasting isn’t the only step forward, the other one began during the able-bodied games. That’s when Rick Hansen became the most prominently featured disabled athlete at an Olympic Games as one of the final torch bearers.  Sure, Mohammed Ali had Parkinson’s when he lit the torch in 1996, but he was never originally known as a disabled athlete like Hansen is.  The Man in Motion’s involvement indicated to the world that there would be no prioritizing of able-bodied athletes over disabled ones. The two games would co-exist together as two parts of the same event. In this way, Vancouver took a step towards equality that so many other host cities omitted.

Hansen was also front and centre as a member of CTV’s broadcast team in his regular ‘Difference Maker’ segment. The best of these was a profile of Alexandre Bilodeau’s brother Frederic and his impact on Canada’s first home-soil gold medal winner. It was distinctive for most because it showed how Frederic courage in dealing with his cerebral palsy motivated his brother to shoot for a higher level in Ski Aerials, but with Hansen at the helm there was also a change in presentation that’s rarely seen in mainstream media. When Hansen rolls in, we see him from top to bottom and not from the chest up to hide his chair.  Bilodeau’s CP gives him a speech impediment that would’ve been subtitled if the able-bodied media had final say, but here he can speak for himself.

That mention was heard by over 94% of Canadians and though small, does wonders to instill the idea of an equal relationship between both events and their athletes.This has continued through the marketing campaign. The most popular Paralympic sports (mainly, Sledge Hockey and disabled skiing) have their athletes featured in spots narrated by Donald Sutherland just like the athletes of the regular games.

Let’s also remember that Vancouver 2010 marked the first time an athlete qualified for both the Paralympics and the Olympics. Don’t forget it wasn’t the IOC who ultimately prevented legally-blind cross-country skier Brian McKeever from doing his run, it was his own team who thought they could increase their medal chances with different athletes.

Sure the Paralympics may not have the audience numbers or the big broadcasting support, but as long as the attitude of the organizing committee, the volunteers and the media is that these are meant as a compliment to the main event and not a hastily stitched together addendum — the rest will surely come with time. After all, the entire disability rights movement has moved with baby steps, so why should this be any different?

By the way, those ridiculously cheap tickets are almost all sold-out. For all the concerns surrounding the traditional games, supporting the Paralympics means giving the world’s most undervalued minority a truly equal playing field.