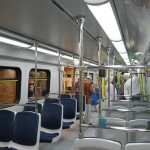 This week, I’m coming to you live and on location from Canada’s Olympic city and the place of my birth. I’m fortunate enough to be staying at my father’s apartment across the street from the athlete’s village, so I’m literally in the center of the action.

I can see the environmentally friendly generator that turns the athlete’s poo into renewable energy from my window, and the Aussie’s Boxing Kangaroo flag that had Jacques Rogge’s panties in a bunch is still flying proudly from the windows of the Australian team’s condominium. But for all the ways THIS Magazine rags on the 2010 Olympic Winter Games, (and we do rag) it seems as though these games are at least setting a new standard for one thing — accessibility.

Arriving here I got to ride what is arguably the crown jewel of the 2010 games’s legacy. For those who don’t know, The Canada Line expands the city’s SkyTrain system from downtown Vancouver into Richmond and ends at the airport.  Just having the system connect to YVR means getting into the city from the airport is leaps and bounds easier than it would otherwise be if you have an assistive device. It’s cheaper too. A wheelchair cab can run you various multiples of ten depending on where you live in the Lower Mainland, while a ride on the SkyTrain from the main terminal costs $7.00. (Although, a few extra coins than the rest of the line.) The signage at the airport and in the elevator clearly marks the path to the skywalk and into the station in big, bright yellow letters. Inside the train is where the Canada Line really earns its medal as the accessibility standard for similar systems.

In the past,  accessible spaces were usually only big enough for manual chairs to fit into and you had to flip up an existing seat in order to park inside. Now, there’s a space for bikes on one side of the train and a long space on the opposite side. It has a handrail and is designated accessible, so it can easily fit electric chairs, scooters and possibly a small all-terrain vehicle. It use to be that poles lining the centre of the cabin meant scooters and large electric chairs were forced to drive on and back off through the same door, but the train itself is wide enough that one could turn completely around in a circle without getting stuck or obstructing other passengers.

There’s only one aspect of the Canada Line that really bothers me. Thankfully, it is limited  to the airport station. The accessible gate that lets people with disabilities and people with strollers onto the platform cannot be controlled by the passenger. In an effort to control traffic, the passenger presses a button that signals a Translink employee on the other side of an intercom and they open the gate for you. Able-bodied passengers that don’t need the gate simply pass between two vertical metal poles without incident — poles that are too narrow for a large wheelchair, forcing those with disabilities to use the gate and rely on the employee.

Coming from a city where transit employees are known to sleep on the job, I can see a scenario where someone is coming home late and inevitably there’s no one on the other side of the intercom to help them. I don’t want to have to give some indifferent able-bodied union employee so much power over when and where I can go at such a crucial point in the process. I do not like to rely on people, when I think there’s a strong possibility they will let me down. I wish deeply that the aid of an employee was optional, so my freedom of movement wasn’t more restricted than other passengers, just because I needed to use the gate.

However, having people with strollers who need to use the gate may make officials much more vigilant than they would otherwise be if they were only dealing with people with disabilities. Besides, I have to remember that the Translink system has much more credibility with Vancouver’s disability community, thanks to how much they’ve done already, so I can’t automatically assume they’re going to screw it up and not be on the ball.

After all, the Olympics haven’t even started yet, and I still have many more venues to assess, including BC Place, GM Place (Canada Place) and Thunderbird Stadium. Once things have ramped up, than we will truly see how good VANOC’s accessibility plan is.

I have to point out though, over the weekend I walked without my scooter to the new Olympic Line Bombardier train, that shuttles passengers between False Creek and Granville Island, on the assumption that it wouldn’t be accessible and (oh, how jaded I’ve become) and was pleasantly surprised to see that it was. It’s nice to know there are still places in the world where officials anticipate the need, rather than react to it. I’m glad I can go home again and know accessibility doesn’t have to be a fight at every turn, it’s just second nature.