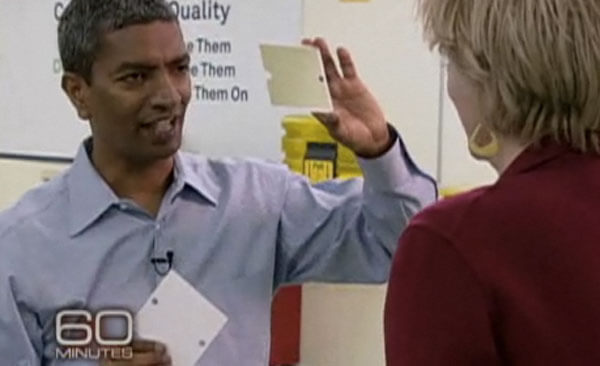 K.R. Sridhar of Bloom Energy shows off a component of his "Bloom Box" to 60 Minutes' Leslie Stahl.

60 Minutes aired this report last night on Bloom Energy, a California company officially launching this week that says it has perfected a fuel-cell technology that is capable of making the conventional energy grid obsolete and producing clean(er), cheap(er) power. I get the strong whiff of bullshit off this whole story, and yet there’s something still irresistible about it: the idea of putting a refrigerator-sized box in your basement that’s capable of powering your whole house is just so enticing.

The thing that appears to set the “Bloom Box” apart from run-of-the-mill cold-fusion swindlers is that the technology is already in use, powering a Google datacentre with natural gas and the headquarters of eBay with landfill biogas. So actual people have paid actual money for these boxes and use the electricity they produce—and are willing to show them off to a CBS camera crew. So, with the usual caveat that when something seems too good to be true, it usually is, and also that highly choreographed public relations campaigns by self-proclaimed “revolutionary” companies make me want to puke, this is still totally worth a few minutes of viewing time.